I’ve lived in Rio de Janeiro for almost one year, but I had never been on a Rio favela tour.

I’d heard awful stories from travelers who felt like residents were dehumanized on the more common “favela Rio” tours. Because I am interested in understanding the history and issues of the favelas, more than photo opps and stylized favela selfies, I had previously opted out…

until I discovered that Context Travel (known for ethical and intellectual city tours) has just started offering its own favela tour, “Future of Favelas Rio de Janeiro” tour in the Complexo do Alemao favela. 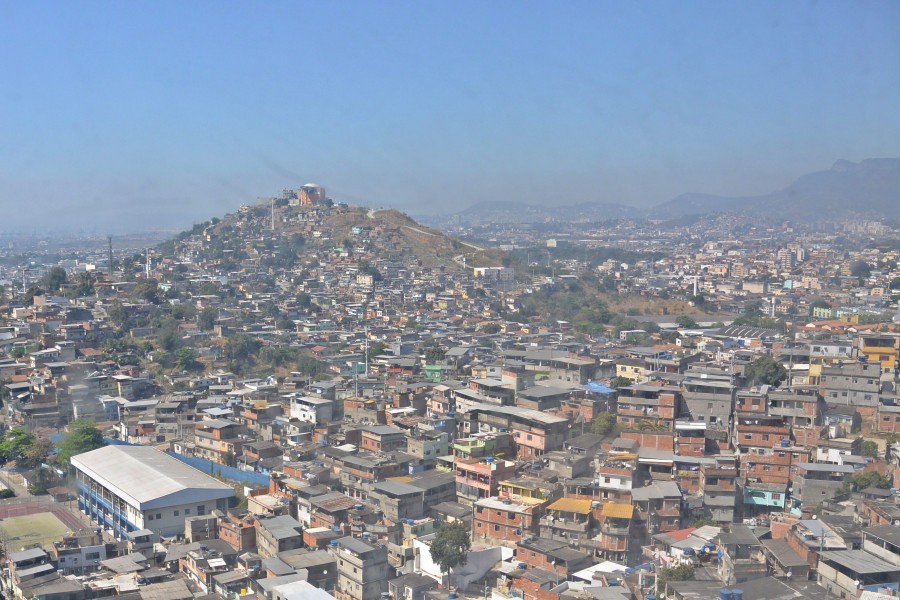 History of Complexo do Alemao Favela

Shortly after World War I, a foreigner bought the huge area of land now known as Complexo do Alemao. Because Leonard Kaczmarkiewicz was of fair complexion and looked European, he was called an alemao (German), even though he was Polish. He began selling the land to leather factory workers a few decades later, which rapidly grew into the favela, or community, it is today.

Around 2010, the Brazilian government began sending in UPP units (police occupation) to favelas to “pacify” them and drive out drug and other criminal industries. As a result, drug traffickers fleeing from the military-occupied Vila Cruzeiro favela escaped into Complexo do Alemao, and began fighting against police. When the criminals refused to surrender, thousands from the BOPE (Brazilian Special Ops), Brazilian Navy, and Brazilian Army invaded the favela, quickly taking it over.

In 2012, the military left the Complexo do Alemao, and the UPP pacification moved in. Since then, an unsteady peace has somewhat existed.

When I visited on August 17, 2015 with Context Tour Rio de Janeiro, the safety situation in Complexo Alemao was unstable. Weekly, unpredictable shootings made entering the streets potentially dangerous. Our tour guide, an urban planner working with the favela, was extremely knowledgeable about the problems the community faces. She provided an excellent balance between personal safety and interesting experience. I appreciated that she was honest about the safety issues, and that she did not take us into an unsafe situation. 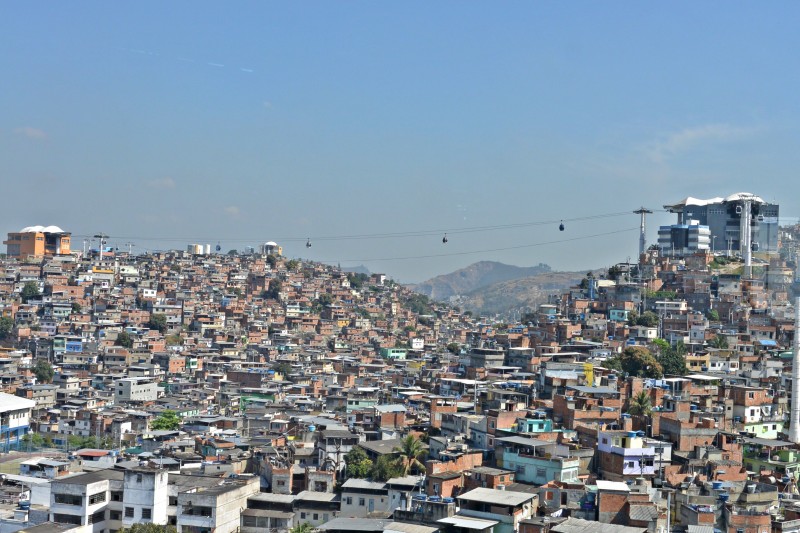 The tour started by taking the Saracuruna Train Line from Maracana metro station, where our guide met us.

We took the train to the Teleferico, which we stayed within the for the Complexo do Alemao portion of the Context Tour. The Teleferico provided outstanding views (the favela is SO big!) and allowed for thorough explanation by guide. 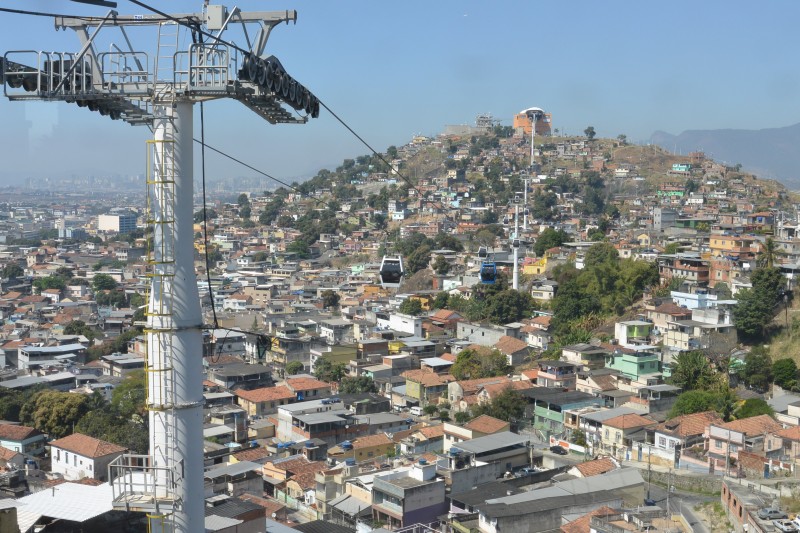 The Teleferico, also known as Bondinho do Alemao, or the Gondola lift, is a new addition. It was created to span the Complexo do Alemao and give residents easier access to come in and out of the favela.

With 152 gondolas (each holding 10 passengers), the Teleferico is 3.5 kilometers in length with sixth stations. It takes about 15 minutes from start to finish, and connects to the Saracuruna Train Line at its initial station. 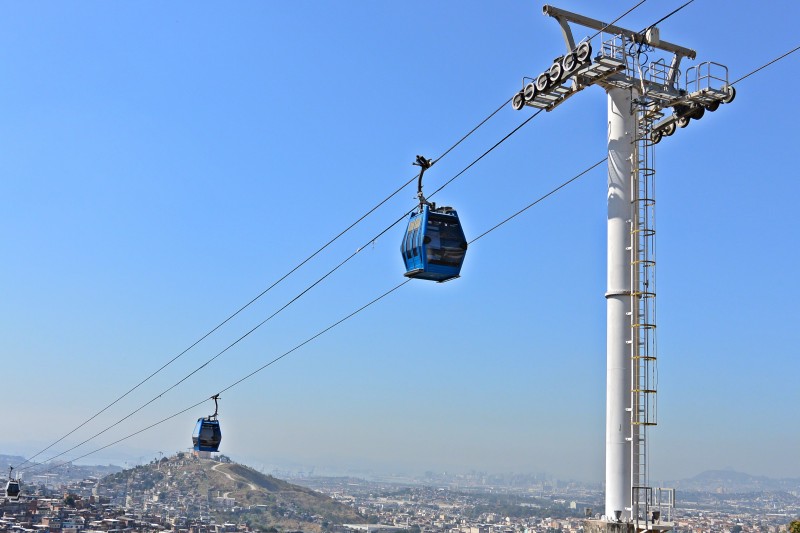 Residents of the favela are allowed two free tickets per day, and visitors are supposed to pay BR1, though when I toured it was included in the Saracuruna train ticket. 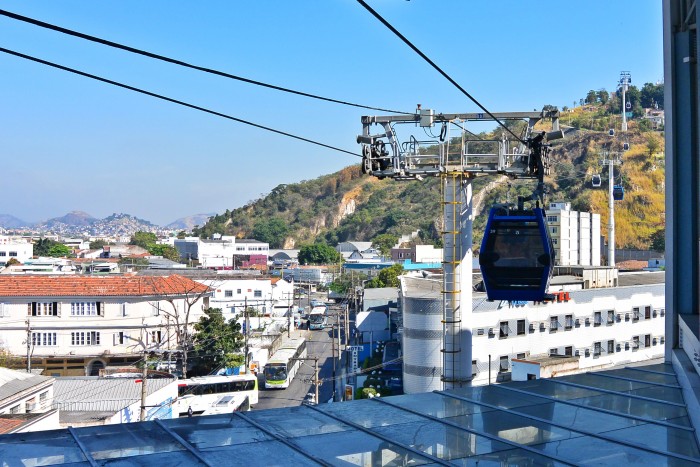 Each of the six Teleferico stations also has a community center underneath for the residents, offering different services such as health centers, continuing education classes, public computer access, and libraries.

The Teleferico is becoming somewhat popular with tourists who want to see Complexo do Alemao. Vendors have started selling local artwork outside the community centers, offering a great opportunity to support the residents. 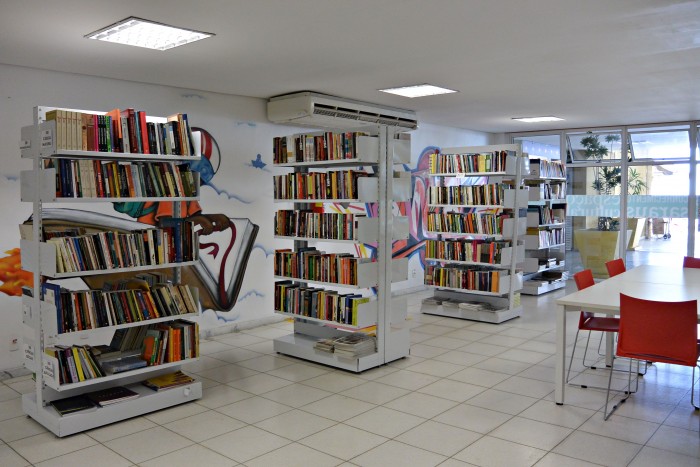 After taking the Teleferico route, viewing various stations and their community centers, we returned on the train to Maracana. We visited a school project that Context Travel contributes to, Estrela da Favela. About 50 children from the favela near Maracana attend the school.

In Rio, parents with any extra money always send their children to private school. Unfortunately, many do not have that luxury. Sadly, the public school system in Rio de Janeiro is undoubtedly flawed, with an average of only about 4 hours of substandard education per day. Many kids enter middle school without being able to properly read or write. Too many kids from the favela drop out and enter into drug trafficking or prostitution. 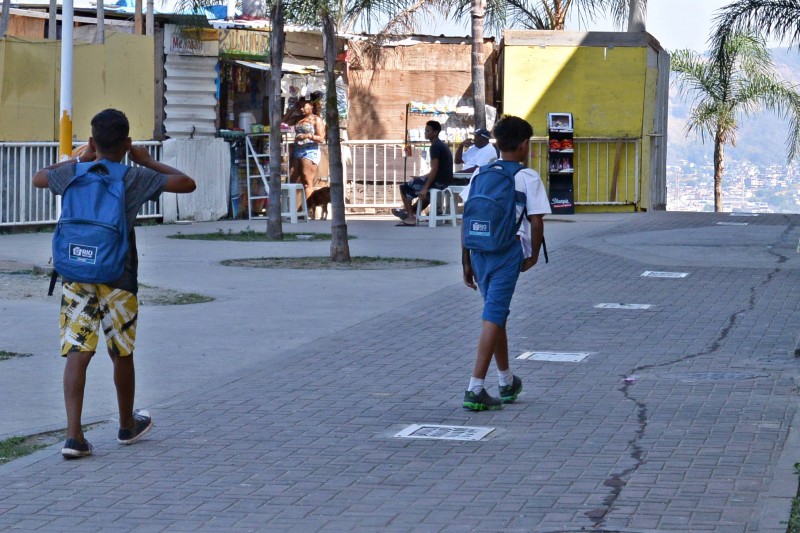 Estrela da Favela is seeking to break the cycle by providing caring, personalized education along with sports activities and nutritional education. The school is working on building a garden behind the building, to help teach the kids about fruits and vegetables. Now, most children eat sugared coffee for breakfast with biscuits or white bread, and then rice with beans for lunch, and perhaps more biscuits for dinner. Their meals are completely devoid of fruits and vegetables.

After visiting the school and learning about the projects, we returned to Maracana station for the end of the tour. 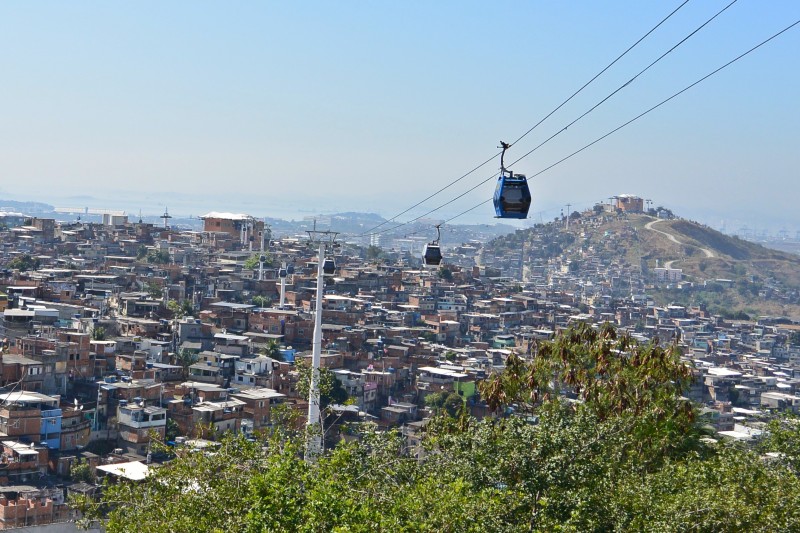 Many “favela tours” in Rio de Janeiro are criticized for treating residents like zoo animals to be stared at. most provide little to no background information, nor ways for tour participants to get involved.

This tour was so entirely different. Context Travel‘s tour guide provided a compassionate, action-oriented perspective that should be a model for all community tours.

A major annoyance for many Rio de Janeiro tourists is LATENESS. Most Cariocas run 1 to 2 hours late. Our Context Tour travel guide was not only on time, she was quite early. The tour went exactly as long as it was supposed, and didn’t run too short or too long. Throughout the tour, the guide made sure she was answering all of our questions, and checked in repeatedly. Her high level of professionalism and attention to detail shouldn’t go unnoticed or uncomplimented, and definitely shouldn’t be taken for granted as it is quite uncommon for tours in Rio de Janeiro!

**I participated in this tour for free, but all opinions, perspectives, and reviews are mine. I was not obligated to write a review** 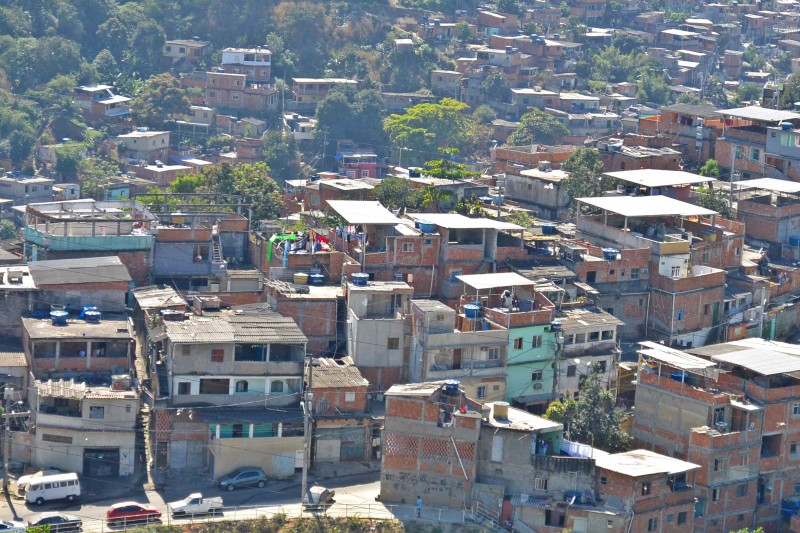 What Else to Do in Rio de Janeiro
Check out my full guide to Rio de Janeiro here, which includes the best suggestions for hiking (including my favorite Morro do Leme hike), where to eat, weekend getaways from the city (including Buzios), and the best beaches.
You can read every article I’ve ever written about Rio de Janeiro (and there’s a lot: I lived there for almost two years!) here.
Viator offers a bunch of different Rio de Janeiro tour options, including for visiting Christ the Redeemer, and provides excellent customer service and refunds if anything goes wrong — much more than local operators would do.
Where to Stay in Rio de Janeiro
If you have around $100 per night to spend, you can’t get a better value than Rio 180 hotel — each room is a suite and has its own private hot tub along with incredible views!
For a wider range of pricing options, check here or Airbnb is a great value in Rio de Janeiro. You can use this link for 39USD off your first stay!
How to Arrive to Rio de Janeiro
You can take the bus into Rio de Janeiro from many destinations within Brazil, but most people choose to fly. While Copa Airlines isn’t my favorite carrier, they do usually offer the cheapest flights. To check the latest low prices on airfare to Brazil, try Skyscanner , or if you have some date and/or destination flexibility and want to score the absolute lowest prices, try Kiwi.com.