My family (consisting of my fiance Ran, my pup Mickey, and myself) left Rio de Janeiro, Brazil for Puebla, Mexico early this year. 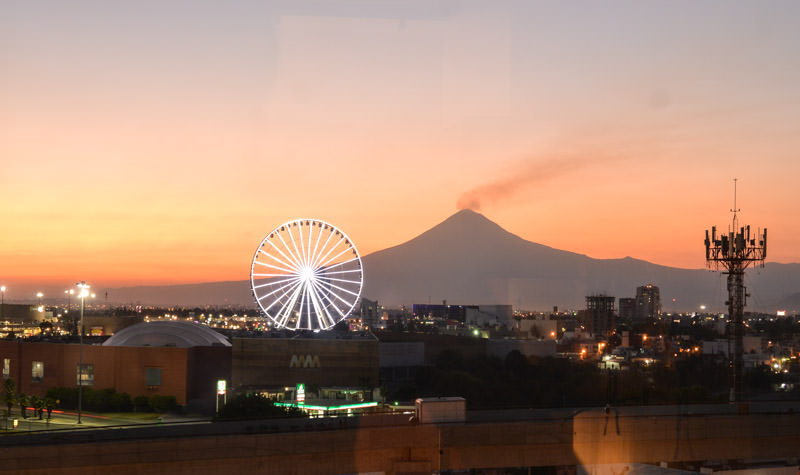 the sunset view from our apartment balcony in Puebla

A work situation changed, and we needed to relocate. After just four months in Puebla, we were already (re)packing our things with intense disappointment and dread [and not just because I have a SERIOUS aversion to move-packing]. 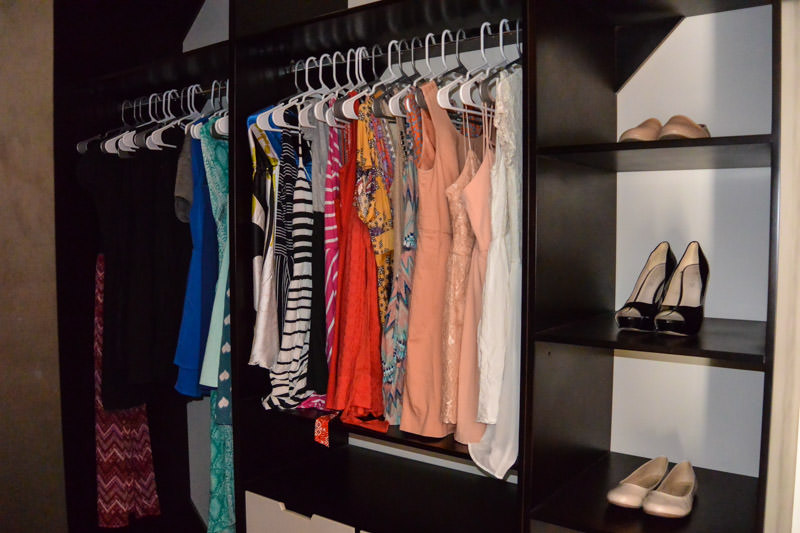 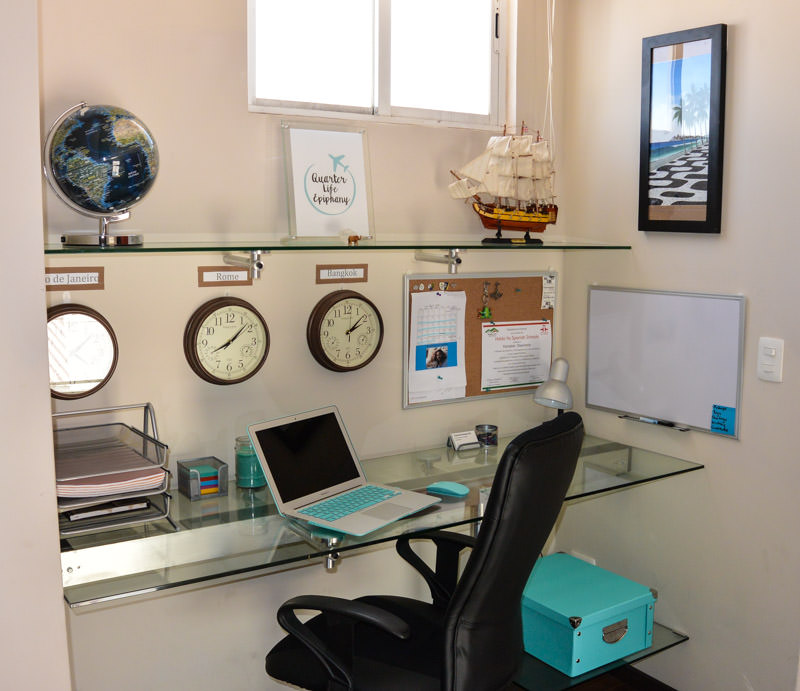 I also didn’t want to leave this closet or office behind!!! 🙁

Every other major move has been really exciting for me, and looked forward to… sort of like a semi-permanent trip.  But the move from Puebla was the least positively anticipated I could ever imagine (not just because we were bummed to leave after such a short time).

After Puebla, Ran got transferred to a city I NEVER thought I’d live in, to a city I would NEVER choose to live in. Never. Ever. Cross my heart and hope to die, little kid style.

I’d heard so many awful things about this no-man’s land. Who would chose to live there? I imagined it to be a sort of city style hell: gray and grim, dangerous and dark, complicated and confusing… and as many other negative alliterations as you could possibly imagine. I was so upset and fearful, I didn’t even Google about the new city, I didn’t want my fears confirmed. [Partial] Ignorance is bliss?

It was with a heavy heart and super super super anxious stomach that I bid farewell to Puebla as we set off for our new, unwanted home.

The first day we arrived sucked. It fulfilled all of my worst expectations. We stayed in a tiny one-room apartment with a broken light in the bathroom and no exterior windows. The noisy traffic from the street made it difficult to get any rest, and the cramped quarters made it too easy to get on each others’ already frazzled nerves. I felt uncomfortable and lost on the chaotic streets, and couldn’t even find anywhere to eat lunch as a vegetarian, and had to settle for a Starbucks sandwich (the most shameful travel activity I could think of, really… eating at an American chain restaurant my first day in a new city). I was angry at everyone and everything.

By some small fortunate turn of luck, I quickly found an apartment that met all of our requirements (aside from a bathtub… still waiting on that bathtub) – in addition to a turquoise wall so obviously I was sold on it – and the owner let us move in later that day.

We waited in a rented van on the dark and creepy street outside the unfriendly building surrounded by thick black metal walls, giving me plenty of time to notice the unfriendly prisonesque facade. The porteiros wouldn’t let us in because we didn’t live there (duh, we’re moving in). What they did do, however, was open the heavy steel security gate for another resident’s car – directly onto our van, scraping the shit out of the side of it.

As the owner of the apartment came down to explain the situation to the guards, and we circled around the block, I felt seriously close to losing it. The streets were empty, almost deserted, and the surrounding buildings looked unwelcoming, with some in various stages of construction. This did not look like a friendly neighborhood I’d want to live in. Were we seriously doing this?!

After a few exhausting hours of unpacking, we decided to call it a night. A very anxious, tossing and turning, nightmare-filled night.

Somehow, I woke up in a hopeful frame of mind (god fricking bless the restorative power of sleep and the contagious positivity of dogs).

The sun streamed in, filling the apartment with light and brightening not just the rooms but also my attitude. We took Mickey for a walk, and I saw how lively and energetic my new home street becomes during the day – street stalls hawking every possible local dish (at rock bottom prices), and office workers scurrying to and fro their buildings. I noticed the endless green trees lining the streets, dark blobs in the nighttime, but in the daytime adding fresh air and a more neighborly feel.

The more days spent in my new home, the more I became SO happy and SO thankful we ended up here.

the sunset view from my new home in Polanco, Mexico City

My neighborhood is home to museums galore, parks, AMAZING food, and so much more. 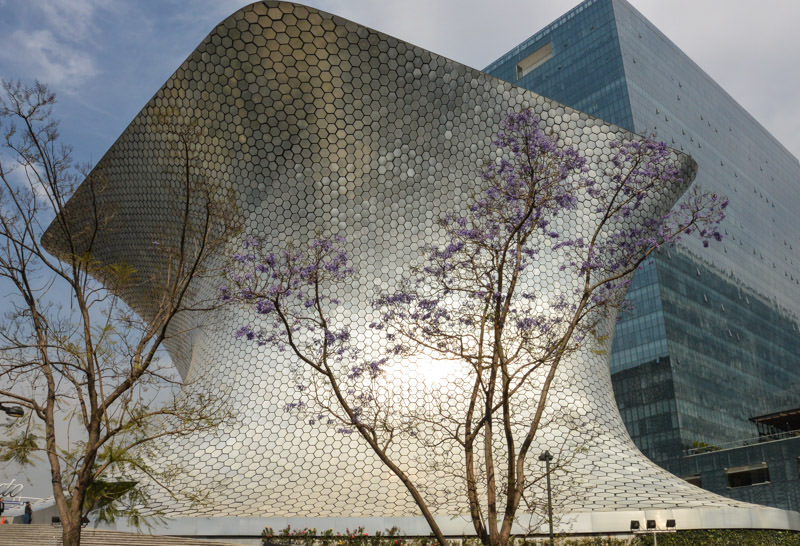 Actually, my new home even one-ups my American experience… the bowling alley serves Corona and enchiladas (and NACHOS!), the movie theatre offers NACHOS (and salsa for your popcorn, you’ve gotta try it), and the big supermarkets still have traditional local standbys like handmade tortillas and freshly made salsa. But seriously – NACHOS! 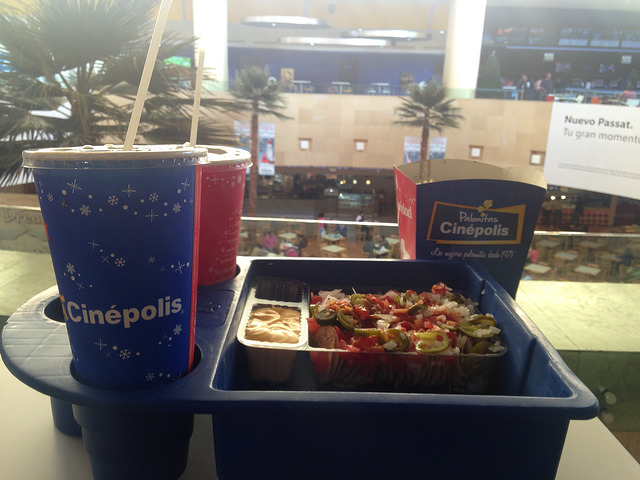 So it’s probably pretty obvious by now, what with the nachos and enchiladas and tortilla talk: I still live in Mexico.

To be more exact, I live in the Polanco neighborhood of Mexico’s capital (and maybe its most feared and misunderstood city, especially for Americans, including me) – Mexico City.

While I enjoy finding new places (and let me tell you – Mexico City is full of endlessly interesting nooks and crannies to explore), I also love coming back to old favorites. In fact, I spend a lot of time quite close to home. I’m quite enamored with my own neighborhood. 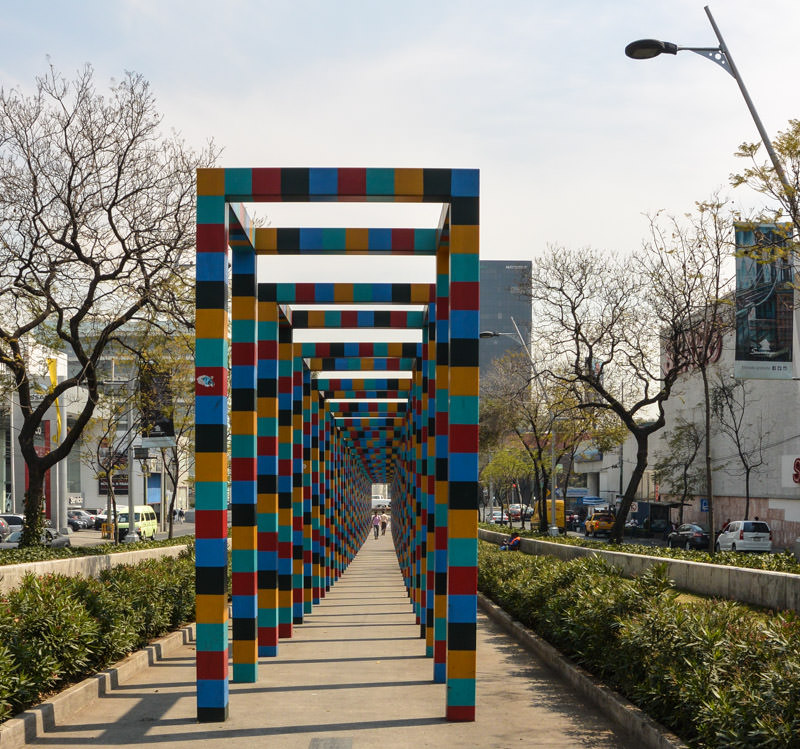 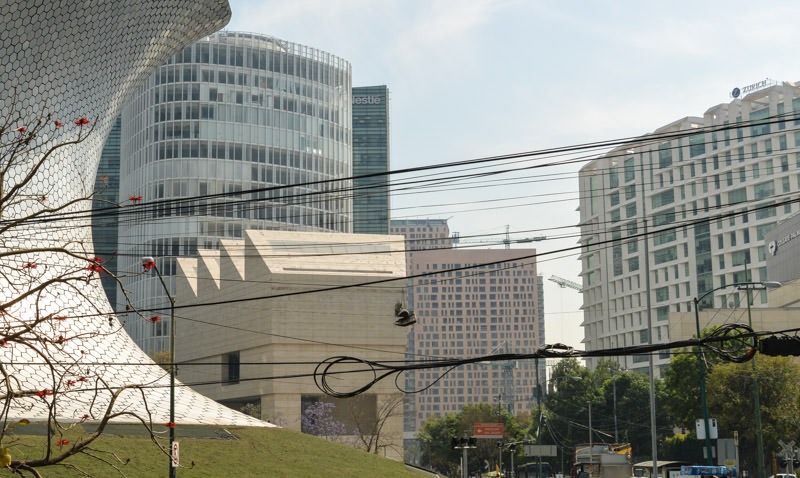 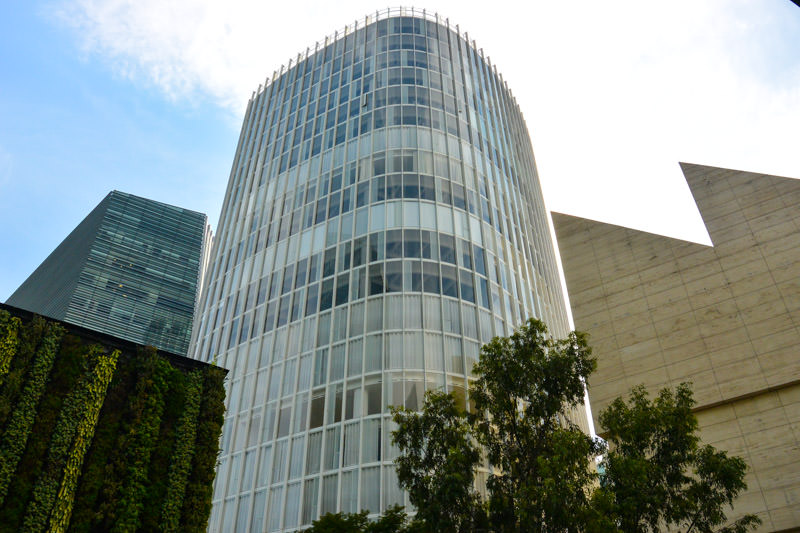 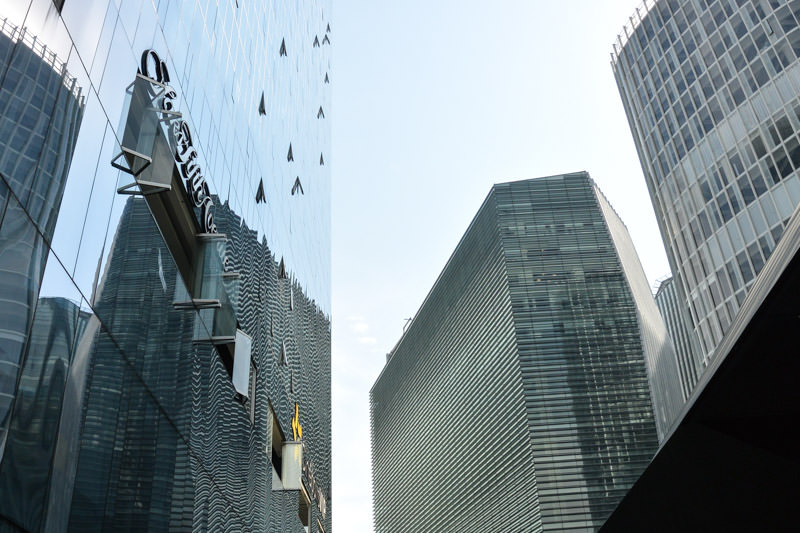 Polanco is stereotypically known for big malls and major money (some of the richest families in Latin American have homes in Polanco). But the area is also packed with museums and awesome food like I mentioned above and cool shops. It also has the perfect sidewalks for strolling, especially with my dogs in tow. It’s conveniently located to my other favorite neighborhoods (including two of my ABSOLUTE faves, Roma and Condesa), and feels spectacularly safe.

Part of very notable Chapultepec Park is within Polanco, along with Parque Lincoln, Parque America, and Plaza Uruguay.

Museums like the fabulously free Soumaya, its neighbor Museo Jumex, the National Museum of Anthropology, the Modern Art Museum and Chapultepec Castle are all within Polanco or just a short walk away.

Polanco is also home to some of my favorite fancy veg-friendly restaurants, and simple veg street food. It also hosts Saks, which has one of the swankiest brunches in the city with vegetarian (and vegan) options galore, and a dedicated mimosa waiter wandering around (delicious but definitely not cheap). 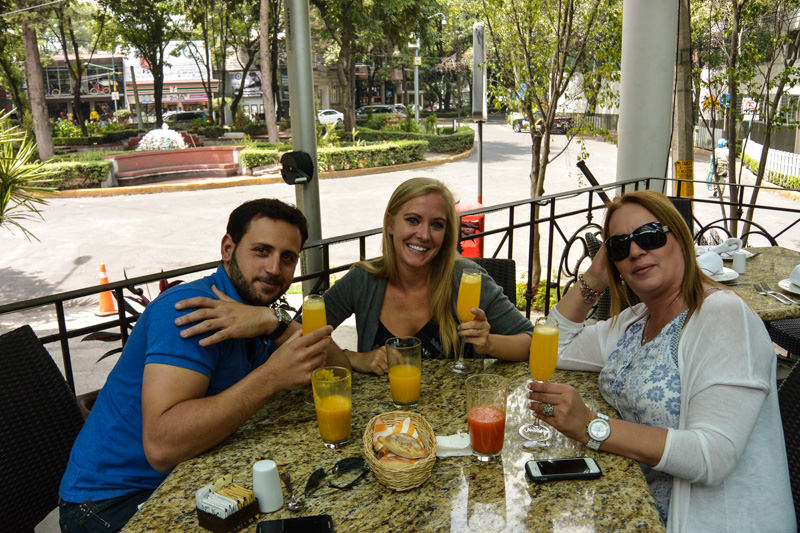 my fiance, me, and my MIL mimosa-ing at Saks Polanco

So, I live in an awesome neighborhood in awesome Mexico City. I could go on and on and on and on about how awesomely fun this city is – both for visiting and for living (which is rare as hell). I really don’t like bragging [usually], and I definitely don’t love every place I live (cough cough RIO DE JANEIRO). So why am I going heavy on the brags now?

To be honest – I’ve been quite shocked and disturbed by people’s reactions (especially you Americans) when they hear where I live. 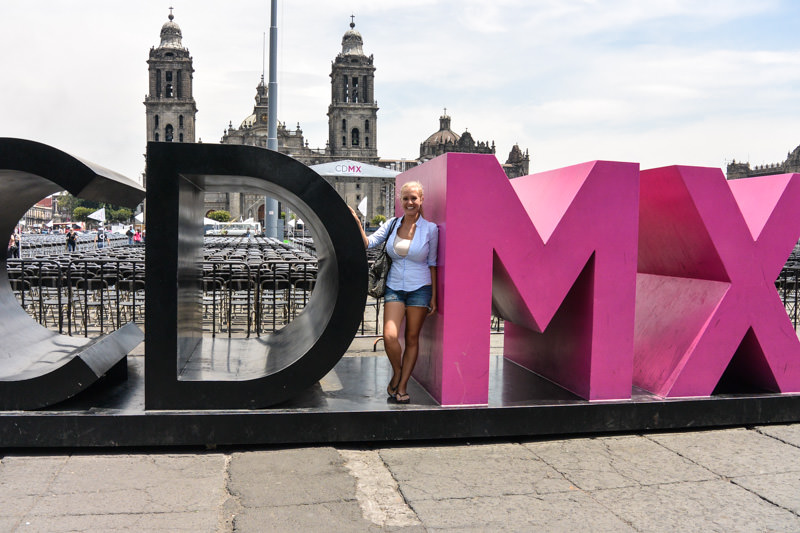 When I tell someone I live in Mexico City, I inevitably get one of the following responses:

I’m not trying to paint a sunshine-and-rainbows-forever vision of Mexico City, or even my neighborhood Polanco. It has problems and issues like every other city, but it definitely shouldn’t be unfairly (and unrealistically) demonized.

So let’s be real. Mexico City has sketchy neighborhoods. But so does Chicago…. and so does pretty much every mid-size and larger city in the US. I used to live in Grand Rapids, Michigan, which is as Midwesternly sweet and “safe” as anywhere else, but there are still areas of the city that I wouldn’t want to go in alone, and especially not at night.

If you’re avoiding Mexico City because you don’t like museums, beautiful old buildings, awesome cheap as hell food, and some of the friendliest locals on the planet – good. You should probably stay away. 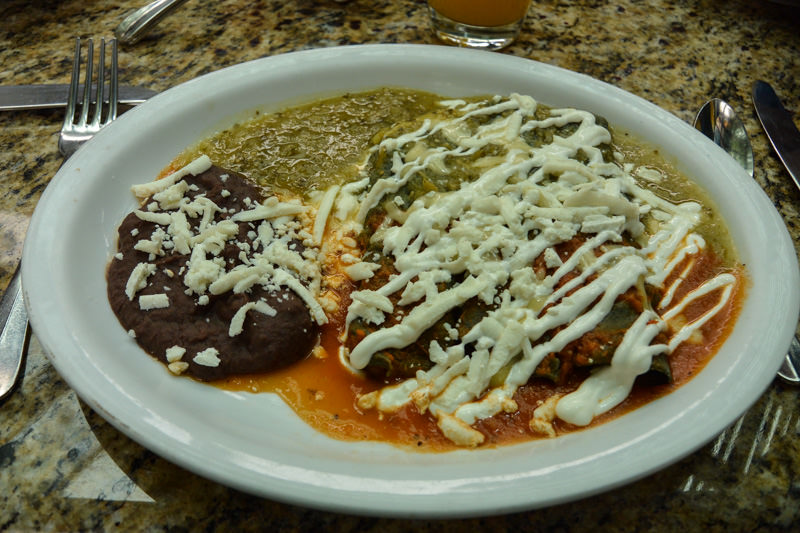 But if you love learning and food and parks and have an open mind and you’ve just been avoiding Mexico’s capital because you’ve heard it is grey, boring, or dangerous (like I did) – you should probably jump on Skyscanner right now and book the coolest trip you’ll ever take and would never expect.

And if you’re like I was with an opportunity to move here, but you’d never in a million years chose to live in Mexico City, please do yourself a favor and be less willfully ignorant than I chose to be. Talk to people who actually do live here, do just a bit of Googling, or take a minute and send me an email. I’ll be happy to  answer any questions you might have. 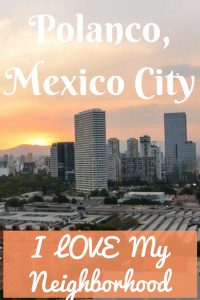 Do you love your neighborhood? Would you ever live in Mexico City?

A short vacation in Thailand turned into a life abroad with a canceled ticket home. Nearly a decade later and after living in Bangkok, Rio de Janeiro, Puebla, and Puerto Vallarta, Steph is on to her next adventure and living back in beautiful, cosmopolitan Mexico City. She is traveling, working, and living around the world to find the beautiful, inspirational, and interesting while sharing it with you!

I’m a Michigan girl turned serial expat and travel addict. In the past 10 years, I’ve lived in Thailand, Brazil, and now Mexico, while visiting more than 30 other countries. Currently, I’m living in Mexico City with my pup Felix, boyfriend, and maybe too many houseplants.
Aside from a traveler, I’m also a psychotherapist (sign up for a session with me here), travel and expat health insurance representative, a dog-hugging animal lover, and persistently subpar language learner.
No matter where I’m at, I’m always in search of delicious vegetarian dishes, intentional insights, and the next beautiful adventure.
Join me as I explore expat life and international travel – through all the joy and journey!