Living in Rio de Janeiro is not a perpetual vacation, contrary to what many may think, and sometimes its nice to break up your regular weekday routine with a weekend getaway – even if you don’t go far. So I escaped out of Copacabana and into Santa Teresa with my fiance for a weekend staycation at the Rio 180 Hotel.

What was supposed to be a relaxing weekend away actually didn’t begin so well. We couldn’t find the hotel, and neither could the taxi driver. We drove back and forth on the street, and none of the neighbors knew where it was located or had even heard of the Rio 180 Hotel.

Eventually, against the taxi driver’s advice, I got out at what was supposed to be the Rio 180 hotel (according to the tiny house number sign), but appeared to be a private residence. Just a blank white gate and wall. Even though there was no hotel sign, I pressed the buzzer anyway. And waited. After a few minutes, a man peered out, and confirmed that it was the Rio 180 hotel. Strange.

Upon entering, the hotel was immediately captivating and all stresses about not finding it faded away. The sounds of the street are completely blocked out, and its feel as if you have entered a private oasis. There are beautifully kept gardens, and orchids everywhere.

The hotel is small, with only around 20 rooms in total, and the quiet hush as compared to a large chain hotel is apparent – and appreciated.

The staff checked us in quickly and efficiently (they speak English, too!), and led us to our stunning suite. 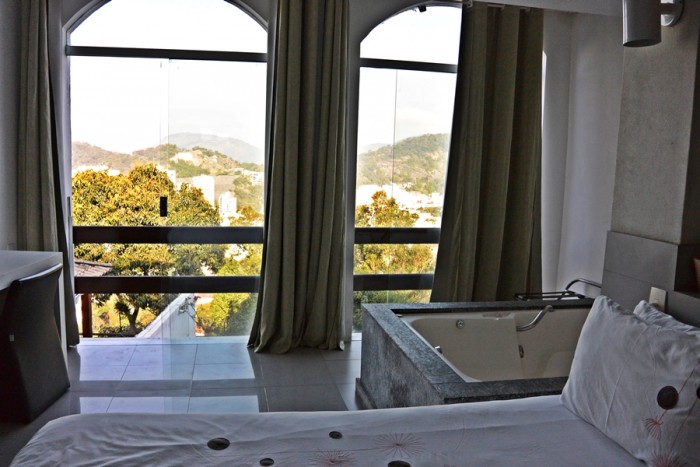 I had booked the Hotel Rio 180 room for $100 a night through Agoda, and could not believe my eyes when we entered. It was an absolute breathtaking suite, and a total steal of a deal.

The Rio 180’s views are without a doubt the best of any hotel I’ve stayed at in Rio de Janeiro. 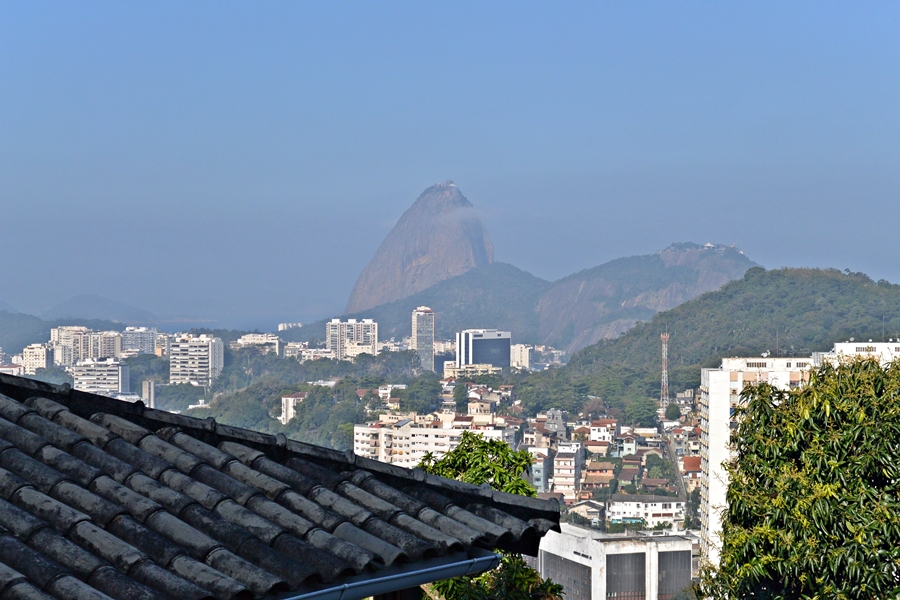 That’s Pao de Acucar, straight out from my hotel room 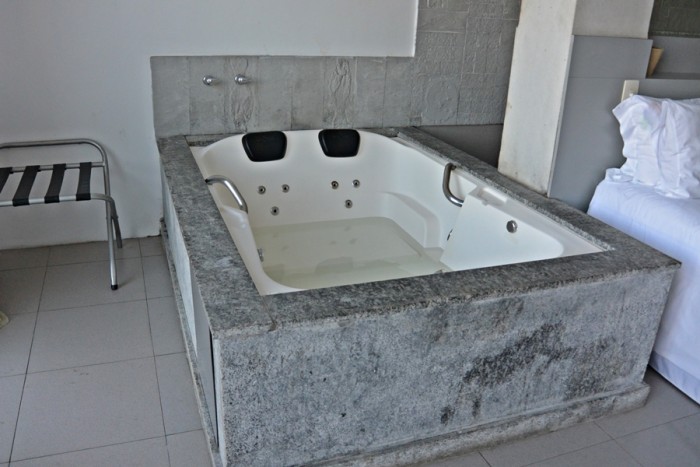 this jacuzzi + those views + a chilled glass of Champagne = YES PLEASE!

Very few things could drag me out of that sumptuous suite.. one being a gorgeous pool. Which, luckily, Rio 180 Hotel also has! 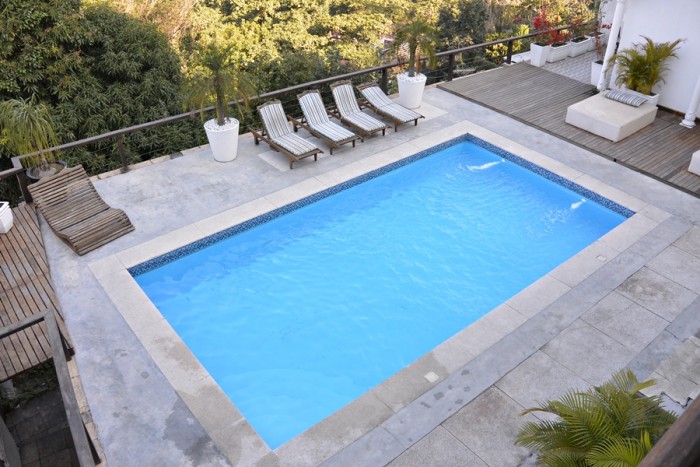 With more than enough comfy loungers to go around, the pool is a great place to chill during the day with a book or a drink, and enjoy the peace and quiet. 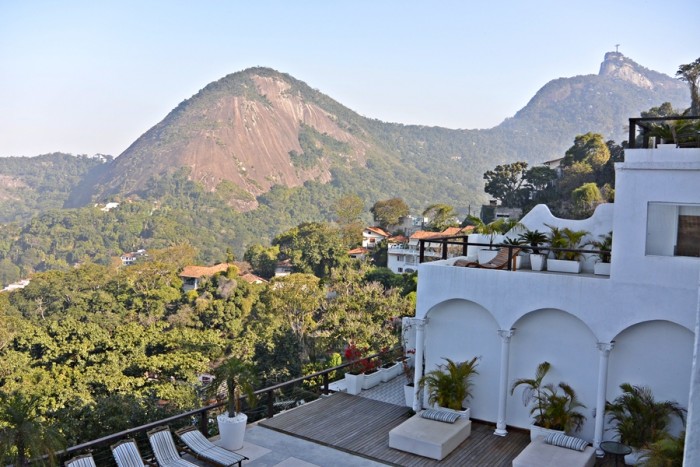 do you see Christ the Redeemer in the upper right corner?

Rio 180 Hotel is located on the outskirts of the Santa Teresa neighborhood, though it is a trek to the main part of the neighborhood. A taxi is definitely recommended rather than walking – especially at night, as it’s a bit of a sketchy area. Santa Teresa is known for its artistic shops, chilled bars, and cool restaurants.

I would definitely recommend heading all the way into Santa Teresa for dinner, as the hotel unfortunately did not have a restaurant open in the evening, and the two order-in options are both awful. You can choose between greasy faux Japanese, or overpriced pizza and sides. We went with the pizza, and after taking almost an hour to arrive, the pizza was cold, and the other half of the order was completely forgotten (a salad). I have to say, it was by far the worst pizza I’ve ever had in my life – and pizza is pretty hard to mess up for me – but that isn’t a reflection of the hotel. I hope they reopen their restaurant soon for lunch and dinner!

The restaurant is (thankfully) open at breakfast, serving a French inspired spread of breads, cheeses, cereals, and fruits on the beautiful rooftop patio. 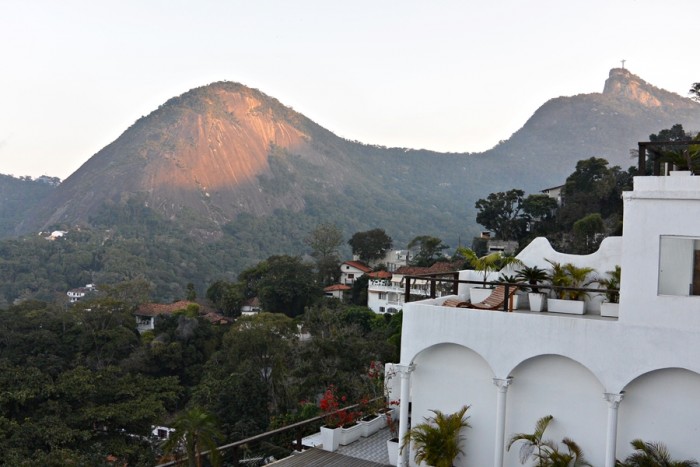 I would stay again in a heartbeat, as the price is almost as outstanding as the views.

I do hope that the hotel fixes a few small issues, such as the lack of signage at the door, adding more dine-in options, and also being more responsive on phone calls and emails. I sent three emails, and called twice, neither of which received replies – thankfully, I booked through Agoda.com and didn’t need to deal with any reservation issues. 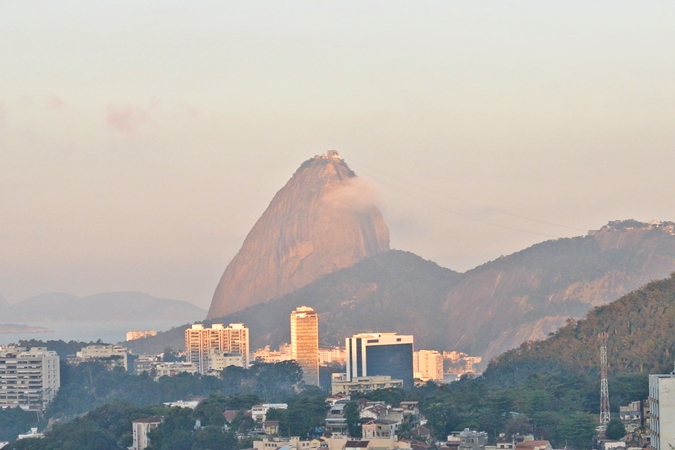 *I was not compensated or provided a discount for my review of this hotel. I booked my accommodation through Agoda myself, but enjoyed my stay enough to share it*

What Else to Do in Rio de Janeiro
Check out my full guide to Rio de Janeiro here, which includes the best suggestions for hiking (including my favorite Morro do Leme hike), where to eat, weekend getaways from the city (including Buzios), and the best beaches.
You can read every article I’ve ever written about Rio de Janeiro (and there’s a lot: I lived there for almost two years!) here.
Viator offers a bunch of different Rio de Janeiro tour options, including for visiting Christ the Redeemer, and provides excellent customer service and refunds if anything goes wrong — much more than local operators would do.
Where to Stay in Rio de Janeiro
For a wider range of pricing options, check here
How to Arrive to Rio de Janeiro
You can take the bus into Rio de Janeiro from many destinations within Brazil, but most people choose to fly. While Copa Airlines isn’t my favorite carrier, they do usually offer the cheapest flights. To check the latest low prices on airfare to Brazil, try Skyscanner , or if you have some date and/or destination flexibility and want to score the absolute lowest prices, try Kiwi.com.