It’s not that I don’t like Rio de Janeiro…

So, I’ve been living in Brazil for almost 9 months now. In that span, I’ve left the country 3 times – to Israel and Italy once, and to the US twice.

When I’m gone, there’s a lot I miss about Rio de Janeiro – the beaches, my apartment, the amazing warm weather (especially when I went home to Michigan at Christmas!! EEEK), and the ease of walking down the street to a supermarket. I don’t need a car to get around, and I LOVE that. Almost every day is a beach day, and I LOVE that too. People here are friendly, and warm, and I’ve met some of the most inspiring people I could imagine.

But every time I leave here, I also breathe a sigh of relief. Because there’s a lot I DON’T love about this city, and that I wish I would have known before moving to Rio de Janeiro.

I’m sure you think I’m crazy, and ungrateful, to live in such a dreamy city and have anything negative to say. Please don’t get me wrong – I am extremely thankful to be here. But every city has its downside, even Rio de Janeiro. It’s not all sunshine and beaches.

From the Insignificant to the Most Important

No one has change in Rio de Janeiro.

Especially in grocery stores. Even large ones.

Only once have I gone to a supermarket in Rio de Janeiro where the clerk actually has proper change.

I’m still waiting for the definitive answer on this, but what I’ve been told is that cashiers are not allowed to have much change in their drawers, for fear of stealing (both by the clerk and by a robber). So, in order to get change, a clerk needs to ask for change from the supervisor or the change desk.

So I’ve switched to a credit card… except for when I forget.

The restaurant food in Rio de Janeiro isn’t for me.

I’m a vegetarian (currently vegan). And I don’t like almost anything about the food the restaurants serve in Rio. There’s a lot of meat, cheese, everything fried and breaded and salty and practically impossible to find a good salad. If you hate healthy food, avoid fresh greens, LOVE pizza and fries, and/or are a true carnivore (in other words, you’re just like my brother), you will LOVE Rio.

There’s rarely a decent vegetarian option, and when I ask to hold off the meat from a main dish, there’s always a mass of confusion and usually a mistake. Which I understand – I’m the strange one here, not them.

I tend to avoid Brazilian restaurants altogether (other than “by-kilo” restaurants, blessed be their existence) aside from Arabic restaurants. I used to have a few Mexican favorites but have given up as they’re quite hit or miss (running out of beans doesn’t mean you should substitute carrot.. and twice I’ve been told that they’ve run out of vegetables. As in, every vegetable other than lettuce. What?!)

They’re also generally terribly overpriced for what you actually get.

(I need to point out though, this is just restaurant food. Grocery stores and markets have great veggies and amazing fruits.. sometimes I just crave eating out!) 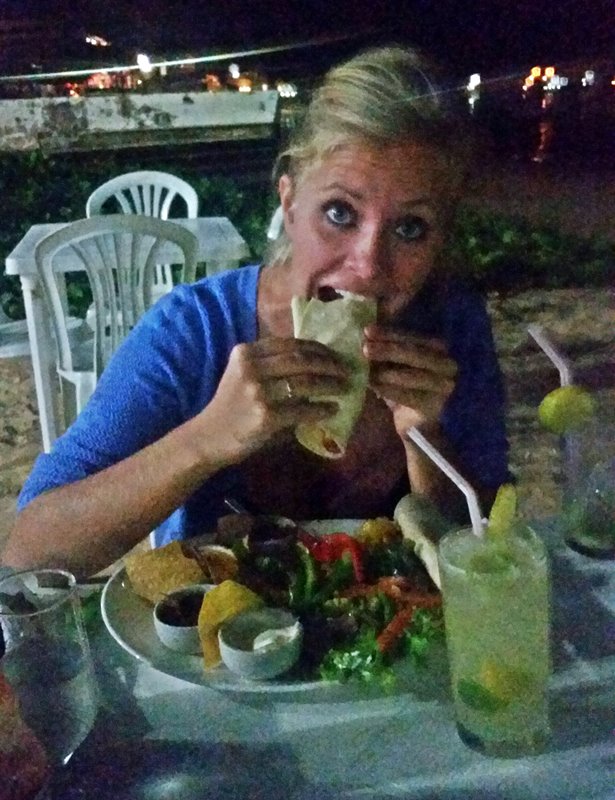 the vegetarianly altered fajitas that later made me sick

The crowds are also noticeable when trying to walk down the street. Opposite of in the US, when you stay on the right side of the sidewalk and walk in pairs or singly, groups of Brazilians will walk across the whole sidewalk, forcing someone coming in the oncoming direction to wait for them to pass or get pushed onto the street.

during Carnaval, crowds are fun! Other times, not so much

An apartment that would cost be less than $500 equivalent in Bangkok is $1500 in Rio de Janeiro. The buses are twice as expensive as in Bangkok, and the metro is as well.

Movie ticket prices are on par with the US, as is dining out and most travel expenses (like hotels and rental cars).

While the prices match the US or are even higher, the quality and the service that you receive is much worse.. which feels disappointing. It’s harder to save money here, and you need to be really on top of your budget because the “little” expenses in Rio actually aren’t so little. In reality, the cost of living in Rio de Janeiro is way higher than I ever could have imagined, and much higher than the cost of living in Bangkok. 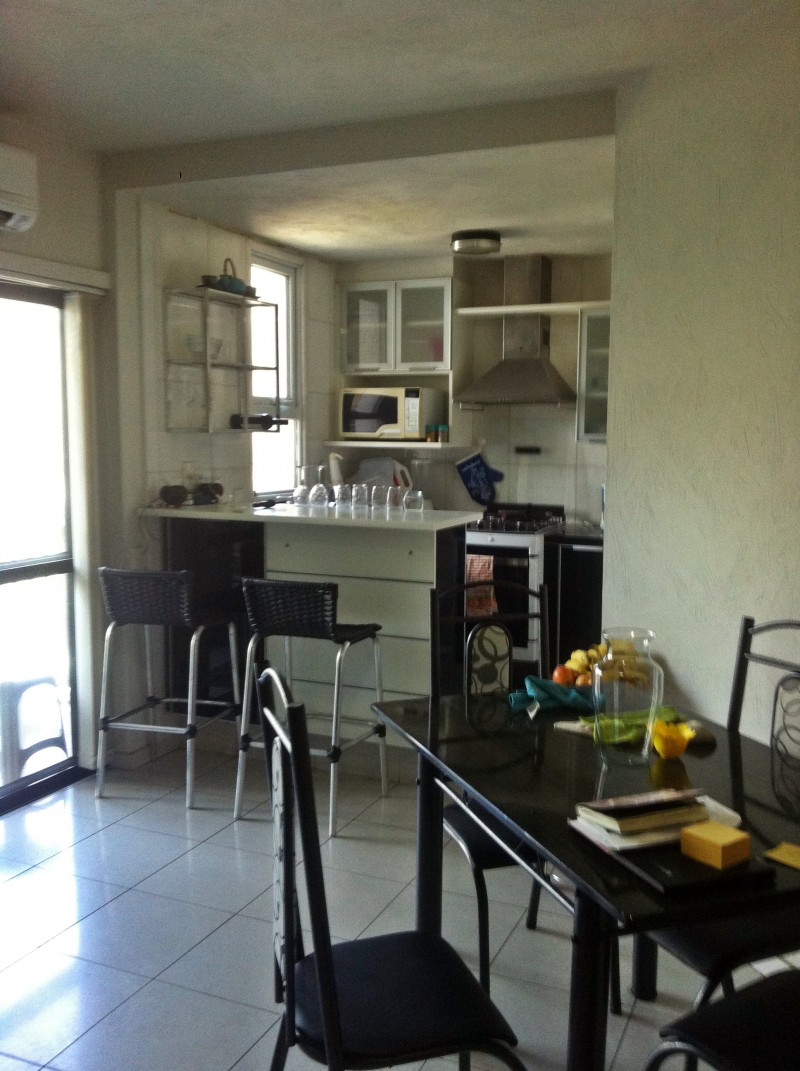 3x as expensive as Bangkok

The bureaucracy is unreal.

Filling out what should be a simple form is like trying to complete a crossword puzzle scavenger hunt written in Chinese. And a 100 step Rube Goldberg contraption is more efficient than the process for foreign registration.

A trip to the Federal Police is more painful than a root canal and wayyyy less productive. It’s necessary to extend a visa, and to register a working visa (both of which I’ve had to suffer through). Always, it will take at least a half day to complete and you’d better speak Portuguese or bring a Portuguese-speaking friend, because even in the foreigners office, no one speaks English.

Also, there are never clear English directions for any procedure, and there are always further requirements than listed (how you are supposed to figure this out? I guess through hearsay and blogs like mine!)

Disrespect towards women is rampant.

I have never been catcalled like in Rio. Obscene, pervasive, and inescapable, on a tired day sometimes I don’t even want to leave my house.

I’m blonde and foreign, and lived in Thailand previously, so I am used to and understanding of curiosity and staring.

But having sucking and other obscene noises made at me, rude gestures, explicit comments, and being physically touched… it all gets taken to a whole new level on a literally daily basis in Rio. I thought I had thick skin, but I was wrong. It’s exhausting and I’m sick of it.

The only thing that helps is being with a man – then the people on the street cut it out and its only guys on the buses that pass by, which isn’t so bad. 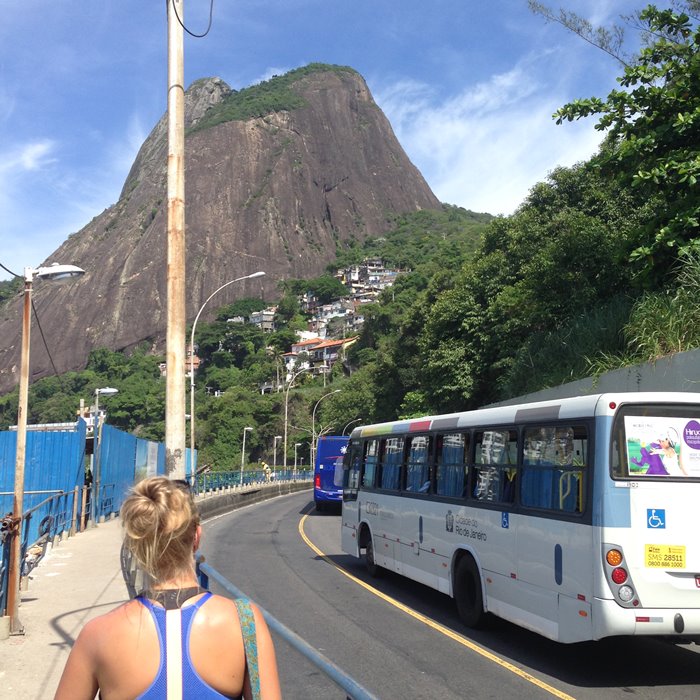 Sometimes, it is downright dangerous.

In Rio, I never wear any jewelry that could be mistaken for expensive, as it makes you a target for theft, which is very common even in the safe areas of Zona Sul where I live. My area is supposed to be very safe (Leme/Copacabana), but recently a friend saw a homeless man get stabbed outside my metro station, in full view of police who did nothing.

Violent and sexual crime is not uncommon in Rio. A friend who lived one metro stop away in an equally “safe” neighborhood used to watch people get robbed every day from outside her window.

This is daily life, and it is part of my “norm”.

What Else to Do in Rio de Janeiro
Check out my full guide to Rio de Janeiro here, which includes the best suggestions for hiking (including my favorite Morro do Leme hike), where to eat, weekend getaways from the city (including Buzios), and the best beaches.
You can read every article I’ve ever written about Rio de Janeiro (and there’s a lot: I lived there for almost two years!) here.
Viator offers a bunch of different Rio de Janeiro tour options, including for visiting Christ the Redeemer, and provides excellent customer service and refunds if anything goes wrong — much more than local operators would do.
Where to Stay in Rio de Janeiro
If you have around $100 per night to spend, you can’t get a better value than Rio 180 hotel — each room is a suite and has its own private hot tub along with incredible views!
For a wider range of pricing options, check here  or Airbnb is a great value in Rio de Janeiro. You can use this link for 39USD off your first stay!
How to Arrive to Rio de Janeiro
You can take the bus into Rio de Janeiro from many destinations within Brazil, but most people choose to fly. While Copa Airlines isn’t my favorite carrier, they do usually offer the cheapest flights. To check the latest low prices on airfare to Brazil, try Skyscanner , or if you have some date and/or destination flexibility and want to score the absolute lowest prices, try Kiwi.com.

What do you wish you’d known about Rio?