I went to Israel for my first time immediately following a trip to Italy. I’ll be the first to admit: Italy set the bar incredibly high in terms of cuisine. Italian food was delicious, fresh, and cheap. I expected Israeli food to be a bit of a let-down after 4 days gorging on real Italian pizza, pasta, and gelato.

But while I had never really heard about Israeli food before, I need to be honest: the food from Israel topped Italy in a huge way.

Like Italian, Israeli food is delicious, fresh, and (relatively) cheap.

The hummus! The falafal! ISRAELI BREAKFAST!

Israeli food is all about high quality, fresh ingredients, with an emphasis on vegetables and customization.

Aside  from the crazy deliciousness, here are the other things that most surprised me about Israeli food:

imaginary deliciousness? not quite…

“What is Israeli food?”

When I asked Israelis this, they kinda smiled.

Most said some form of, “There’s no such thing as Israeli food”.

Because, like American, typical Israeli food is a mix of many different cuisines that have been combined and made unique. This especially includes Arabic – with Israelis also having hummus, salad, kabobs, and falafel.

Israelis customized falafel from the typical Arabic dish to be more of a meal in itself. Israeli falafel doesn’t mean just chickpeas balls, but rather a chickpea ball sandwich. It consists of falafel balls stuffed inside a big soft pita along with veggies and dressings and spices. The tahini used for dressings has Arabic roots but is distinctly Israeli in usage.

There’s just something particularly charming and fun and downright satisfying and luxurious about having a bunch of small plates and little dishes of various sauce and dips. Why give settle for a pat of butter when you could have butter in a dish AND a bit of labneh AND a bit of cheese AND a bit of tahini AND some kind of tomato sauce, with eggs and salad and bread. (and this is all for one person)

I don’t know why, but it’s just become my absolute favorite way to eat, and Israel nails it.

If you’re ordering Israeli-style at a hummus place, for a group of people, you’ll experience a similar situation, but the dishes will be bigger, and consist of things like a few different varieties of hummus, different pickled vegetables, and tons of pita.

3. The presentation is show-stopping. In Israel, meals are events.

Lots of options, lots of dips/spreads/seasonings so each eater can customize his or her meal… even at “normal” weekday meals.

The average Israeli dinner puts American Thanksgiving (especially in terms of deliciousness, presentation, and number of dishes) to shame.

Dinner was usually a meat dish, a vegetable dish, a salad, a bunch of veggies, a bunch of pickles, sauces, dressings… the list goes on but all beautifully put together.

4. Breakfast has a surprise twist. One of the most surprising things about eating in Israel was what we had at breakfast.

As an American, this was weird to me (I grew up with high-carb, sweet breakfasts: pancakes, waffles, oatmeal, cereal).

As a vegetable-adoring vegetarian, as soon as I got over the weirdness of having green salad at breakfast, I LOVED it.

It’s one of the travel takeaways that I’ve incorporated into my own life. Starting the day with greens instead of heavy carbs makes me feel so much better!

Breakfast usually consisted of eggs, salad, rice crisps (if you visit during Passover like I have this will mean no bread) or bread, a bunch of spreads, cheese, pate for the non-vegetarians, olives…

5. The wine is world-class.

First and foremost: yes, I consider wine a food group.

I had never heard of Israel as a prime wine destination. But it is! The northern Golan region produces some world-class grapes, resulting in super tasty wine. A $17 bottle ranks similarly to $150 wine from other regions.

More and more wine connoisseurs are discovering boutique Israeli wine, but it still hasn’t caught on as well as it should around the world.

Meaning that when you’re there – you’ve got to take advantage and try Israeli wine first hand.

Most wineries are open to tours, and happy to discuss the land, the culture, and the awesome wine the region produces. visiting a vineyard and farm in Golan Heights, Israel

Also noteworthy is the growing trend to go sulfite-free and all natural at many of the Golan wineries.

6. The snacks are strangely addicting. no makeup but I’m happy to be eating BAMBA!

The Israeli snacks are in a league of their own. And so different from American snacks that I don’t even have the right adjectives or comparisons to describe their awesomeness. But I’ll try. Or you can watch this hilarious video of Americans trying the Israeli snacks here on Buzzfeed.

Bisli (rhymes with Ron WEASLEY) is fun to say and fun to eat. It’s the best junk food snack I’ve ever had in my life, no competition. Described as a “wheat party snack”, it reminds me of stiff rotini with barbecue seasoning, and it’s an absolute must every time I’m in Israel.

You also can’t forget Bamba, which is sort of like a peanut butter flavored cheese puff (minus the cheese!).

According to Israelis, the reason that way fewer Israeli kids have peanut allergies (especially compared to the epidemic in America), is that most Israeli babies’ first solid food is Bamba. The research supports it. In the US, any pita I’d had was in the form of a “healthy” pita “pocket” for making sandwiches with. It was always dry, kinda crumbly, and not delicious at all.

Based on the pita I’d had in the US (and elsewhere in the world), it would never be my bread of choice.

And then I went to Israel and realized that whatever is being sold in those plastic baggies in the US is not pita, it’s cardboard marketed as health food.

Israeli pita is like a chewy, warm cloud. It’s the stuff dreams are made of.

While pita is definitely the star of the glutenous show in Israel, ALL of the bread is pretty damn delicious, so don’t miss it.

8. The salads are on point. salad with my eggs

In Israel, salad is special. One, it’s eaten with pretty much every meal (but it’s never considered a complete meal in itself, especially according to my husband). Two, there are almost endless varieties of salad.

After eating Israeli salad (and having an Israeli husband on-call in my kitchen), I’ve become particularly fond of small-chopped salads. Big wedge salads and large chunks of vegetables now just seem lazy, and I’ve come to understand the particular joy and deliciousness of a finely chopped salad.

The salads in Israel tend to be mostly veggies (sometimes they don’t even have lettuce), with light, homemade dressings (no ranch).

Pin it for Later: 8 Biggest Surprises about Israeli Cuisine 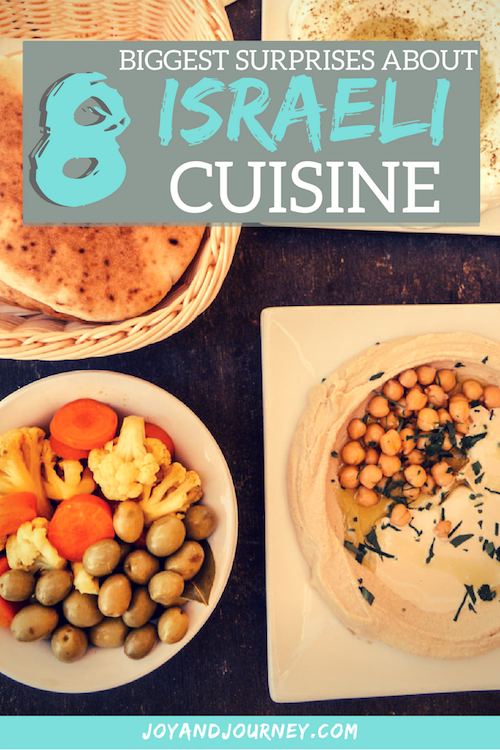 Have you ever been surprised by a country’s cuisine?