I took a four day dream trip to Rome with my boyfriend (now fiance!) last month. The dream quickly turned into an AirBnB nightmare. 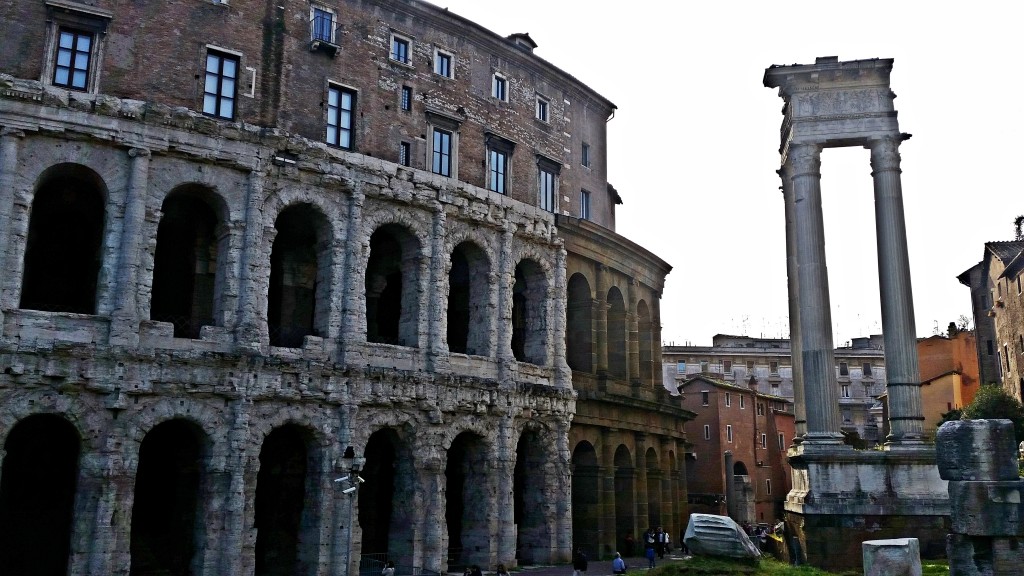 Rome, exactly how I imagined it

Almost everything went off without a hitch – even the weather was incredible.

It would have LITERALLY been the most perfect vacation imaginable (I mean, I got engaged! Yay!).

If it wasn’t for my Airbnb nightmare. 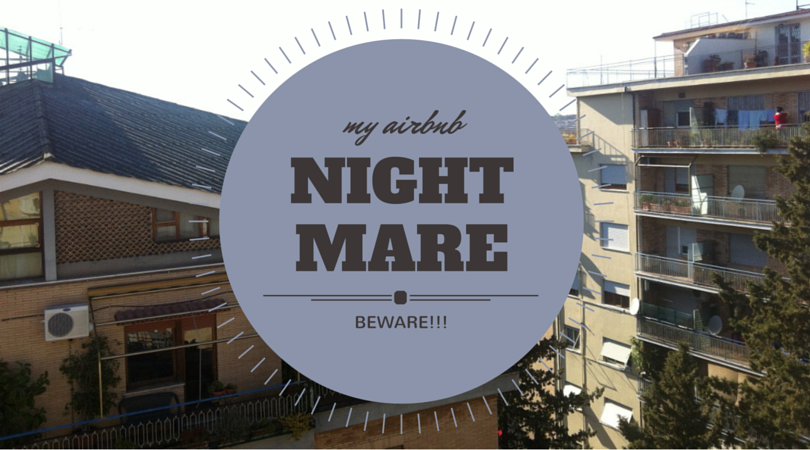 Over the course of 4 days, I had to interact with the most awful, dishonest, and irrational person I have ever come across in all of my years of traveling… who also happened to be my nightmare Airbnb host.

While the host had excellent reviews and spoke English, and hosted a very conveniently-located and ridiculously well-priced loft, with all of the needed amenities and tons of space… the trip quickly turned from a dream into nightmare.

The host couldn’t meet us, so he had elderly relatives living in the building to check us in. Which would be fine, except the keys we were given wouldn’t open the apartment. After much hand-gesturing (the relatives didn’t speak English) and door-wiggling, we got inside. Instead of complaining about the keys, we were jetlagged and starving, and set out to find some food.

When we returned home that evening, the keys wouldn’t work. Again. And the relatives downstairs didn’t answer. Living in Brazil, we didn’t have a European cell phone to call the host. We were locked out for over an hour before the door finally, MAGICALLY opened. Once inside, I told the host about the key problem, which he confirmed had happened to other guests as well, and that it just takes a bit of jiggling but eventually the door will open.

While that wasn’t a super helpful answer (and something I wouldn’t say to my own guests when I was a host in Bangkok), it had to do. We were there during Easter weekend, every other hotel was booked, and I had a jampacked tour schedule lined up for us. Resigned to our annoying key situation, we went to bed.

The next morning, after sleeping in, we finally had a good look at the apartment. And WOW. Covering every wall of the apartment was extremely violent and misogynist paintings and photographs. Images far too disturbing, disgusting, and graphic to publicly display, but including: a painting of a woman with her throat cut and bleeding out, paintings of vaginas with swords through them, a drawing of a woman’s face as she appears to be raped, slogans such as “your girlfriend is a bitch” and “high men love pussy”.. among many, many more.

I was terrified of who I was dealing with – and shocked that AirBnB would approve this listing (a professional AirBnB photographer had taken the apartment photos which did not show the content of the wall hangings). According to AirBnB policy, you have 24 hours to report a problem. We’d already passed that window. 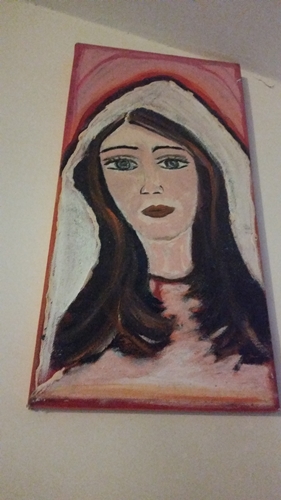 There wasn’t time to waste overthinking this sick apartment, as we had reserved a tour of the Vatican and had to go. The whole day, I couldn’t get the creepy images out of my head. What is up with that place?

Upon reaching the Airbnb again in the evening, AGAIN we were locked out. AGAIN we tried the neighbors downstairs, and nothing. I got a faint signal of wifi from outside the door, and used it to Airbnb message the host. Nothing.

Then, again, after over an hour of trying, miraculously (or creepily?) the door suddenly sprung open. Once inside, I messaged the host again, to let him know that this isn’t acceptable and we’ll be needing a working key set. Shortly after, the elderly relative from downstairs came to the door. We attempted to explain to him the situation, what happens with the keys, but the guy doesn’t speak a word of English. We went to bed.

A few hours later, an angry, violent pounding on the door started. I was scared, and we didn’t answer, as we definitely weren’t expecting anyone in the middle of the night. Creeped out by the whole situation, I held my breath in bed, and after it stopped, finally fell into a nightmared sleep.

When I woke up the next morning, I had a tirade of rude and strange Airbnb messages from the host, who claimed he had sent his assistant to help us and we didn’t want to be helped. He would send for another set of keys to be left under the door. HOORAY!

Those keys actually worked. But from then on, the host was insanely rude, accused me of “breaking balls” (as in, being a girl who is tough on testicles?), sending long and nonsensible messages insulting me. Because of his sexist messages, and the violent, misogynistic images on the wall, I spent the rest of the trip (in which my now-fiance later proposed) a nervous wreck.

Before checkout, the host demanded extra payment. calling it a tourist tax, but doubling the usual amount. He said that if I did not pay, he would file a false claim that I had stolen artwork and made damages. Sick of dealing with him, I gave in. He said all of this on Airbnb message, which can be tracked.

The host declined to meet us before checkout, as we had an early flight. So, I left his keys and the payment on the table.

After checkout, the host claimed I stole a window curtain from him (!?), and that my check-in and check-out times were inappropriate (even though they’d been approved by him). After seeing my NEGATIVE review of his Airbnb apartment, he then also claimed that I caused damage to the apartment and that I stole as well, and that he would file a legal claim against me.

His is my only negative review, I’ve been a guest and a host many times and have nothing but positive comments. AirBnB declined to remove it – even though much can be proven false via his long, convoluted messages – and tried to comfort me by saying that most people wouldn’t understand it.

The host made extremely rude and sexist comments

The host sent “assistants” to harass us late at night

The host claimed that I stole a curtain (!!!) and that he would report me to the police

The host lied about the time of check in, check out, and the condition of the apartment

I made many mistakes with this Airbnb, which I will admit:

1. I should have inspected the apartment carefully upon arrival. Including taking pictures.

2. I should have refused to pay the “tourist tax”.

3. I should have informed Airbnb at the first sign of a problem.

4. I should have taken photos upon checkout, to prove the condition of the apartment.

After contacting AirBnB about my experience with this host, they were less than supportive. They did give me a 100USD voucher for a future stay on AirBnB.

My biggest issue with AirBnB is that they did not have any excuse for why this listing was approved (and continues to be available), or any answer for what protocol that they take to insure that their experience is safe for guests, especially solo women.

Instead, they only insisted that “Airbnb is a third-party company”, and that it is “your word against your host’s words” even though I flagged inappropriate and threatening messages from the host, and sent 13 photos of the “art” in the apartment depicting violence and rape of women.

You are paying AirBnB for a service – and that service is to connect hosts and guests and protect the privacy and payment of each. You are not paying them to protect your safety, and are equally as personally safe (or unsafe) had you chosen a room/condo off of Craigslist.

You are not paying to be protected from Airbnb extortion, you do not have the right to a fair and honest review, and the customer service is hurried and mildly polite (though grammatically incorrect) at best.

Whether you choose to continue using AirBnB or not (it is an awesome, fun, and inexpensive way to travel.. aside from bad Airbnb experiences like mine), I hope you stay mindful of a few lessons I’ve learned and tips I’d suggest, listed below.

Tips to Protect Yourself from on AirBnB and from Bad Hosts

**I contacted AirBnB to ask (again) how they protect guests from dishonest or aggressive hosts, and to question the approval process. I was given the following statement: “I can’t provide you with these informations, but you can take contact with our Press Department”. I’ve contacted the Press Department, and if I hear back, I will update this section accordingly**

***Update 4/22/2015*** Airbnb responded: “I am getting in touch as I would like to reassure you by answering the questions you raised in relation to safety within our community. Should you at any point feel that your listing is unsafe or fear for your safety for any reason, we have a dedicated Trust and Safety team available 24/7 who can assist in these extremely rare situations. I am unable to provide internal information on the measures we take to protect our community but I am attaching a link regarding Personal Safety within our community which I hope you will find helpful: https://www.airbnb.com/support/topic/245.”

***Update 1/31/2017*** While I am still very disappointed in Airbnb’s response to my complaints, I have used Airbnb many times since this very dark episode. Though this awful Roman really messed up our engagement, I am happy to report that we had an AMAZING stay (and an awesome host) in Thailand for our honeymoon. In the future, I’ll only use Airbnb when I travel with my husband or girlfriends – never alone – as I still don’t trust the safety standards.

Pin it for Later: My Airbnb Nightmare in Rome 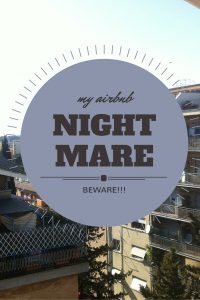 If you’ve only had positive experiences – I’d love to hear those too! Please share below.

If you’ve never tried Airbnb before and you’re brave enough to give it a shot – use this link to get a $32 credit towards your first stay!

To read about my other, very positive experiences in Rome, click here 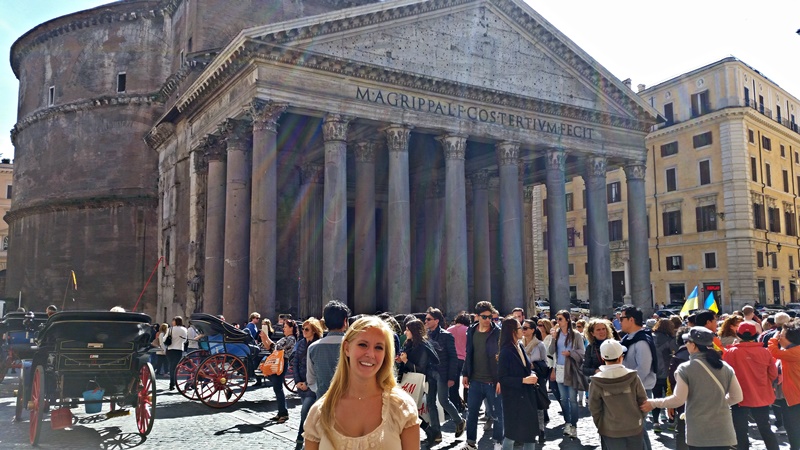