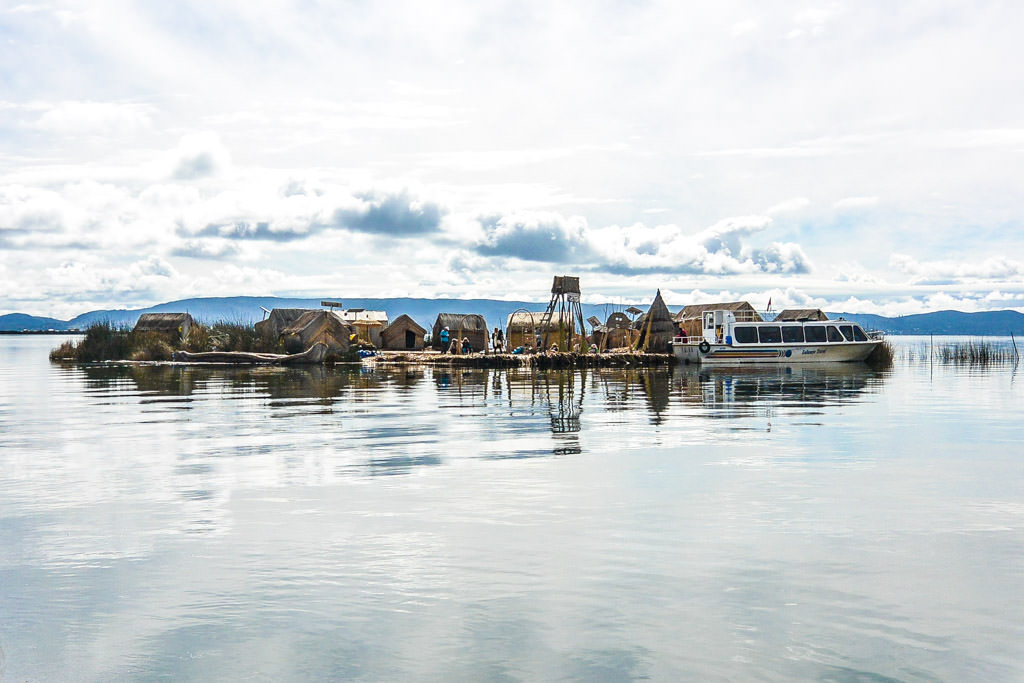 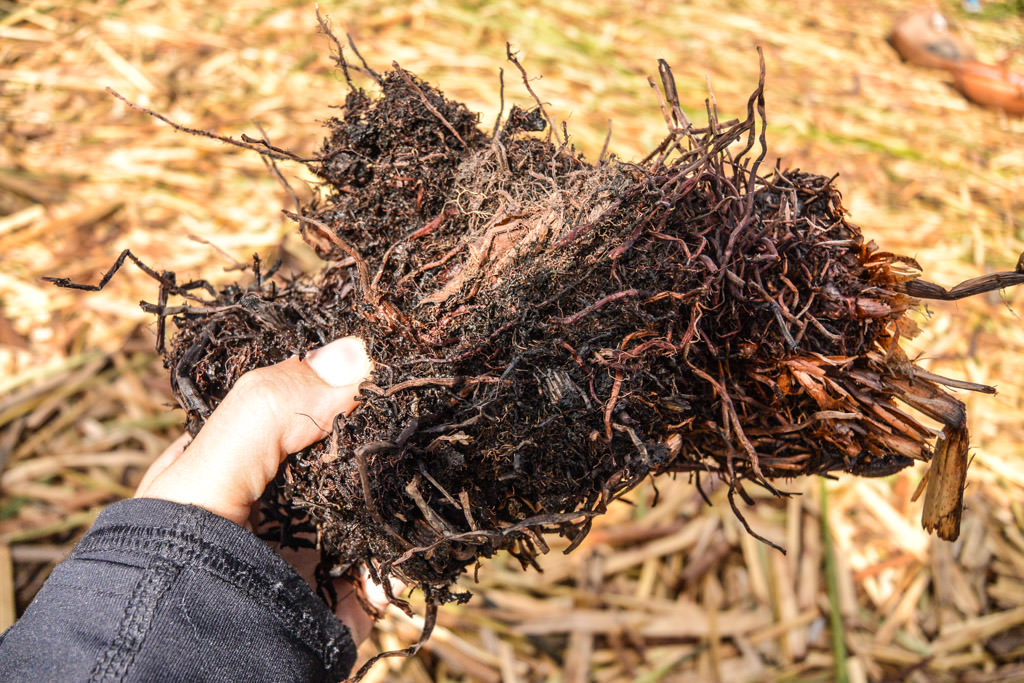 the base reed material

The Uros people had lived around Lake Titicaca for hundreds of years (some say thousands) until the Inca moved in. Some stories claim that the Uros people were pushed into the lake by the Inca (literally), where they used their ingenuity to create floating islands to live on. Others say that as the Incas encroached on Uros land, the people began creating the islands which could be easily moved for defensive purposes.

These days, there are over 50 islands and more than 1000 islanders. Now, Uros people survive by hunting and fishing as they did in the old times, in addition to making money through arranging tours to the islands and selling handicrafts to tourists.

There are rumors that the modern day (supposed) inhabitants of the floating islands do not actually live there, but rather stay on the mainland and simply appear for tourist performances.

It’s quite the debate among tourists in southern Peru (and online), with detractors saying that visiting the islands as a tourist just perpetuates the charade and is not an actual celebration of culture. People get pretty vehement about it.

I don’t like to take anyone’s word on anything and my husband likes to tell me that I’m curious as a cat (not in a complimentary way)… so of course, I had to go see for myself on my Peru Hop stopover in Puno with a Full Day Lake Titicaca Tour. 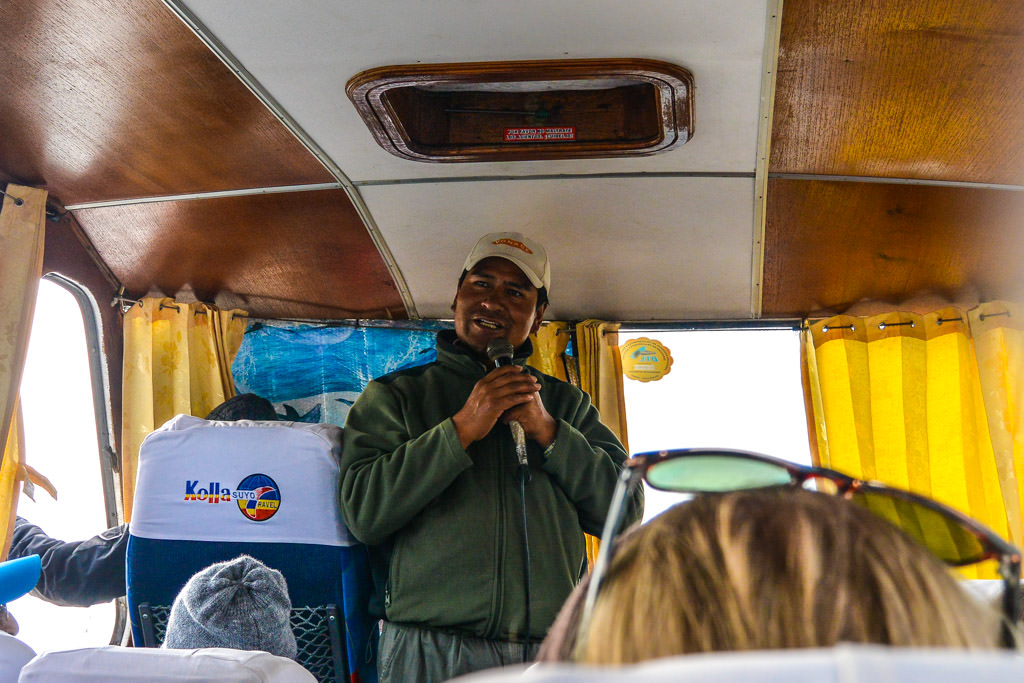 On the way to the island, our guide explained that each of the many islands receives only 1-2 tourist boats a week, and for just a few hours each time, to minimize disturbances to the local way of life and to share the tourism dollars fairly among the community.

He disagreed with the assertion that the islanders don’t actually live on the floating reed islands, especially not spend the night, and was pretty firm in his stance.

If the people on the floating islands really do NOT live there, they’re certainly putting on a pretty elaborate hoax. 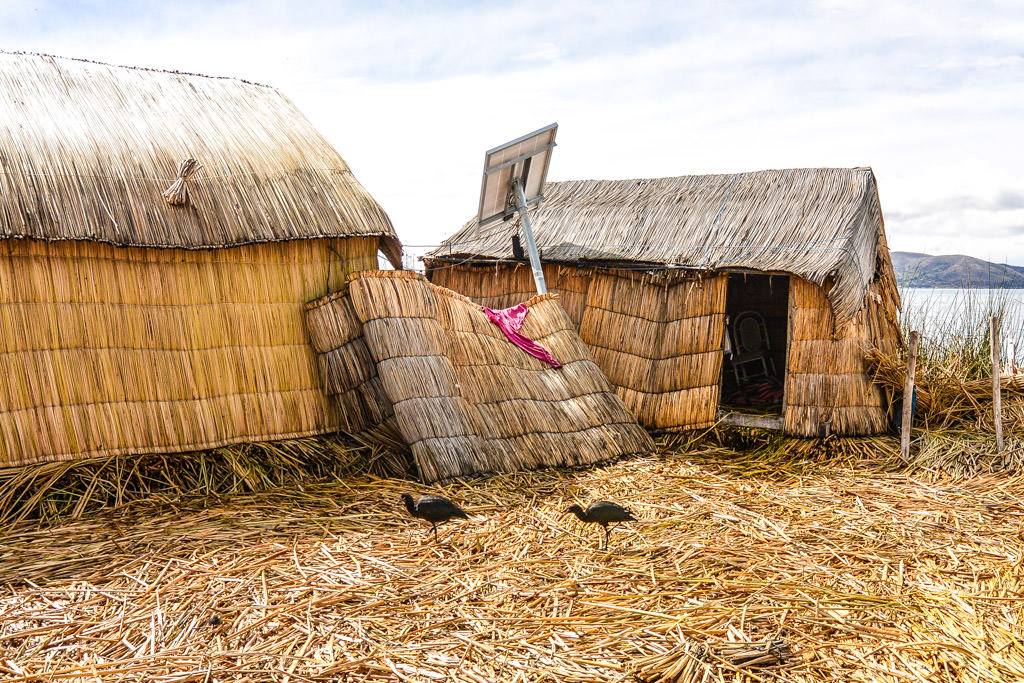 I saw kids getting ready for school, clothes hanging out on the line, and received a thorough explanation of how to use the floating toilet in the middle of the night if the need arises. The islanders also had antennae and solar panels set up to power their TVs. Would that really be necessary if they only arrived to the island a couple times a week to put on a spectacle for tourists?

I’ll admit it is quite a spectacle, and feels like a show, with a big boat full of tourists sitting semi-circle around the island leader. Tourists get a well-rehearsed explanation of how the islands are made (complete with props and signs) and what local life is like. 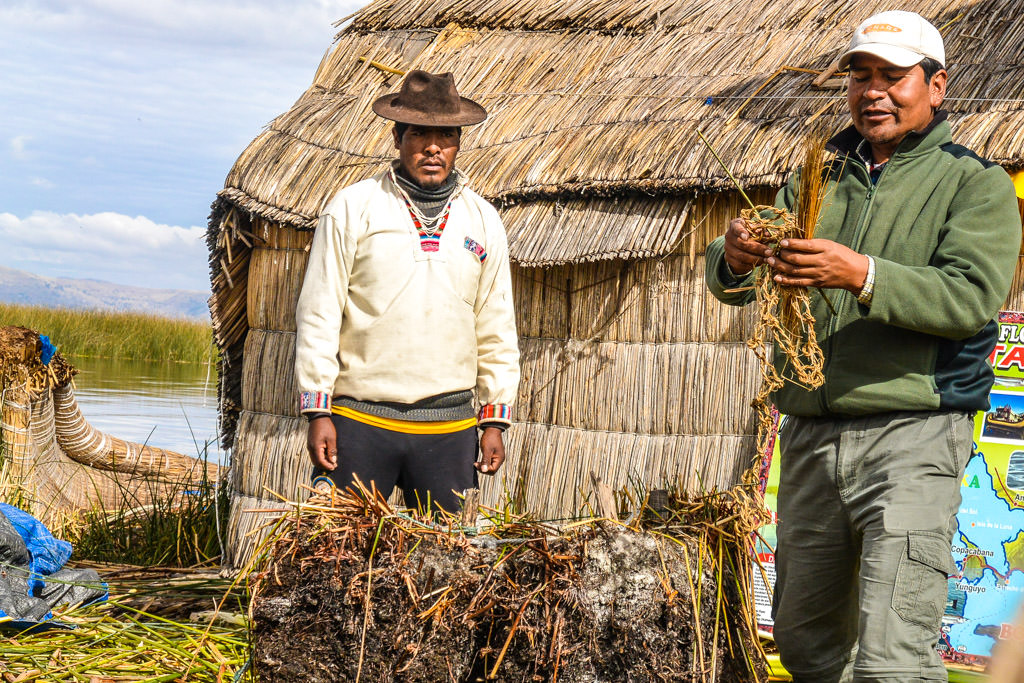 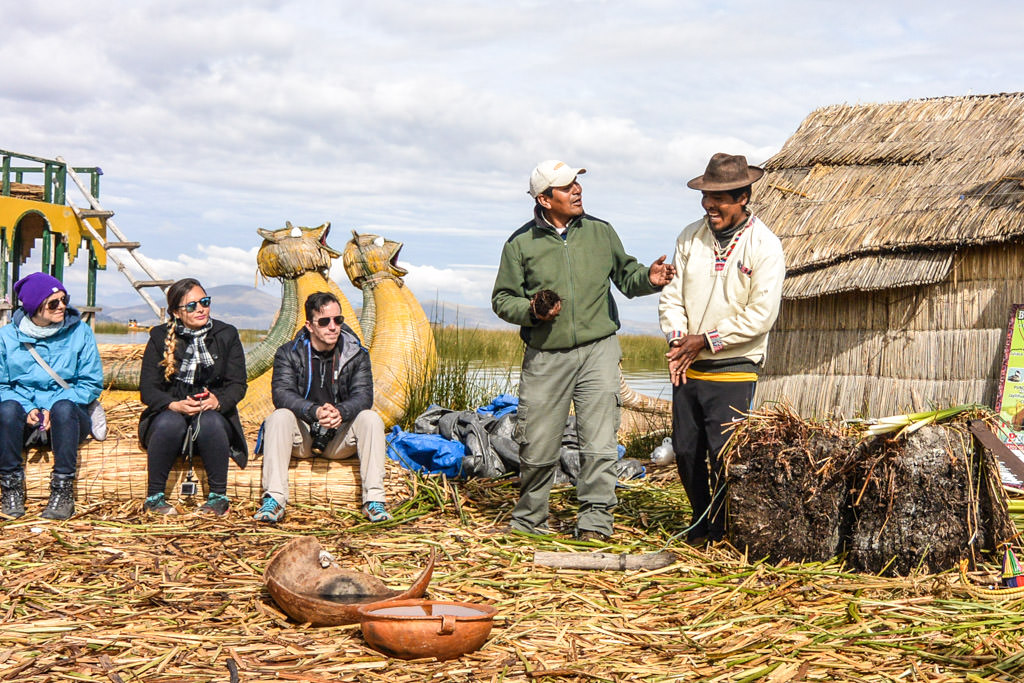 The leader of the island takes everyone on a little reed boat ride around the island (for an additional charge, of course). Also constructed out of totoro reed (like the island itself) and a bit of recycled wood, the boat is the manpowered “Mercedes Benz” of the Pros Islands.

It’s also the perfectly slow paced way to get a feel for life on the water. 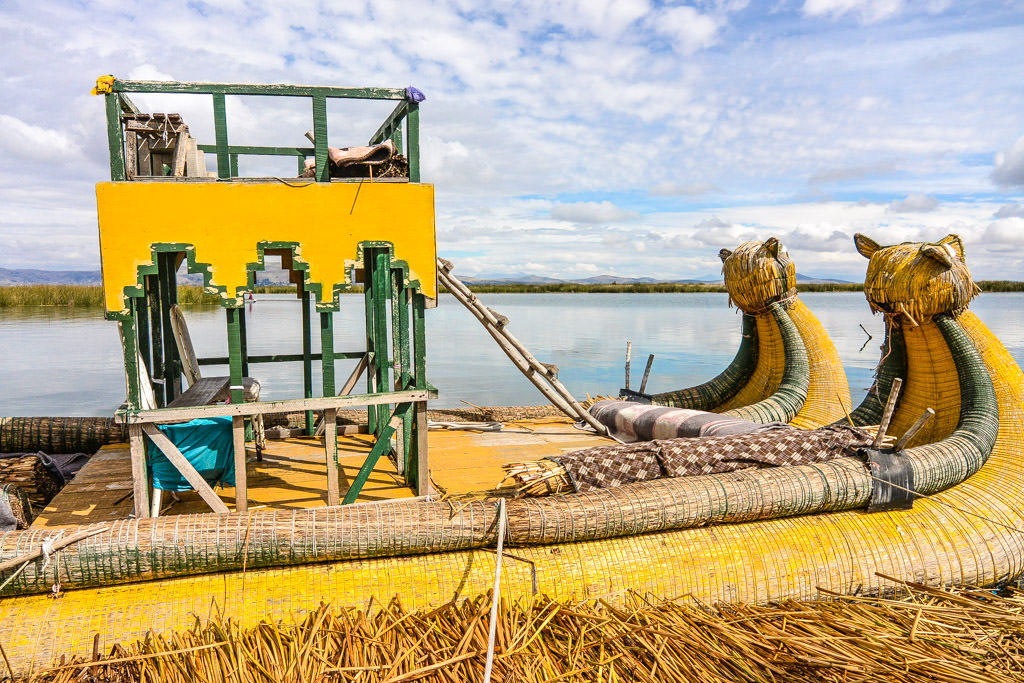 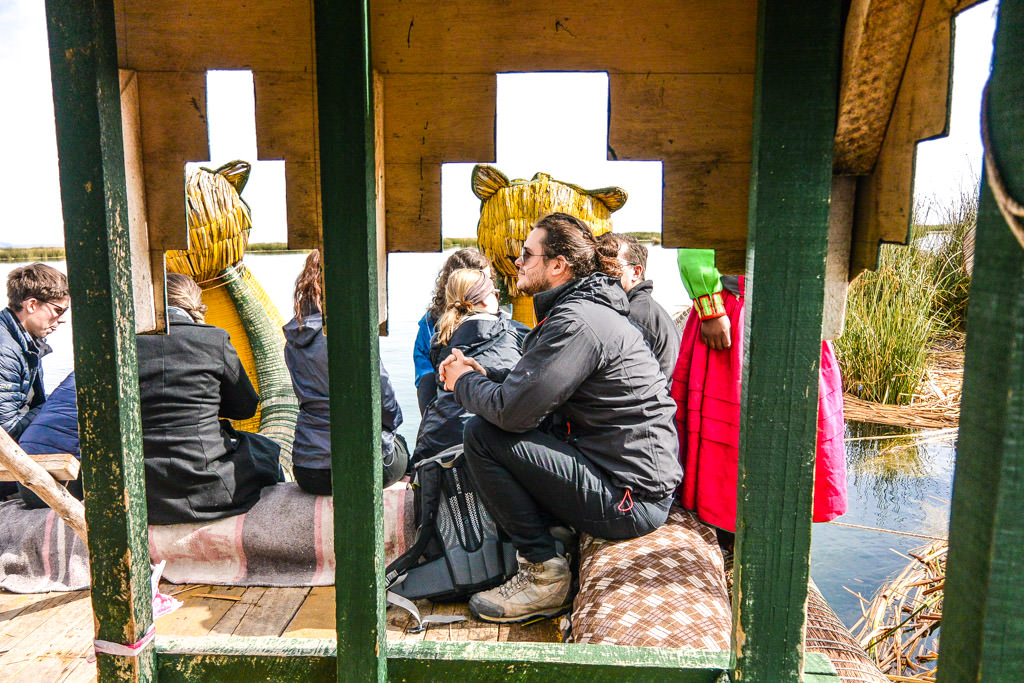 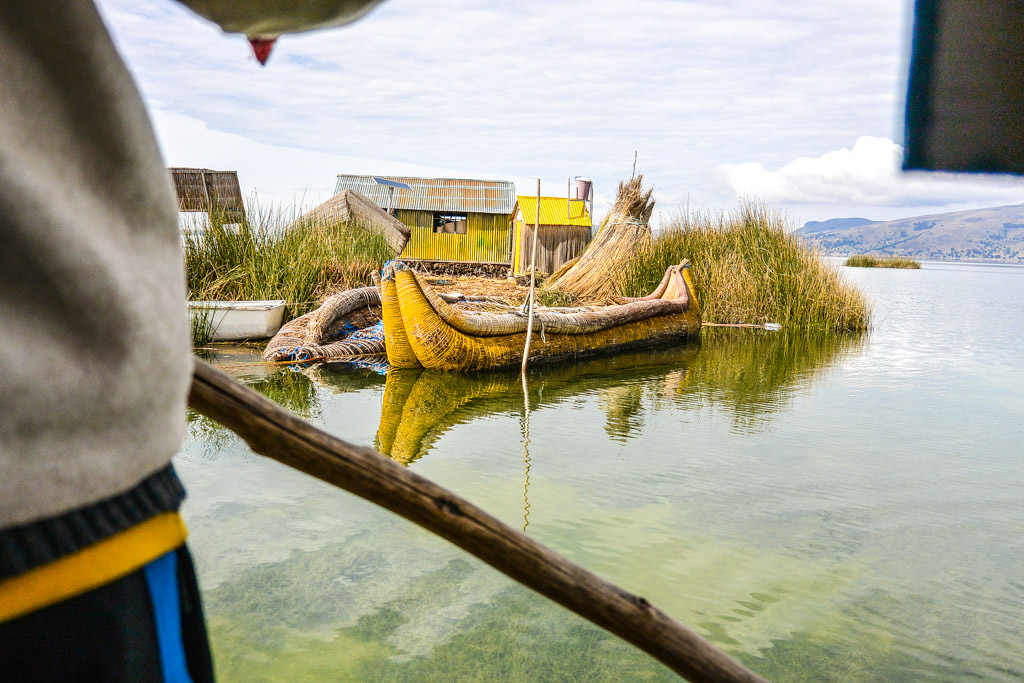 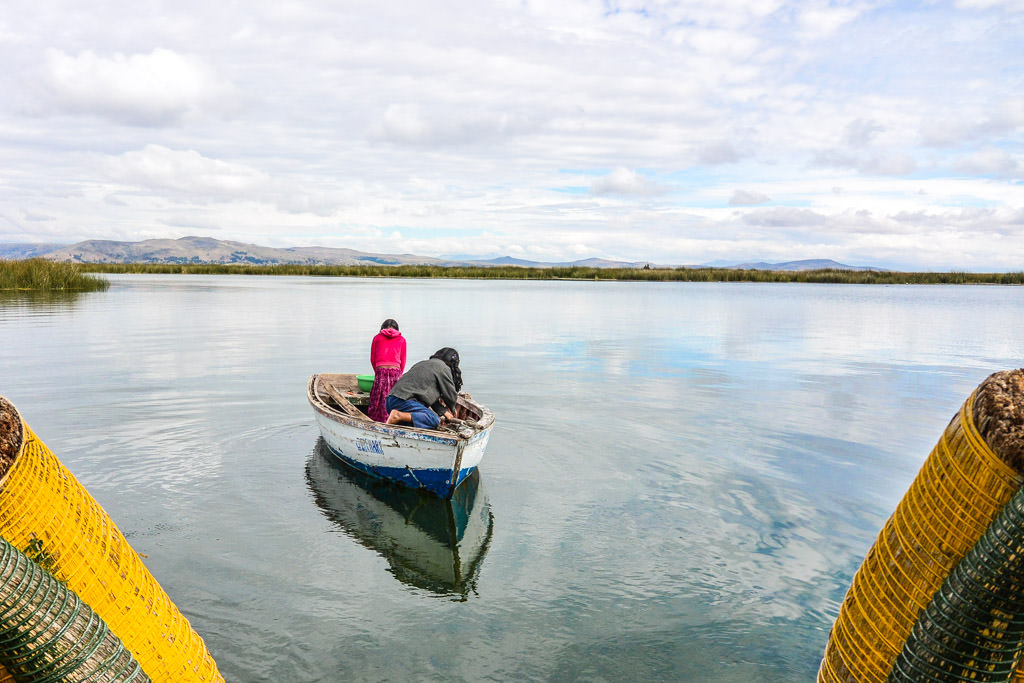 Halfway through, a little boat with two little girls pulls up, and the girls sing a song in each of the languages of the different people on board, and then go up to each person and ask for money.

After returning to the island, the tourists are given free time to buy souvenirs from the women of the island, and to wander around wherever they want. Some people went so far as to enter inside the little homes, sit on the beds, and poke at the belongings. 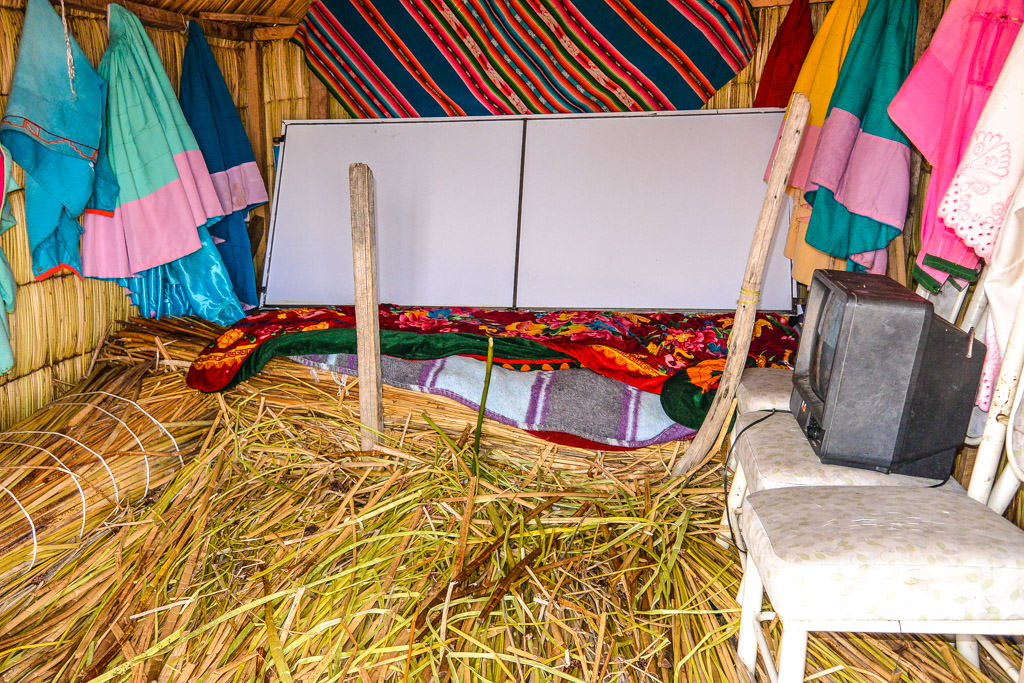 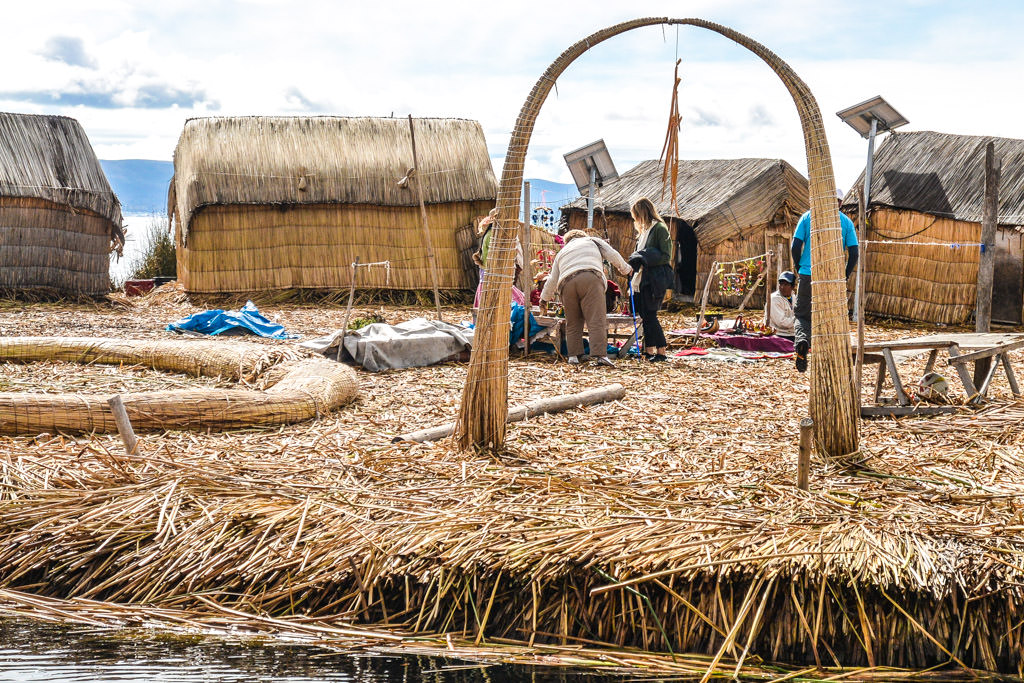 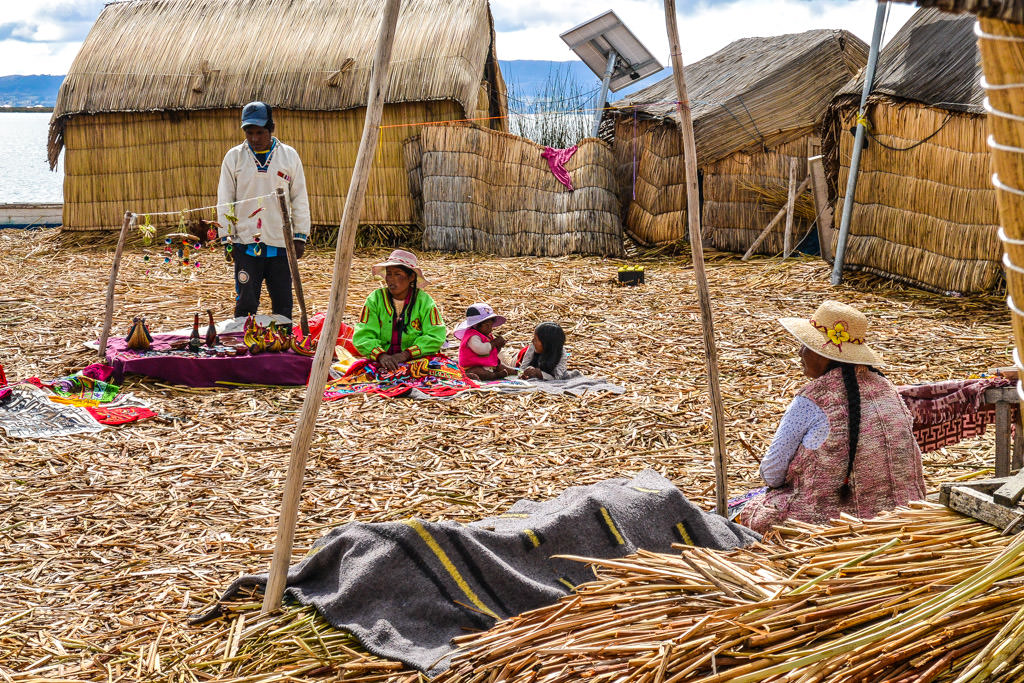 To me, it felt a bit zoo-like, especially having tourists allowed (and encouraged) to invade their privacy, especially of their houses. Also the big emphasis on buying stuff and tipping was a bit uncomfortable. It was much less an authentic local experience between people, and more like a performance or exhibition.

Anyway, the verdict is out and I don’t know whether the people stay on the island at night or not, and I’m not sure if I care. Go see for yourself.

In my opinion, regardless of how much time the people spend on the floating islands these days, it’s still interesting to see how they were constructed and how they lived, even if it was in the past. If these families choose to live on the mainland (for their convenience, safety, education, or any other reason), I can’t fault them for that. 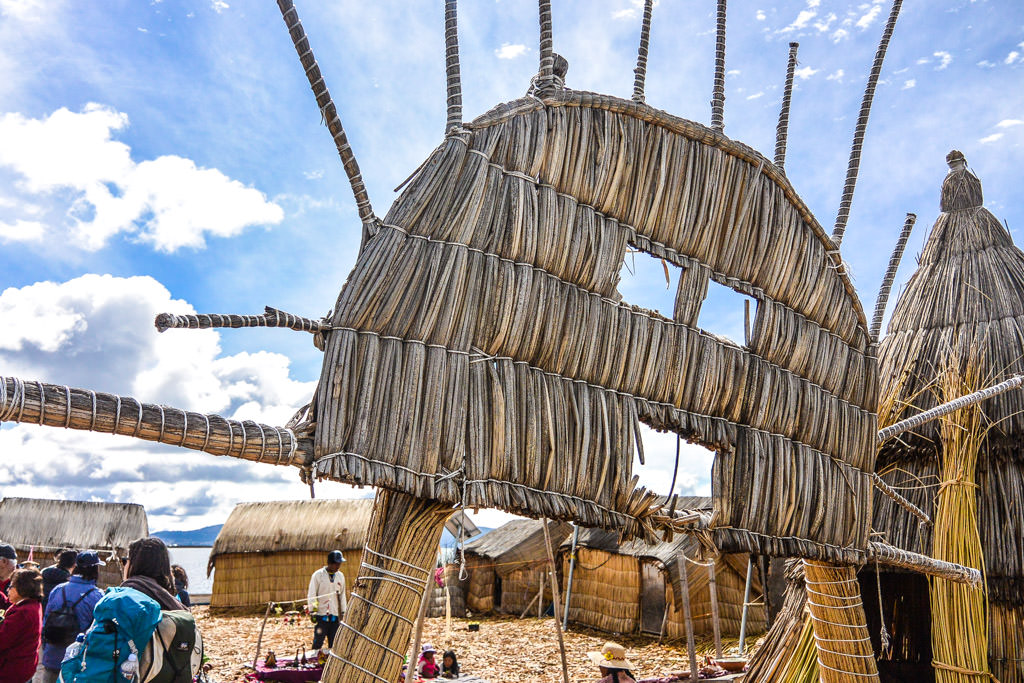 (I have heard that for a more authentic experience, it’s recommended to do an overnight homestay as there are fewer tourists and a more genuine interaction with the local people)

I went on the Full Day “Titicaca Uros Floating Islands & Taquile” trip with Peru Hop and Find Local Trips. The cost was just $25, including lunch. I was picked up from my hotel around 7am, and returned around 5pm (roundtrip transfer to and from the dock included). 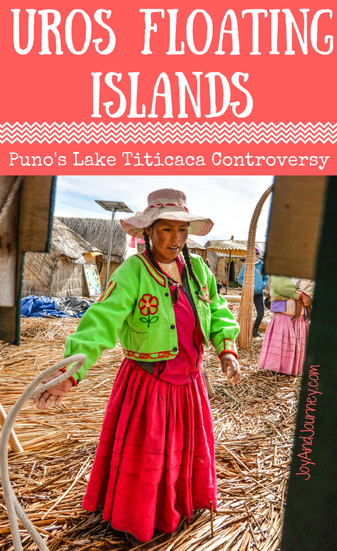 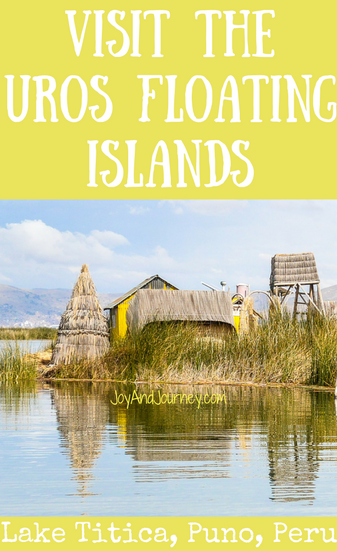 Would you visit the Lake Titicaca Floating Islands? Why or why not?