Major cities in the United States have a nasty reputation for being pretty expensive. While those reputations tend to be well-earned (LA ain’t Bangkok, that’s for sure), one metropolis that doesn’t have to blow your bank account is Chicago on a budget.. This is a damn good news for me, because Chicago’s O’hare is my airport of choice when flying back to the US for my yearly visits.

While I could do a quick “fly in and train the hell out” of Chicago, I’d always rather spend at least a day or two in the Midwest’s biggest city – ESPECIALLY in the summer.

I specifically scheduled my trip for August this year, to fully capitalize on the awesomeness that is the Great Lakes region in its summertime splendor. Unfortunately, hotel prices go up up up along with the temperature, bad news considering accommodation tends to eat up the largest part of my discretionary travel budget. Fortunately, I found an awesome hotel in Lincoln Park for $80 a night (actually, a hostel, but that’s another story)… so to Lincoln Park I went, and 24 hours I spent!

(Just Over) 24 hours in Chicago on a Budget:
Lincoln Park

I arrived to Chicago at 9:30am on the first Amtrak train from Grand Rapids, Michigan (my hometown). First things first: I grabbed a Jimmy John’s Vegetarian Sandwich to go. It’s my ultimate Midwestern guilty pleasure and I’ve got to get my hands on one of their sandwiches at least once every trip.

I checked the prices on Uber while deciding whether to take public transport or treat myself. The fare from Chicago Union Station to Chicago Getaway Hostel was just $11.35, so I sprung for the splurge instead of messing around with trains and buses (give me a break, I had to get up at 4:30am). Seriously, God bless you Uber, you’re the best thing to happen to my travel sanity since discovering cangas and makeup removal wipes. 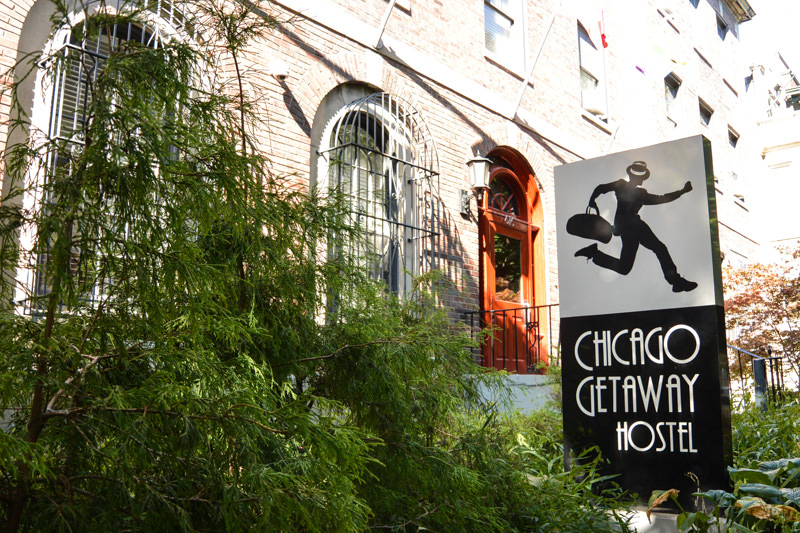 By the time I’d finally Ubered to my hostel, it was about 10am. Unfortunately check-in wasn’t possible until 3pm, so I had a few hours to burn. Lucky for me, the hostel had fast and free wifi, and a chill common area perfect for plotting my next 24 hours in Chicago and getting some work done (one of my clients had just contacted me with an urgent research request).

So, normally I plan the hell out of any trip, ESPECIALLY the short ones, to make the most of my time there. But I was just coming off of a month in Guatemala, and 3 weeks packed with bridal duties at home, so I’ll admit I was a bit burned out organizationally-speaking and had entirely neglected any sort of preparation for my Chicago time.

Luckily, my location in Lincoln Park (and the super helpful front desk guys at Chicago Getaway Hostel) made it super easy to nail down some activities. 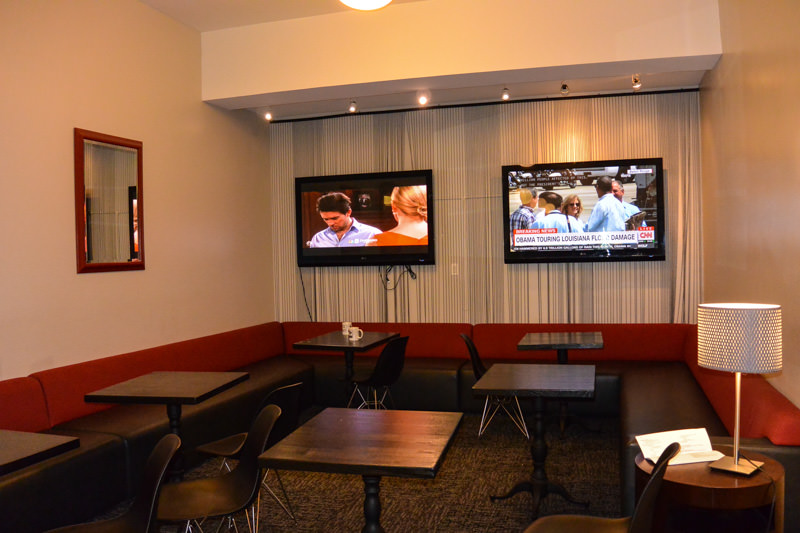 the cool seating area where I waited, and planned

After I checked into my room at 3pm and dropped my bags, I went for a wander in the nearby neighborhood. I found block after cute block of big old houses (what time period are these anyway?) and even a grand church. Even my simple stroll turned into a picturesque ponder, and I took the opportunity to break out my very rusty camera. The three weeks prior spent in my hometown was mainly spent on family, friends, and fun – zero unnecessary work activities allowed, including photography, so it was nice to stretch my creative muscles. 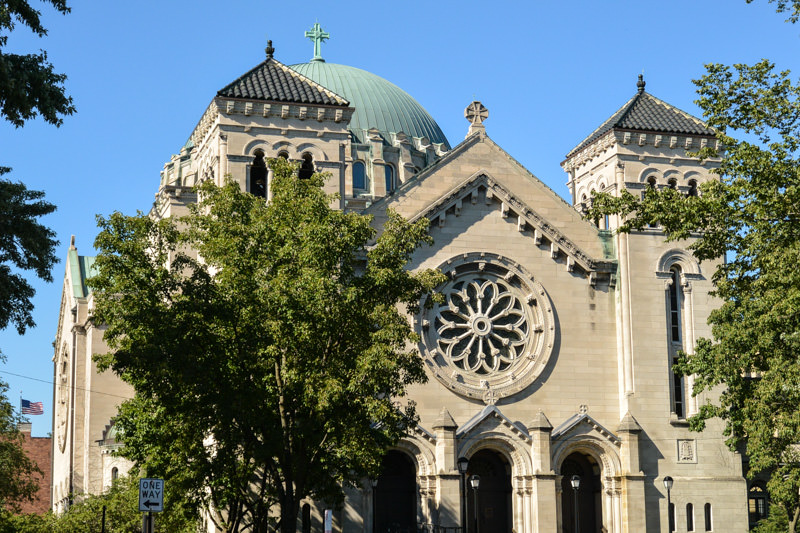 I bought a few splurge items for dinner at Trader Joe’s, indulging in things I’d never be able to find at home in Mexico City. Vegan cheez-y kale chips, $4 wine that won’t make me run to the toilet, pumpkin spice everything? I’ll take it all.

It’s strange to be a tourist in your own home country, but that’s what I felt like. I people-watched, and felt secretly alien and other. Especially when two persistent salesguys for some recipe ingredient delivery service stared at me in utter confusion when I explained that I don’t live in Chicago, nope not even the suburbs, I live in Mexico City so their service won’t work for me, no that’s not in New Mexico it’s the capital city of the country of Mexico, yes I live there even though I’m blonde, you’re right I’m not Mexican, I’m not joking I actually live there but I’m originally from Michigan.

After I was able to break away from their confused questioning, I wandered around the Lincoln Park residential area some more, and tried to imagine myself living there in one of those pretty houses, ordering recipe ingredient delivery (since when is that such a big thing?), working an office job and traveling just 2 weeks a year again. I don’t think I’d like it, but I don’t really know.

As the sky was getting dark, I made my way back to the hostel to sit on the inviting outdoors porch and eat my weirdo Trader Joe’s food with glee. That, I could get used to (and Freshii and Jimmy Johns, of course). I went to bed super early, grandma-style like usual, but this time with the express purpose of making the most out of the 5 hours in Lincoln Park before.

I woke up at 6:30am, packed up, ate a quick hostel breakfast, and checked out (while storing my bag) to head to the Park part of Lincoln Park.

The morning was very quiet but busy, the sidewalk traffic composed of silent but hurried workers making their way into the office while balancing a cup of coffee in one hand and a phone in the other.

When I arrived at the Nature Boardwalk, I was surprised to find it almost entirely empty. In such a big city, how are more people not taking advantage of this space on a beautiful summer’s morning? I won’t lie, I appreciated the solitude, and walked around taking photos of EVERYTHING, relishing the feeling of the camera back in my hands after its 3 week rest. 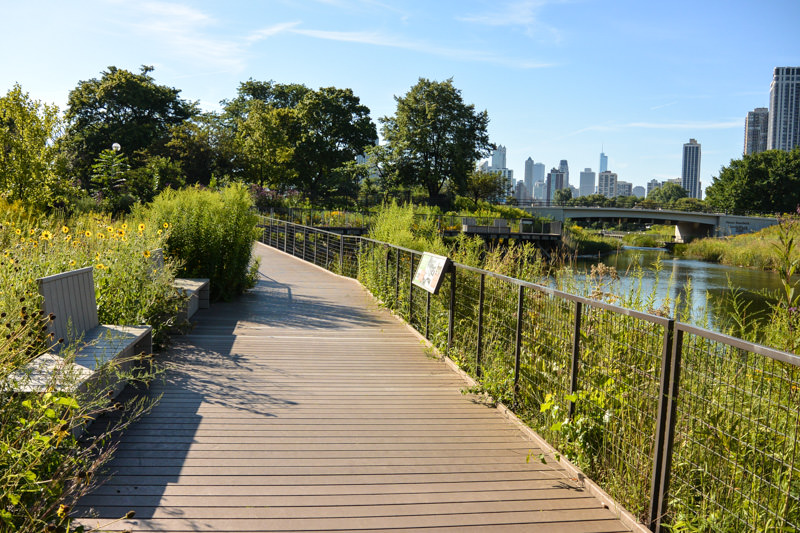 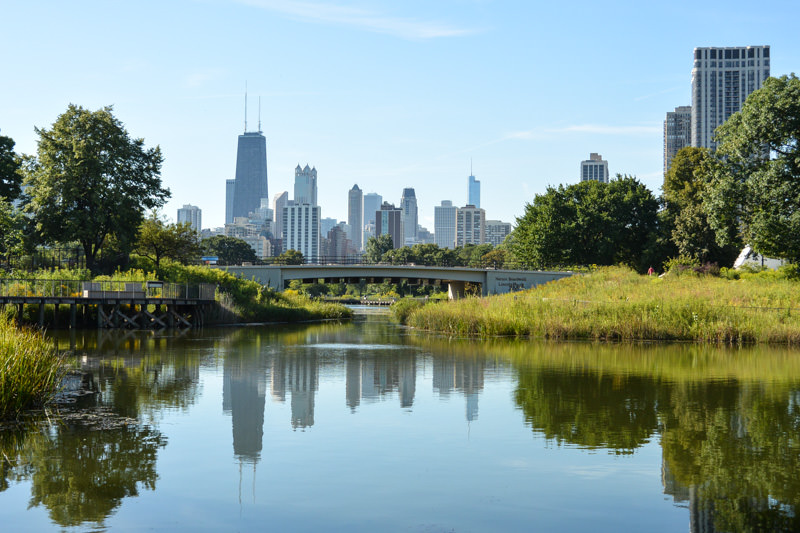 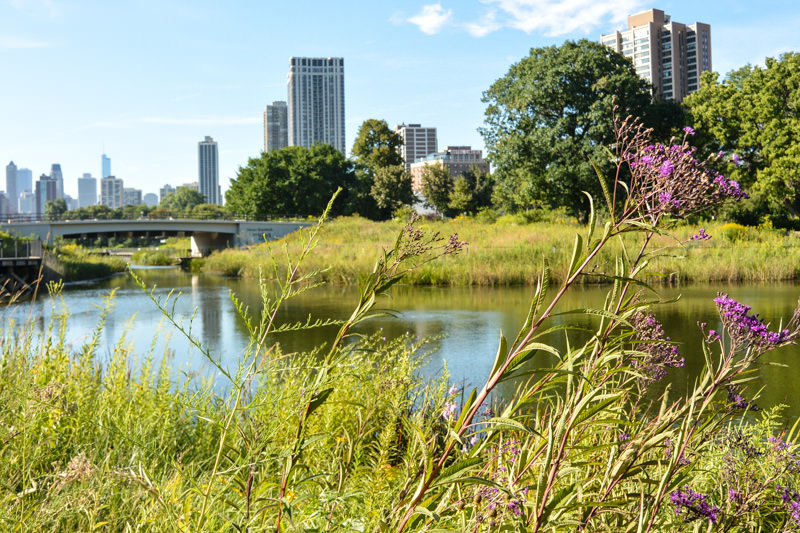 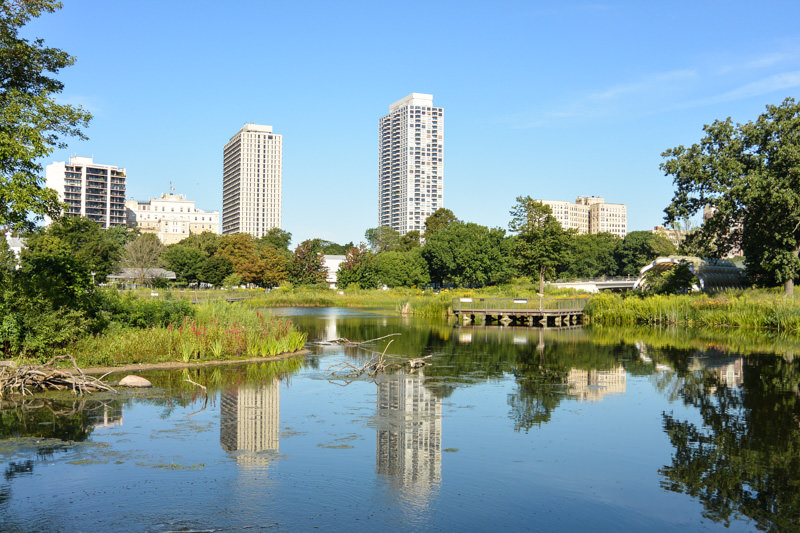 It was so peaceful, so serene, and like I wasn’t in Chicago at all (aside from the big-buildinged backdrop, of course).

I could have walked for hours, watching the ducks, and the reflections on the surface of the pond, feeling the sun bright but not too hot on my back. These are the moments I missed about the Midwest.

I eventually meandered into the zoo, which I’ve been to several times before (it’s FREE!)… this time, I was more interested in watching the people than the animals. I couldn’t shake the feeling of outsiderness, and I was fascinated by locals’ habits like I would be in a brand-new country. Every single stroller-pusher mom was multitasking with a phone in her free hand – texting, snapchatting, watching YouTube videos. How different would my childhood have been, if my mom had been more immersed in her phone than in the world and in me? 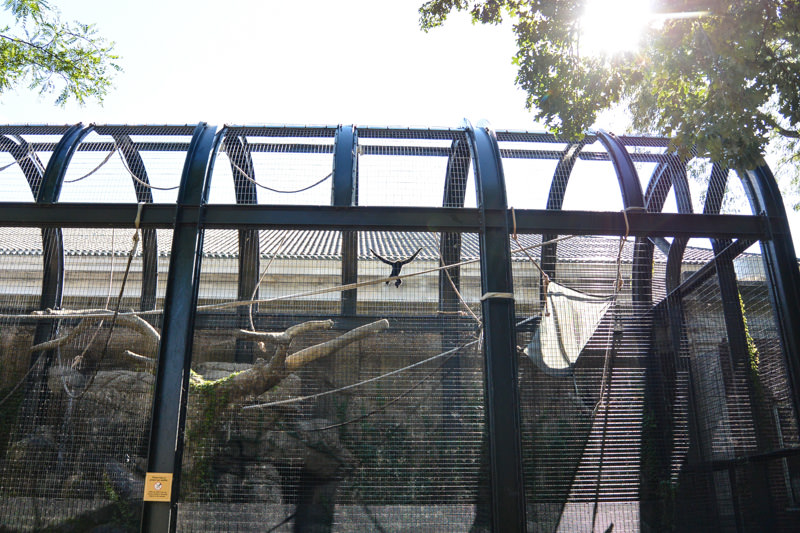 After the zoo, I still had time before I needed to take my uber to the airport. I wandered around outside, eventually finding the Lincoln Park Conservatory. Aside from two nannies chatting while halfwatching two toddlers wandering around on their own, I had the entire place to myself, which wasn’t the same serenity as the Boardwalk earlier in the morning. The women were talking so loudly, they filled the entire cavernous space with their voices – especially when they lost one of the children, and frantically began searching for him. He was found just a few minutes later, a tiny boy who could barely walk, standing on the edge of a decorative pool. 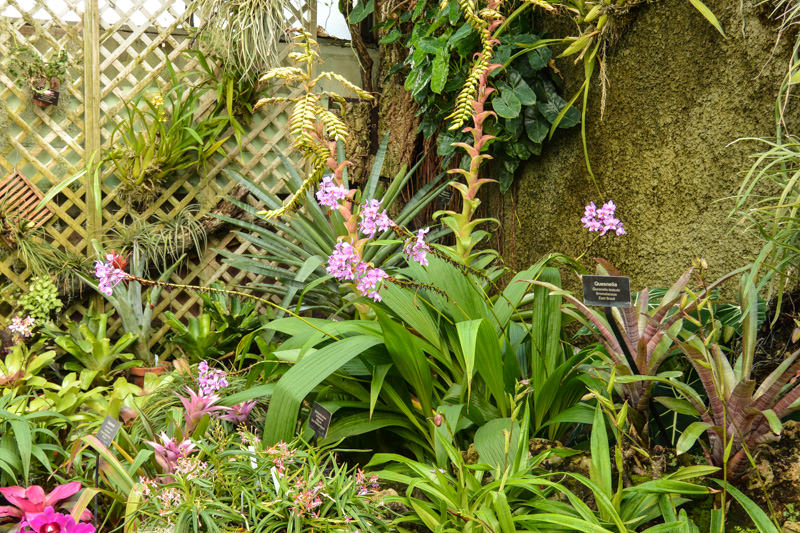 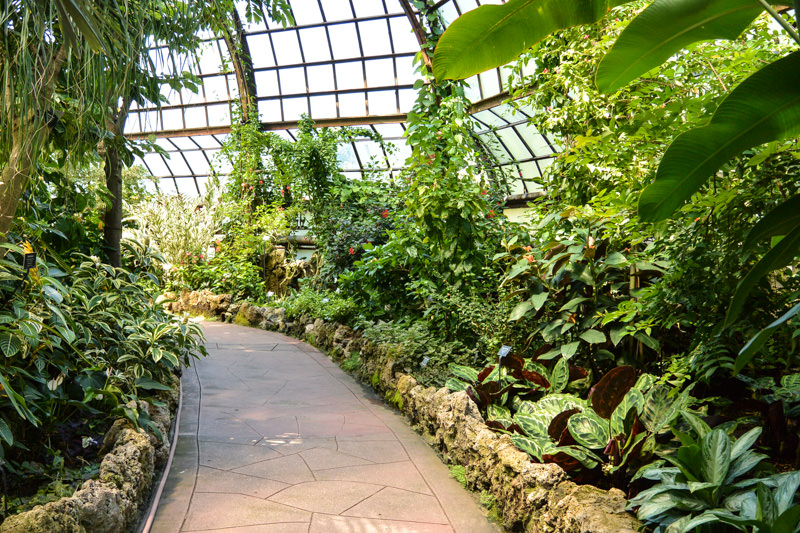 I left the conservatory, got a Freshii for lunch (hell yes), picked up my bags, and peaced the hell out to the airport at noon. I was feeling nostalgic and weird, happy and sad at the same time, about leaving the region I called home for so many years yet again. I used that excuse to take an Uber to the airport for $29.80 rather than the bus and train. It was worth it. 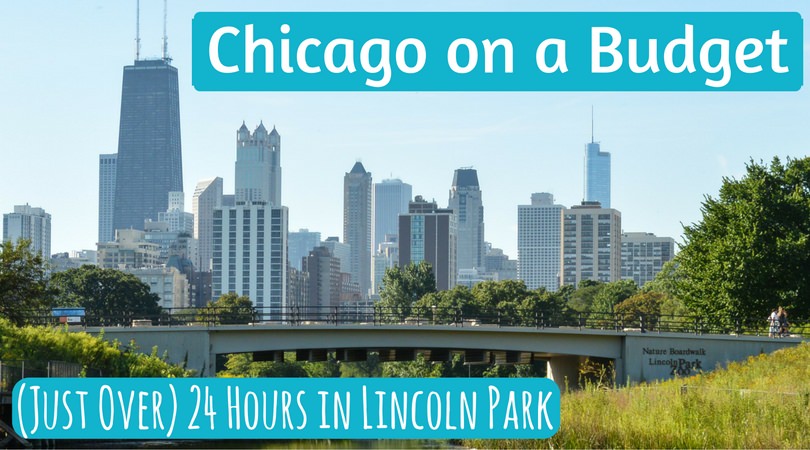 All in all, my just-over-24 hours in Lincoln Park, Chicago budget came to:

Accommodation in Lincoln Park, Chicago on a Budget:

$84 for Private Room with half bath Chicago Getaway Hostel

Transportation in Lincoln Park, Chicago on a Budget:

Food in Lincoln Park, Chicago on a Budget:

$10 with tip for Buddha’s Satay Bowl

$10 with tip for Oaxaca Bowl

Breakfast was FREE at the hostel

FREE! My first day, I wandered around the neighborhood, photographing and people watching. My second day, I visited the Nature Boardwalk, the Lincoln Park Zoo, and the Lincoln Park Conservatory, all of which are 100% free.

I could’ve definitely cut down my costs, by not eating at Freshii (also the Jimmy Johns, but I ate that before getting in Lincoln Park so I’M NOT COUNTING IT), taking public transportation instead of uber, and staying in a nice dorm room instead of a private room with a half bath. But all in all, I don’t think I did too bad, and it was a fun and comfortable end to my whirlwind 3 week adventure in the Midwest.

(Just Over) 24 hours in Chicago on a Budget: Lincoln Park

Dorms start around $20 a night, private rooms at $80. You can book direct on their website here, or on Agoda here.

Easy-to-use map here. I couldn’t find opening hours – it seems to be always open? (If you know otherwise – please comment here and set me straight!) 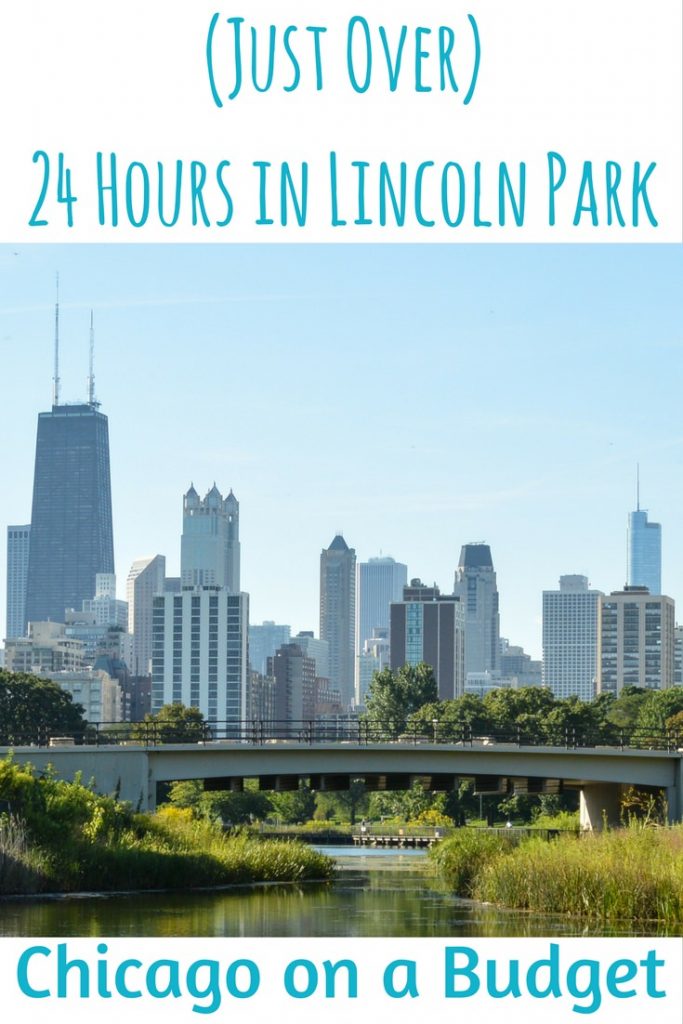 Any tips for visiting Chicago on a budget?