When my cousin Taylor messaged me a few months ago that she’d found flights to Merida for around $300 and what did I know about it… I didn’t have much to say other than that I’d heard it was gorgeous. Merida wasn’t even on my radar. 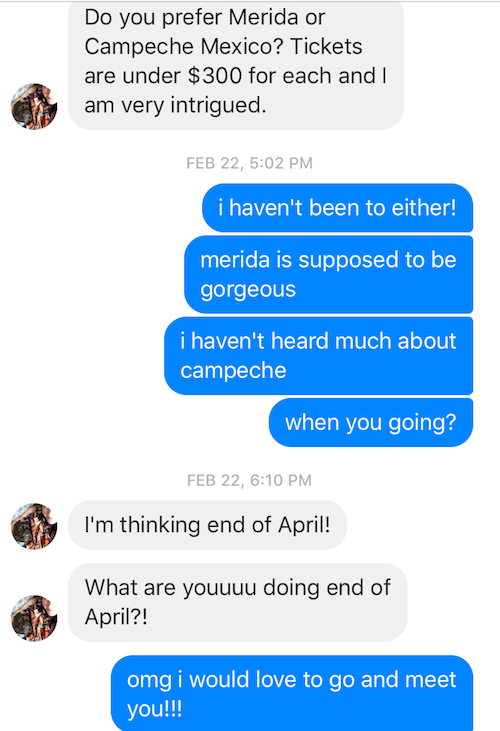 But when she invited me to join her (okay, okay, I half-invited myself), I jumped on the opportunity.

I’ll admit, yep, I knew pretty much nothing about Merida and I did almost zero research leading up to our trip. I landed in Merida pretty much clueless.

It’s not because I’m always a bad travel mate – I swear! I’m usually all up on the planning! – but the weeks leading up to our trip happened to be one of the busiest times of my life thus far, due to a combination of moving across the country from Puebla to Puerto Vallarta, a few work crises, delving deep into my master’s degree, and rescuing, rehabbing, and adopting out a dog we found who’d been hit by a car and left paralyzed (on top of running this lovely blog, of course ;)) 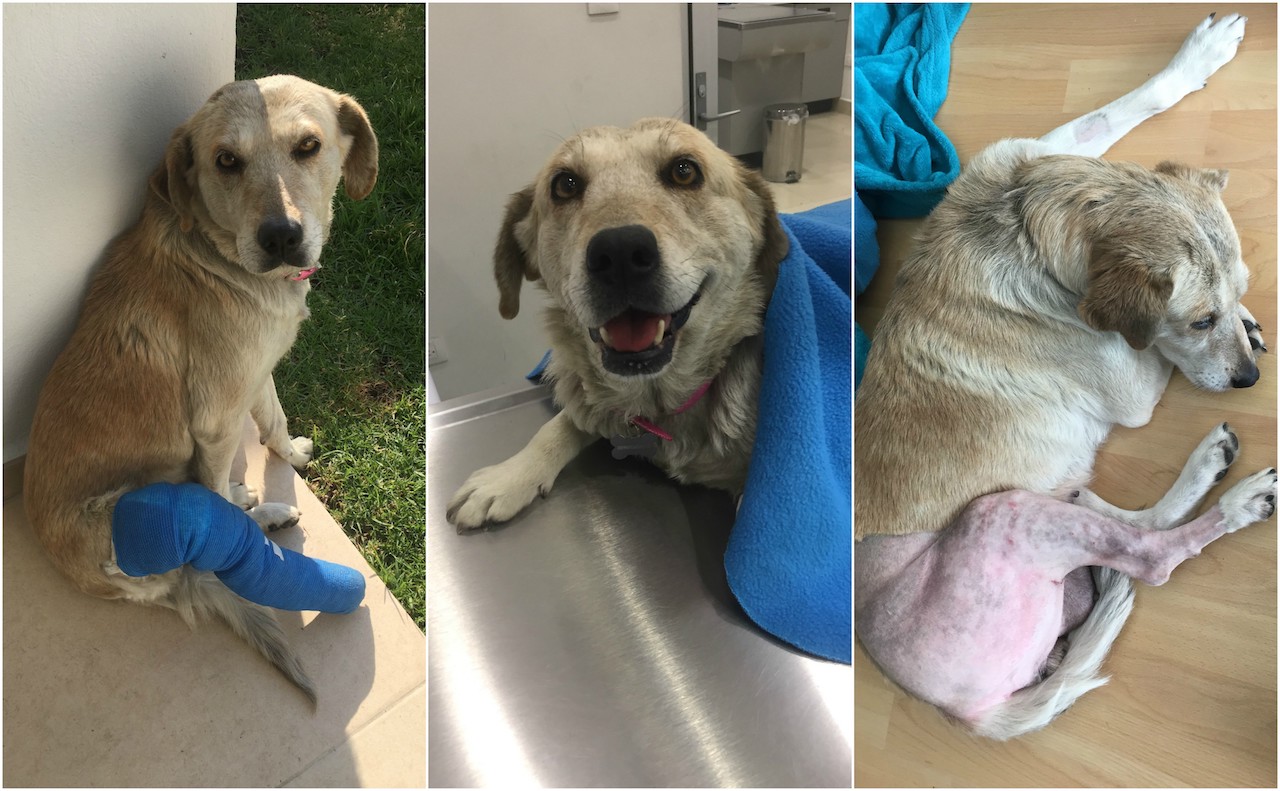 Millie during her rehabbing: a good excuse for being too busy to research (and yes, she found an incredible home!!)

Still, going to Merida with my cousin (and her friend, Dawn, and my friend, Sam) ended up being one of the best spur-of-the-moment YESes of my life.

I absolutely fell in love with Merida, and look forward to an opportunity to go back in the future. If you’re looking for a girl’s trip location that can’t be beat in terms of activities for all and killer prices, look no further!

(Merida would also be a great couple’s retreat or even a solo-cation.) 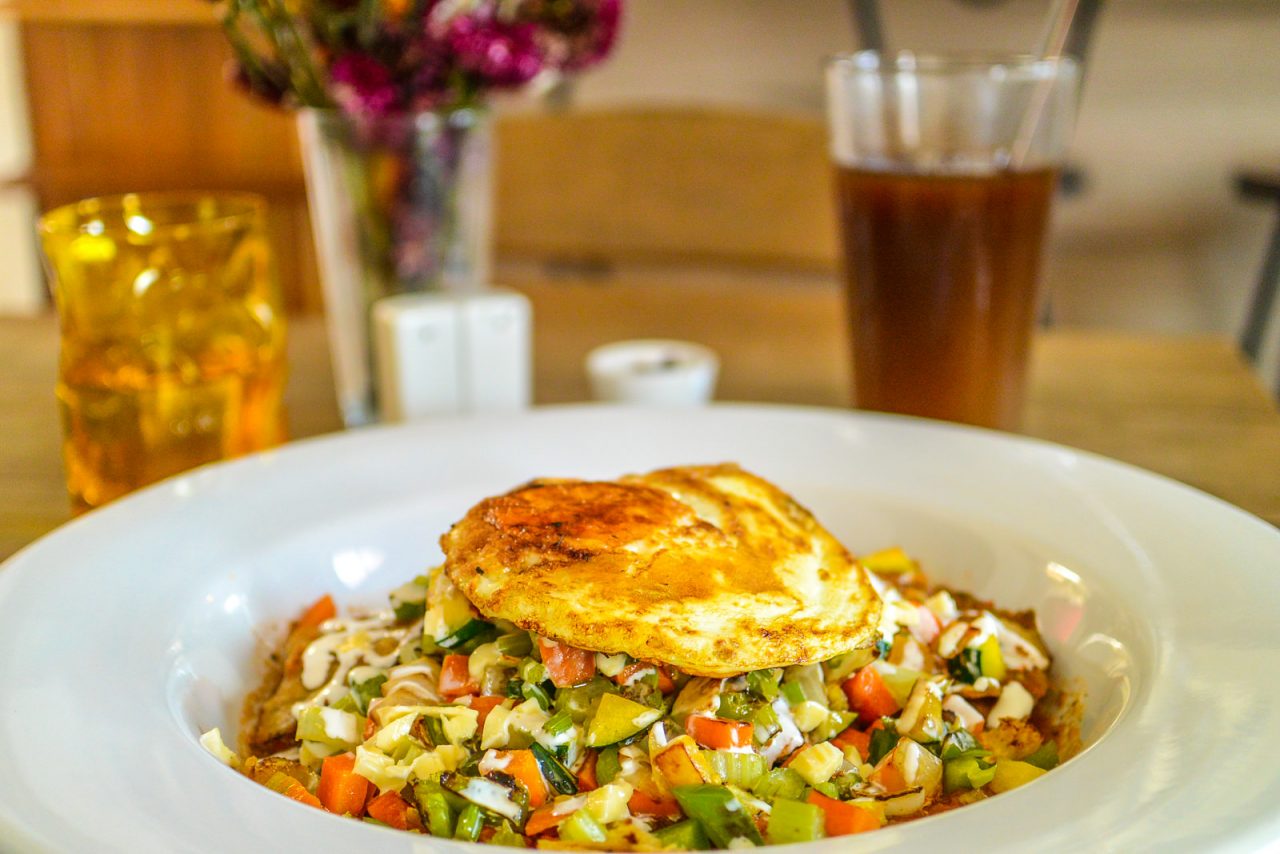 Whether you’re a veggie like me or not, Merida has delicious options for you.

The cuisine is known as Yucatan cuisine (as is the state and region), and is heavily influenced by the Mayan culture.

I’d never had Yucatan food before, and was pleasantly surprised by its uniqueness. Some of my favorites were salbuches and panuchos (both a bit like tostadas, and if you’re a vegetarian be sure the beans aren’t made with lard). Papadzules (corn tortillas in pumpkin seed sauce stuffed with hard-boiled eggs and topped with salsa) are another iconic dish of the region, but it wasn’t my favorite. Huevos motulenos (fried eggs on tortillas with refried beans and salsa) are the most famous breakfast dish of the Yucatan, and easily vegetarianized.

If you’re into meat, cochinita pibil is supposed to be the best ever and it’s hard to beat queso relleno for the cheese lover (a whole hollowed-out Edam cheese stuffed with pork and veggies). 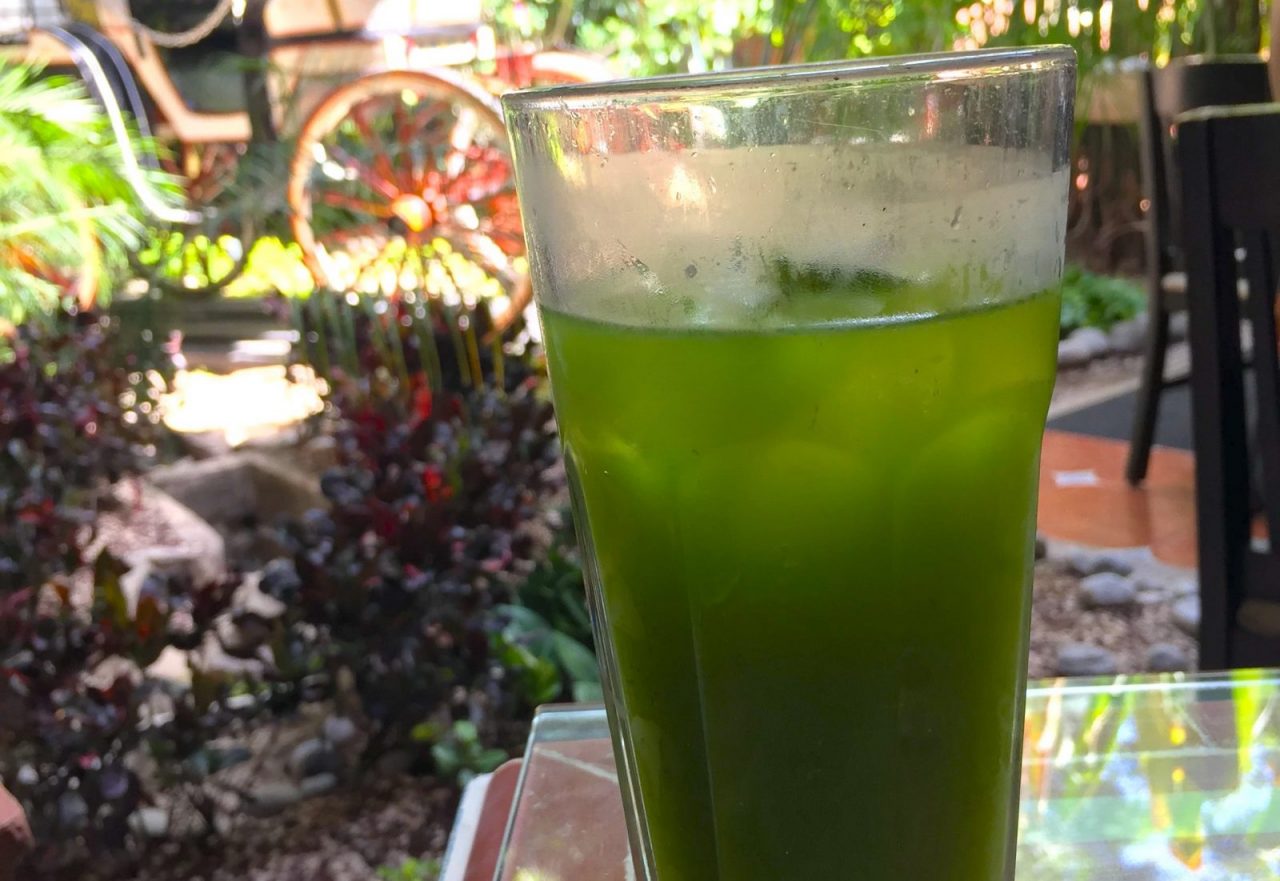 Chaya is a spinach-like leafy-green vegetable that was important to Mayan cuisine and has superfood properties.

It also makes an insanely refreshing green drink: absolutely crucial considering how crazy hot Merida is. Especially in the end of April, when we went.

I’d never heard of Chaya before going to Merida, but I had one of the juices every day (okay, a few times a day) and STILL crave the thing! I’ve been trying to find chaya seeds to grow in my little container garden and no luck. 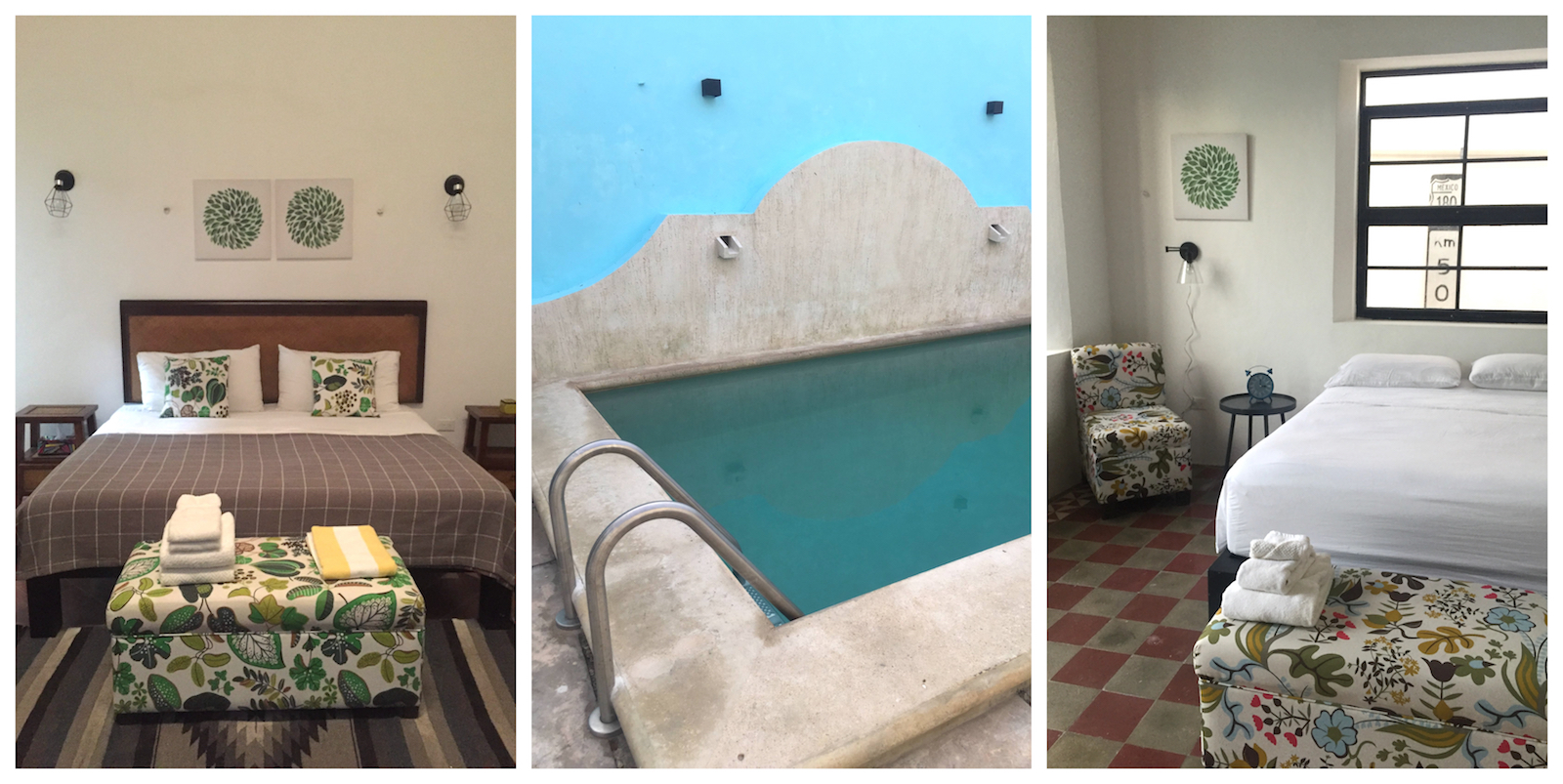 Us 4 girls stayed in a gorgeous 4 bedroom, 3 bathroom, restored historic home with its own private pool in the Santiago neighborhood, walking distance to everything in the historic center. The whole thing was only $130 a night total plus electricity (which worked out to be around $100 for the week).

I was absolutely in love with the aesthetic of the place, and it was the perfect refuge from the heat of the day. 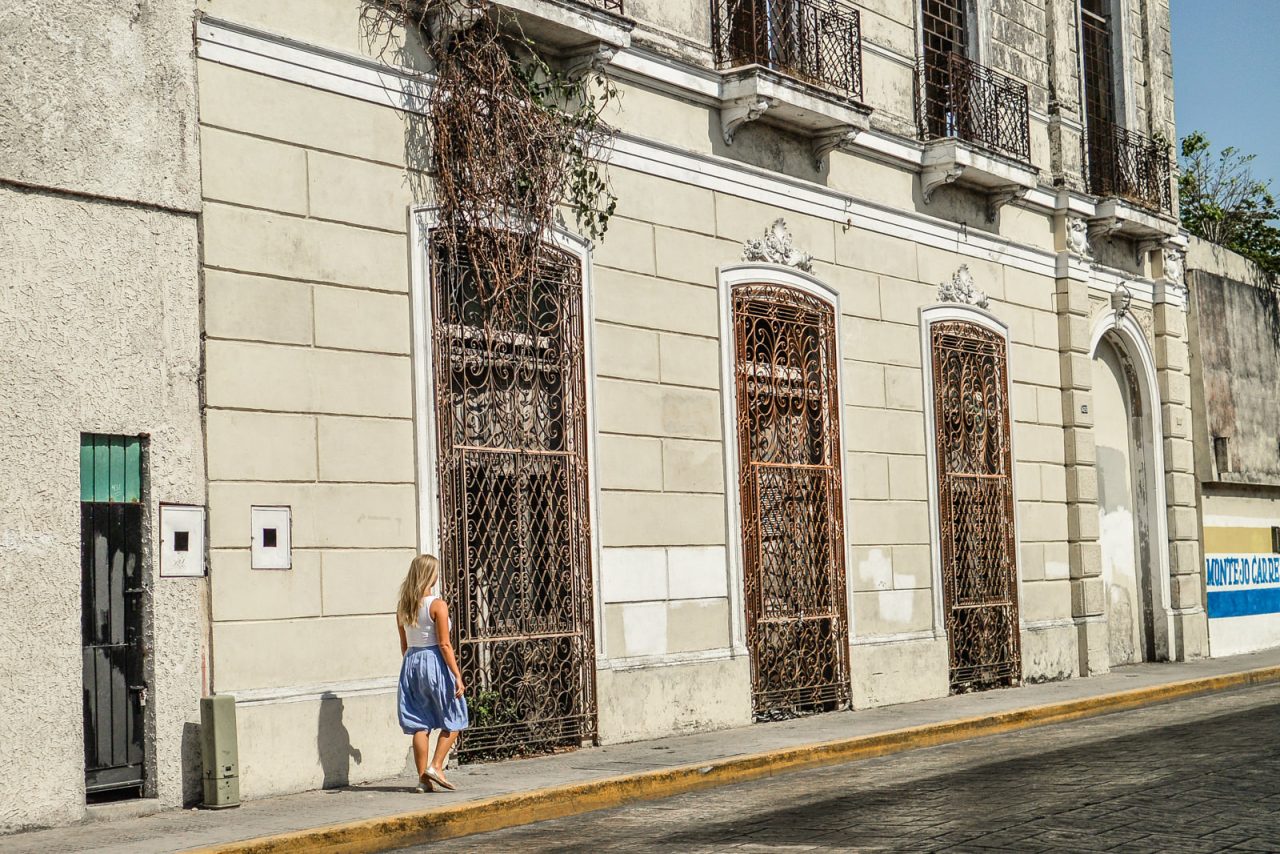 If you aim to be within 20 minutes’ walk to Plaza Grande, you’re in luck and will be able to walk to pretty much anywhere and everywhere you want to go.

If you can’t walk there, either because it’s too fricken hot (which is a real possibility) or you just feel lazy (no judgment!), Uber is alive and well in Merida (here’s $5 off your first ride). It’s especially handy for getting to and from the airport. 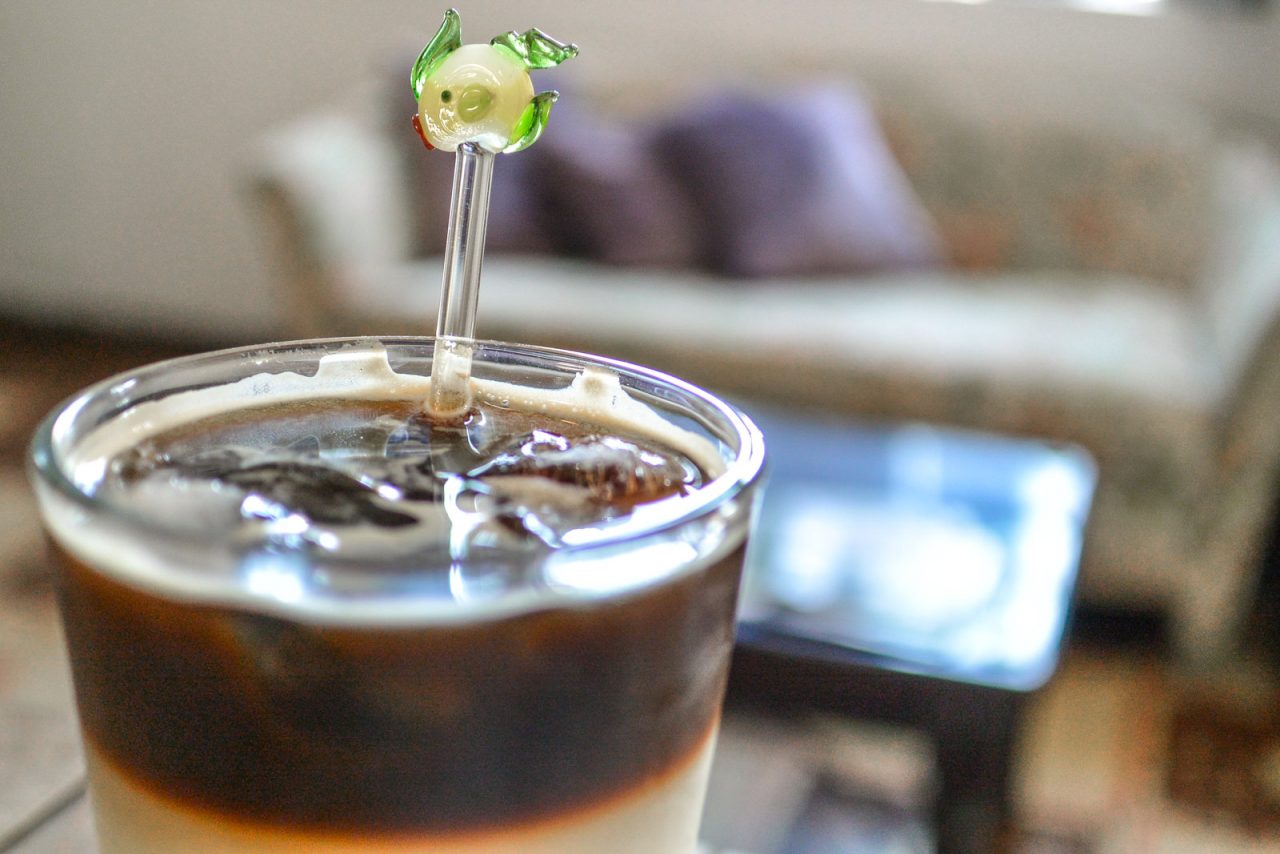 The beverage culture in Merida is on point, which is good news because the heat and humidity will have you crying for a cool drink and a shady place to sit.

Cafes: My favorite coffee in the world is from Mexico, and Merida didn’t disappoint when it came to cute cafes to sip them in! Cafe Organico gets top marks and has a 2 for 1 drink special on Fridays, and they’ve got a ton of vegan milk choices.

Cantinas: When it came to night-time drinkies, there were also a plethora of options. One of my favorites was right by our Airbnb, Cantina El Cardenal, though the band was SO LOUD it was actually painful. Sit away from the stage if they’ve got live music, trust me. For a more upscale drink, you can’t go wrong with Pancho’s 2 for 1 happy hour (must sit at the bar for the deal). 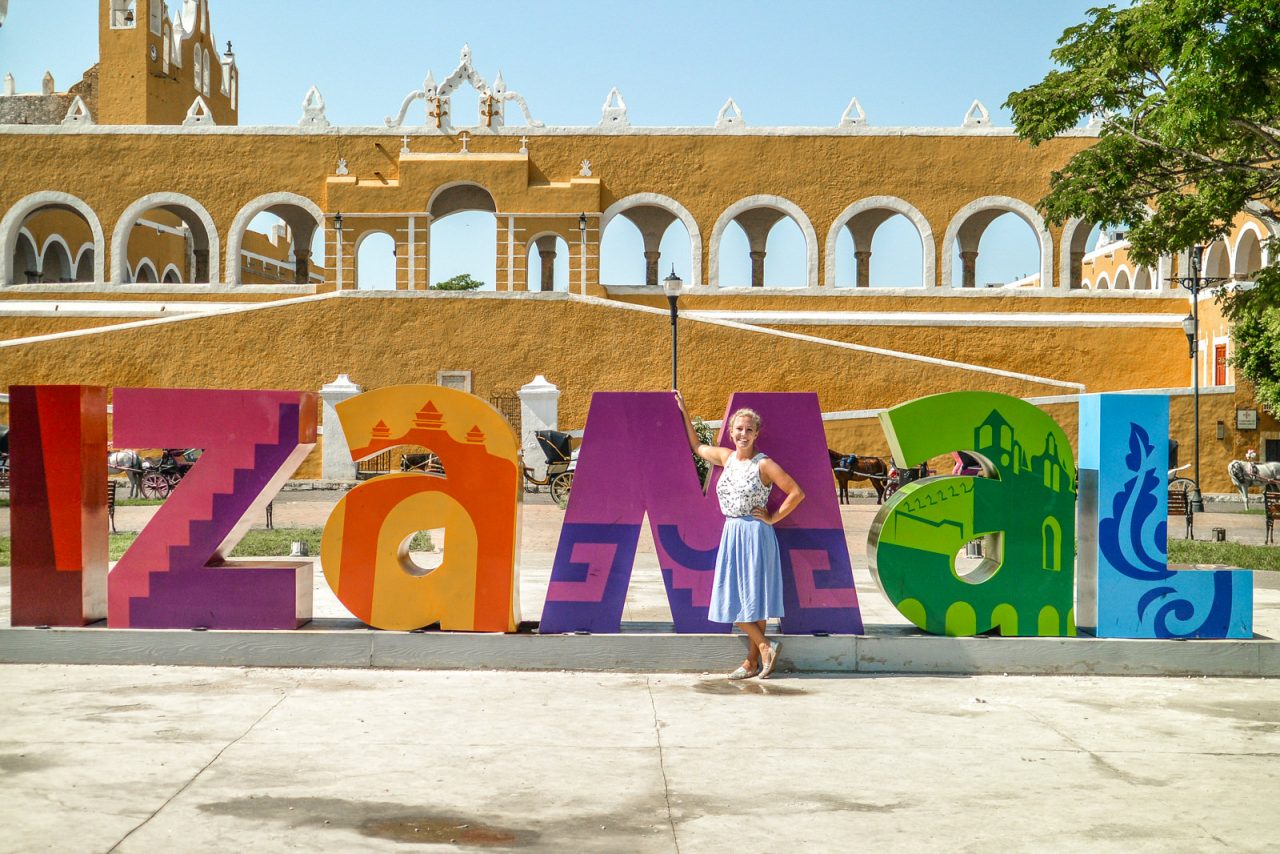 You definitely don’t have to get out of Merida, as the city has something going on every single night of the week, usually around Plaza Grande. This is truly a city where you need to be boring in order to be bored. Check out this list of FREE cultural events in Merida, at least one for each night of the week.

Merida is the PERFECT homebase for exploring nearby towns and sites like Ixamal, Campeche, Progreso (a beach town just 30 minutes away), cenotes, and ruins/archaeological sites.

One note: we ended up in some sketchy places looking for cenotes (we did eventually find one, though!). If you’re a woman traveling alone (or even a small group), I’d recommend exercising caution with your personal safety especially during low season, when there are fewer visitors to the further-out cenotes. 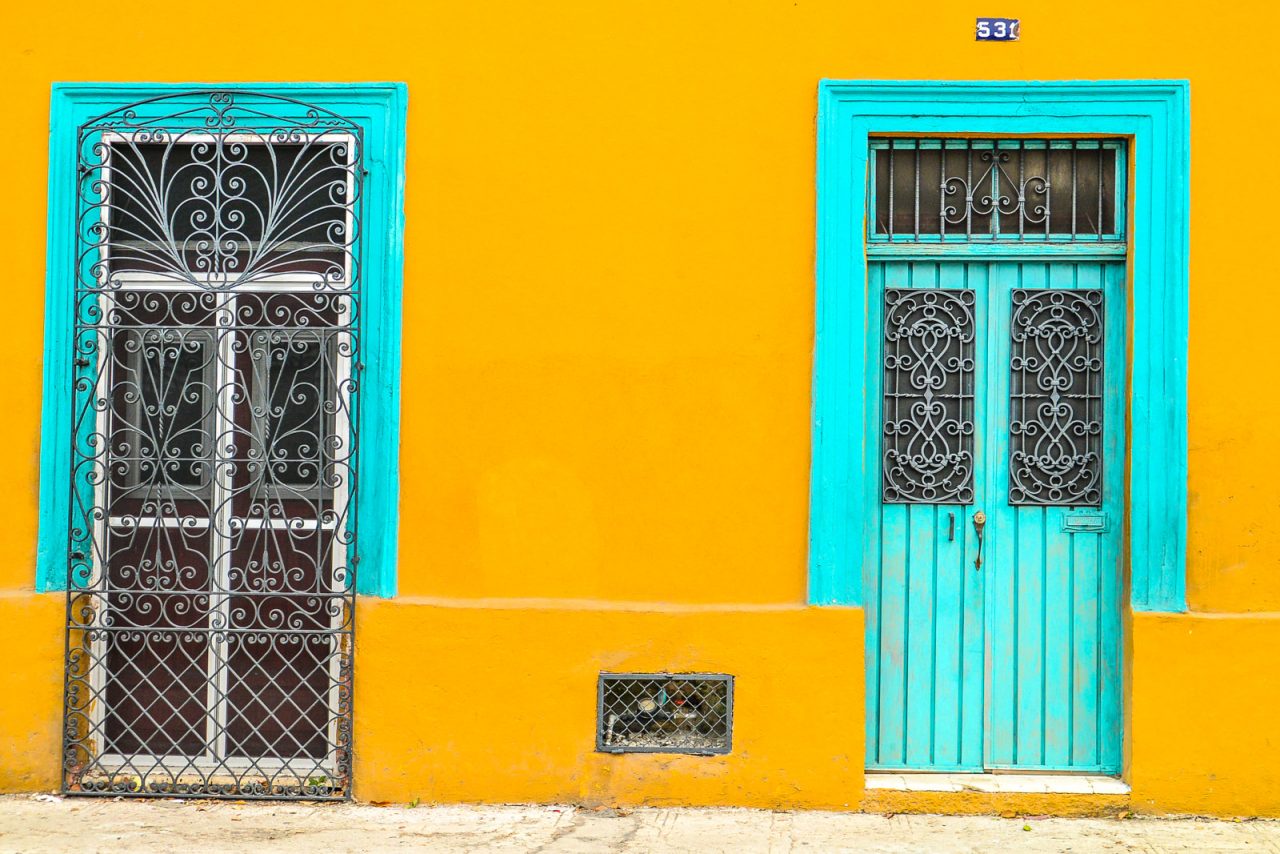 Merida is killin’ it in terms of Instagrammable doors and streets. This place is so incredibly colorful and picturesque! 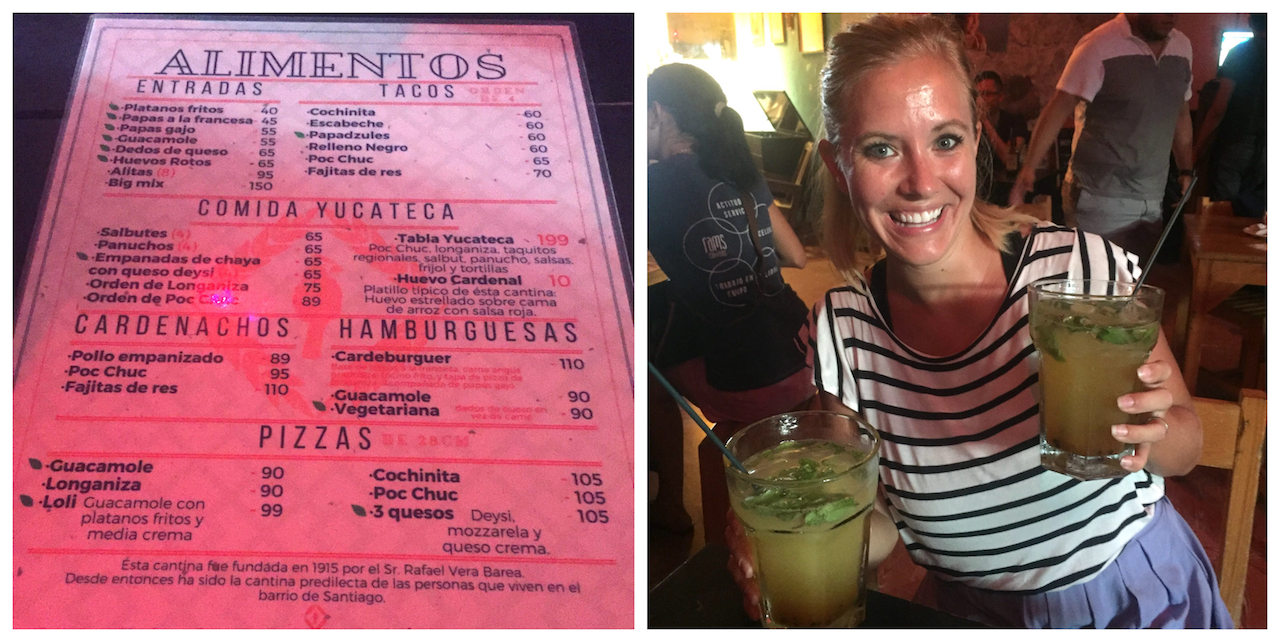 If your version of Mexico is typically Cancun, you’re in for a treat. Merida is much less of a tourist town, and because of that, has less tourist pricing. Everything from souvenirs to restaurants to car rental is way cheaper in Merida compared to more famous tourist hotspots.

I don’t know if this was just because we were visiting in a lower season, but pretty much every place we went had some kind of 2 for 1 special. 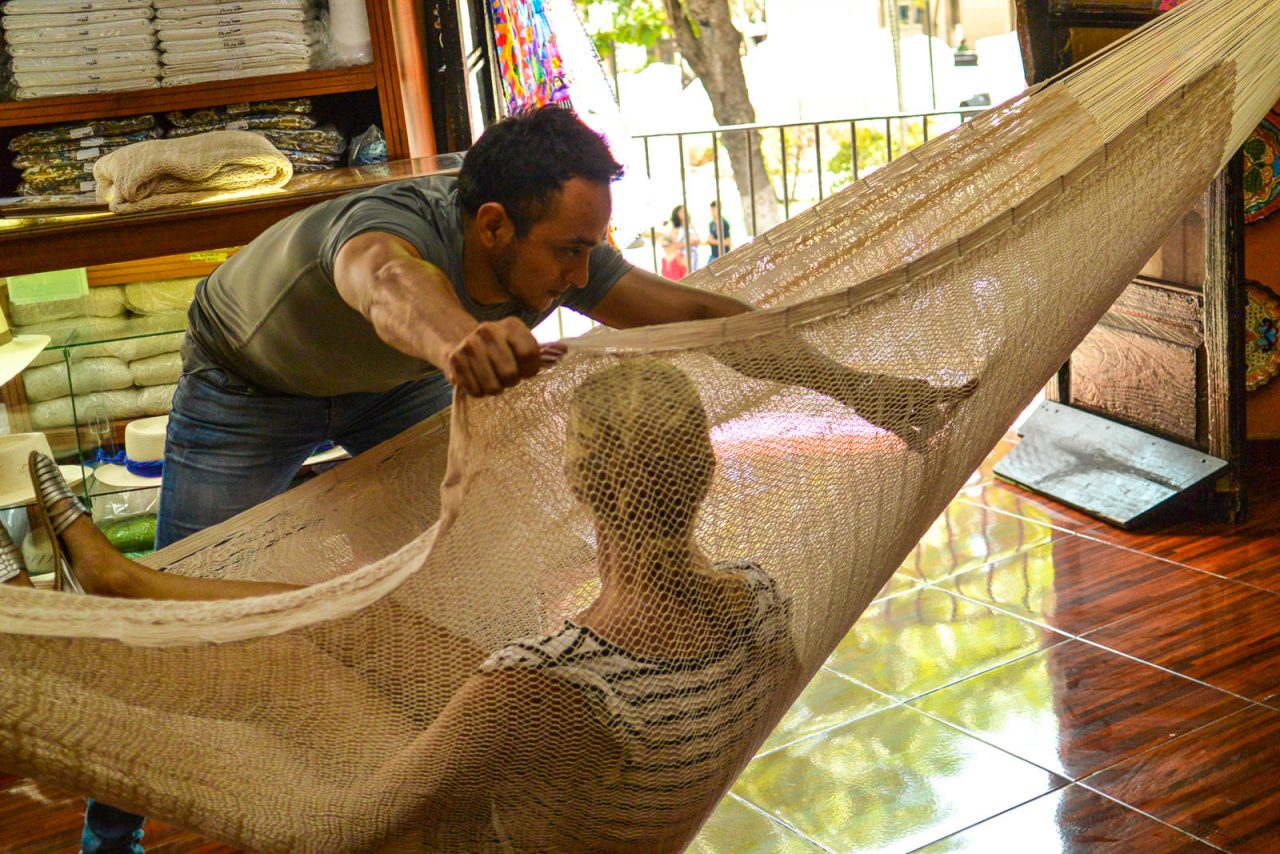 I don’t normally consider consumerism to be a pastime, but Merida does have some great markets and shops, at VERY affordable prices. Try to buy direct from the artisans when possible.

I’m not big on souvenirs and try to ascribe to a minimalist lifestyle (my succulent collection is another story…) but I picked up an absolutely gorgeous and very strong Mayan hammock along with a hand-woven hat. I love both, still. 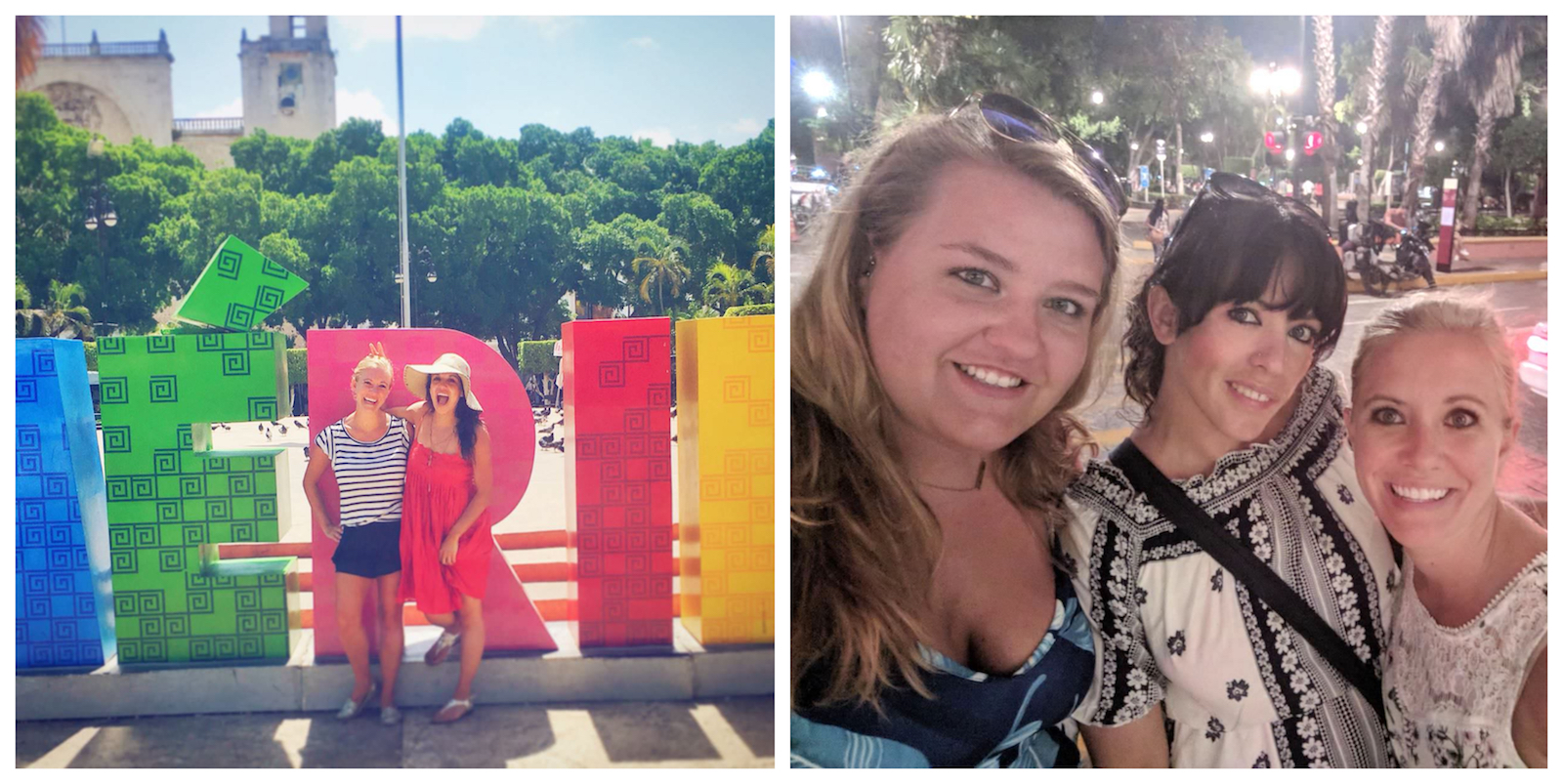 Yeah, this one is super subjective and personal, but I had an absolute blast in Merida with 3 great women: a beloved friend, an incredible cousin, and an awesome new friend.

It had been a loooooong time since I got to spend quality time with my cousin (really, since my mom died nearly 15 years ago). It was absolutely priceless to spend time with her on this trip. And just a hella good time in general.

I hope if you go to Merida, you leave with as many amazing memories as I did. <3 This was a trip that was truly good for the soul.

Pin it for Later: 10 Things I LOVED About Merida, Mexico 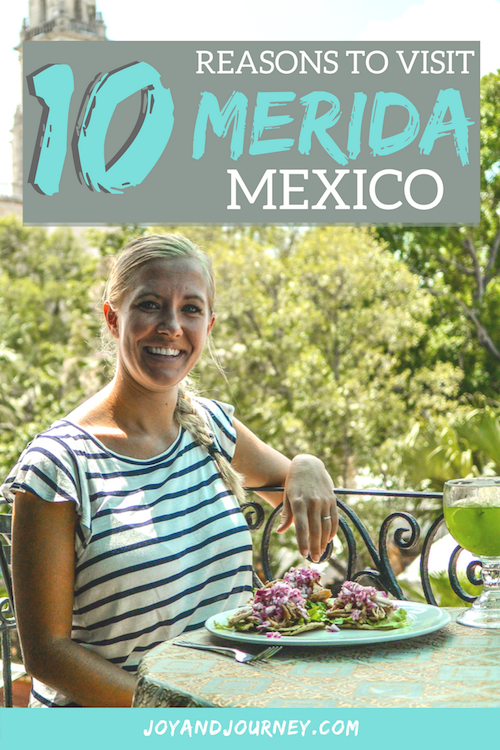 Have you been to Merida, Mexico?