While you’ve got a month before you need to SERIOUSLY consider your New Year’s Eve plans, some of you might already be getting a jump on things… not that I plan my NYE plans like 6 months ahead or anything 😉

Or maybe you’re already wanderlusting for next New Year’s Eve, especially if you’re stuck at home or somewhere less-than-fun (a boring second cousin’s wedding?) for this year’s celebration.

Of all the places I’ve celebrated New Year’s Eve, Rio de Janeiro has to be my absolute favorite and I would recommend it to anyone. I loved it so much, I did it twice! And I brought my dad for the next round.

Whether you’re ringing in the New Year solo, with a partner, with friends old or new, or with family – Rio de Janeiro is an absolutely magical place to do it.

If you’ve decided on Rio de Janeiro for New Year’s Eve along with 2 million other celebrants, here’s all you’ve got to know!

What is New Years Eve in Rio de Janeiro? 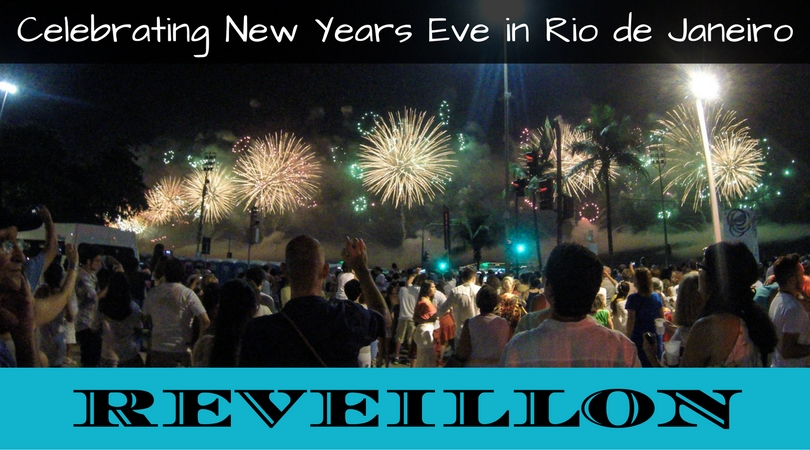 New Year’s Eve in Rio de Janeiro is called Reveillon, and is the most popular celebration of the year after Carnaval.

What do I wear for New Years Eve in Rio de Janeiro?

You’ll see almost everybody dressed in mostly or all white. Dressing in all white amongst an all white crowd makes for some pretty cool photos, and it’s a fun tradition to participate in. Other than your wedding, when do you get to wear all-white? 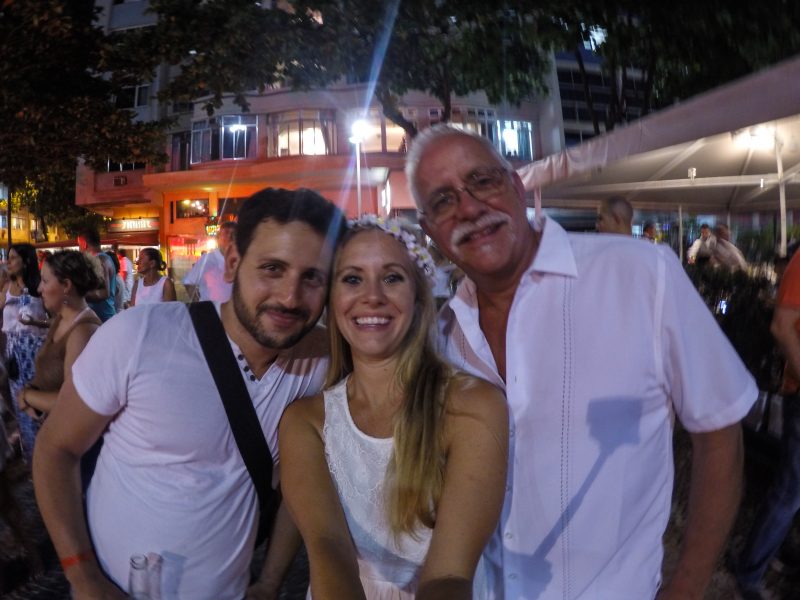 Aside from the fun aspect, going with the flow and wearing mostly-white keeps you from sticking out like a sore thumb as an obvious tourist… meaning you’re less likely to get scammed or robbed.

If you don’t have all-white clothes or don’t want to go all-white, you can add some accent colors, which superstition suggests will influence your future. Green is for good health, yellow is for wealth, red is for passion and love, and purple is for inspiration.

How do I say “Happy New Year” in Rio de Janeiro?

How do I celebrate New Year’s Eve in Rio de Janeiro?

You have a couple options.

The most popular (and cheapest, and I think most fun) option is to stand on the beach or the boardwalk with the rest of the crowd to enjoy the fireworks. The weather in Rio de Janeiro in the end of December is pretty hot, and being in a crush of people will only make it hotter, so be prepared. Vendors will wander around selling beer, booze, water, and soft drinks, but you can also bring your own. 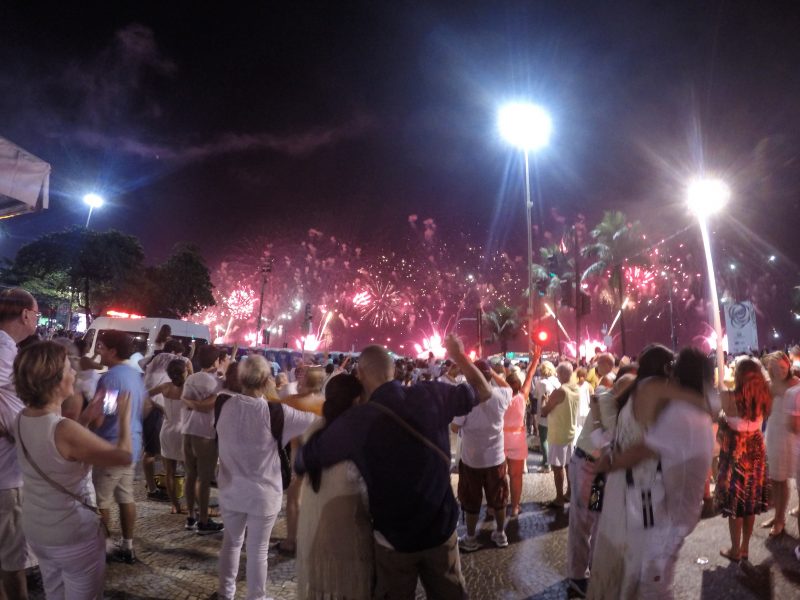 the stroke of midnight on the Copacabana boardwalk

Another option is to spring for an ocean view room, and watch the fireworks from the comfort of your hotel balcony. These are pretty pricey and you’ll miss out on the fun vibe of the street.

Another option is to go to a hotel, bar, or restaurant party. That’s what we decided to do on our second NYE in Rio, with my dad. Most times, you will need to reserve far in advance, for prices ranging from R$30 to R$2000 per person, depending on the venue and what the ticket includes. We were lucky enough to walk right into an Irish bar with a live band and a relatively small (R$100) cover.

Where should I celebrate New Years Eve in Rio de Janeiro?

For the beach party, the main stages are located in front of Copacabana Palace and across from Rua Santa Clara, with more stages spread between Leme and the Copacabana Fort. These are the most iconic and most famous (but also most crowded) locations. 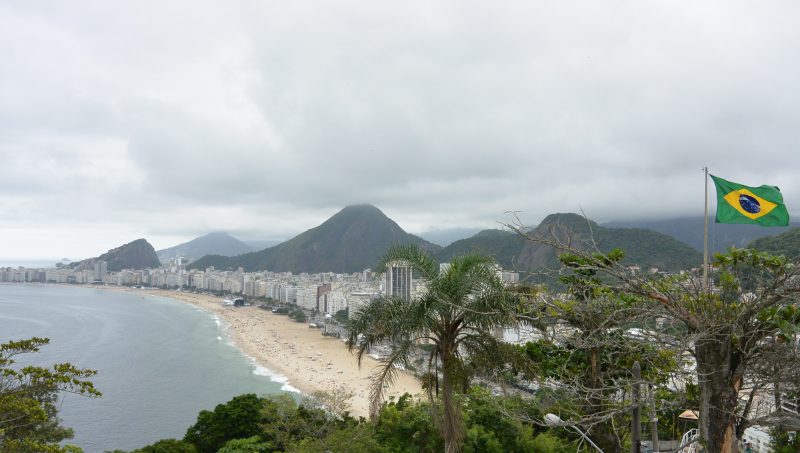 If you want to avoid the crowds, you can seek out a beach further away from the shows (Leblon is an option). You don’t want to get too secluded though, as being alone on the beach at night in Rio de Janeiro is like asking to be robbed.

One of the most famous locations to celebrate New Year’s Eve in Rio de Janeiro off the beach is at the Copacabana Palace, but it definitely comes at a price. The New Year’s Eve party is R$1200 per person, but includes cocktails, dinner, champagne, and a live band. For a cheaper options, dinner at the Elysee Salon is “only” R$600 and includes a buffet, booze, and a DJ. Regardless of where you celebrate New Year’s at the Copacabana Palace, you’ll have access to a special balcony for viewing the fireworks.

What does it cost to celebrate New Years Eve in Rio de Janeiro?

That all depends on your preference! 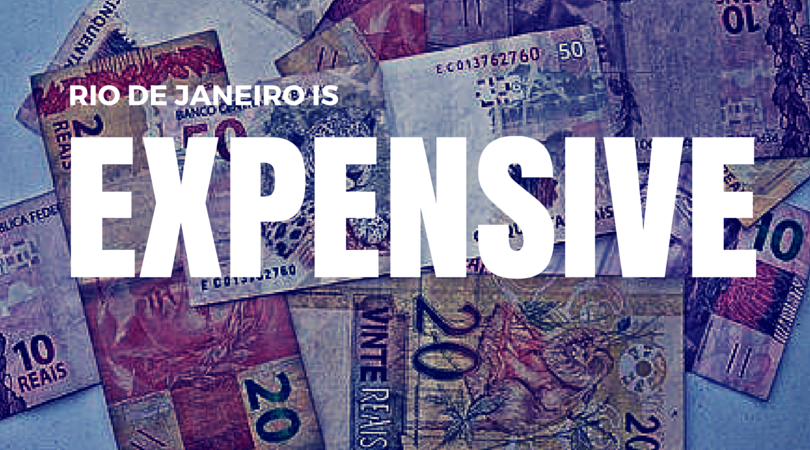 … but only if you choose it to be!

You can hit the beach for the fireworks for zero reais, and bring your own drinks and snacks from the grocery store for a couple reais each. Or you can splash out and book tickets to an expensive party in a restaurant or hotel… one of the most expensive and most prestigious being the Copacabana Palace mentioned above.

When is New Years Eve in Rio de Janeiro?

While like most anything in Rio de Janeiro, the festivities for Reveillon start late, you should still stake out a spot early if you plan to be on the beach. Try to find a spot that isn’t too crowded, and go with a group so that if someone has to run to the bathroom, the others can hold the place. 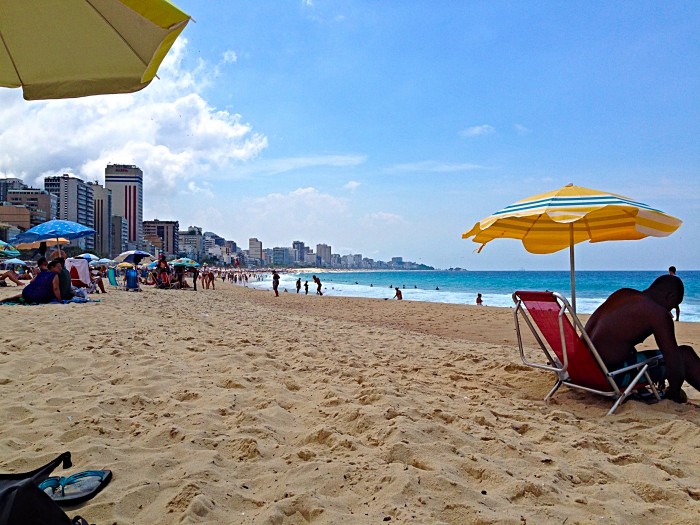 get to the beach, stake out a spot, and post up early! This one is in Leblon

Traditionally, people gather during the day of December 31 to honor Iemanja, an African-Brazilian sea goddess of fertility, by placing offerings like flowers into the sea.

The New Year’s Eve beach party officially starts at 7pm, when DJs and bands will start taking the official stages.

What are some New Year’s and New Year’s Eve traditions in Rio de Janeiro?

As mentioned above, flowers and other small offerings are placed into the sea to honor Iemanja, a sea goddess. You want the offerings to be swept out to sea in order for your wish to come true. If your offering is sent back to you, it was not accepted and you need to try again!

People wear white (and sometimes brand new clothes as well) as a symbol for the renewal that the New Year brings. It is a time to put the problems of the past behind you, and to look forward to the future.

Many people cleanse themselves of past problems by immersing themselves in the ocean water.

At midnight, a tradition is to jump over 7 different waves to make your New Year’s wish come true (I never dared this – soaking wet in white clothing? That’s a wardrobe malfunction waiting to happen)

At the stroke of midnight, it is popular to eat 7 raisins, or grapes, or other small food (especially with seeds), and then to save the seeds for the rest of the year.

What Should I Be Aware of Before Celebrating New Year’s Eve in Rio de Janeiro? 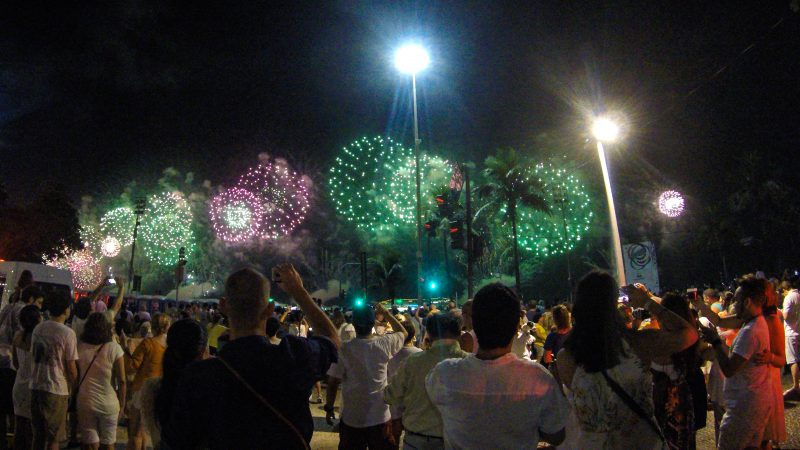 CRIME – Rio is unfortunately plagued by petty (and not so petty) crime, and New Year’s Eve is a particularly iffy time. Carry as little cash on you as possible.

PHONE/CAMERA SNATCHING – If photographing the fireworks, be sure to have your phone attached to your body with a tether, or wear your camera with a strap. A particularly popular crime is for a gang of boys to run by at midnight and grab every phone and camera in sight before sprinting off down the beach and disappearing into the crowd. You won’t catch them.

ROAD CLOSURE – On December 31 and in the early hours of January 1, many roads in and out of Copacabana will be blocked. Plan to cut out of the fireworks early and head out of the area on foot if you plan to catch what will be a pricey cab (or prearrange a driver with your hotel), or walk home. Avenida Atlantica is completely closed to traffic after 3pm. 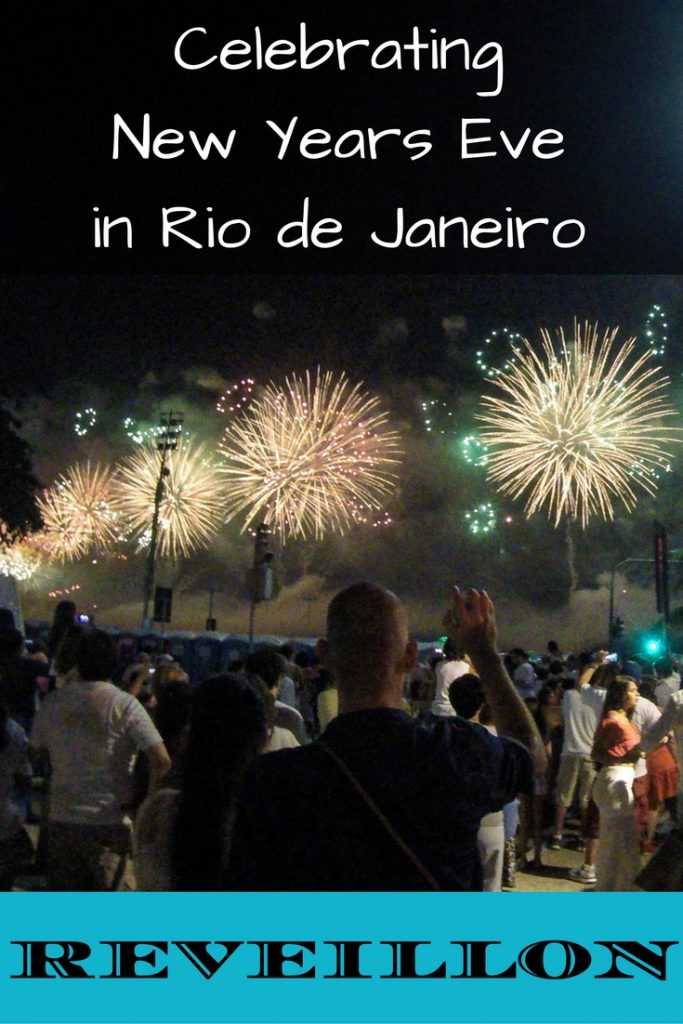 Do you have any questions about celebrating New Year’s Eve in Rio de Janeiro?