Bolivia did not feel unsafe to me.

Granted, I do live in Mexico (and hear endless PSAs about how unsafe my adopted home is, mostly from middle-aged Trump voters who visited Acapulco once, before I was born), and before this, in Brazil. Rather than making me numb – or as some might say, naive – to the dangers of travel, I’d say it makes me more knowledgeable and sensitive. I’m also married to a professional security consultant who specializes in physical security in Latin America, so that ups the awareness/paranoia factor, lol.

Before traveling to Bolivia, most blogs I read emphasized the potential danger… which, to be honest, exists in every city, everywhere (and I’d argue especially in the United States).

Upon arrival, though, I just didn’t feel it. In fact, I liked La Paz (the most dangerous city of them all, supposedly) so much that I went back at the end of my Bolivia trip for a few bonus days!

All that being said, I’m not advocating you throw on your most expensive jewelry, shortest mini skirt, and run through the worst-reputed streets of La Paz at 2 in the morning.

Aside from common sense, there are a few things you can do to help make sure you stay safe while traveling in Bolivia.

1. Take the tourist bus when possible. 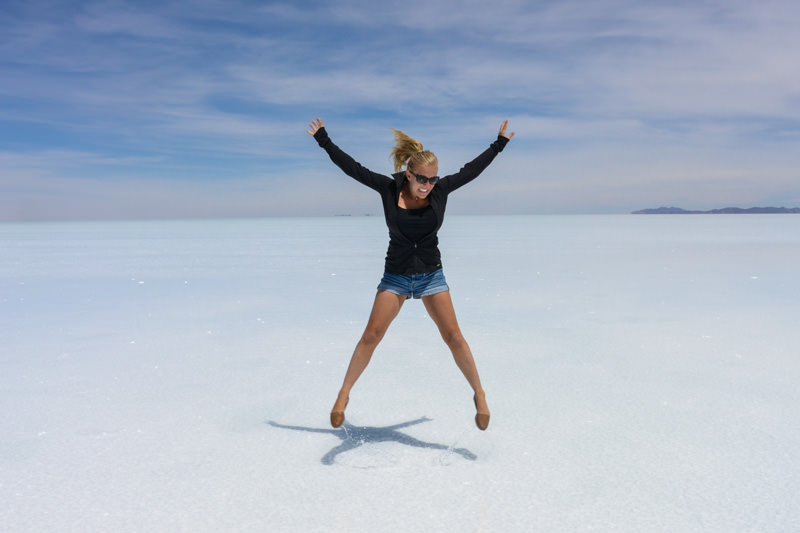 Especially from La Paz to Uyuni and vice versa.

Yeah, in that whole “traveler versus tourist” false dichotomy, this action would be a definite tick in the “tourist” category. (But who cares?)

[full disclosure: 90% of the buses I took in Bolivia were “regular” and they were all totally fine]

There are more downsides. The tourist bus, Todo Turismo, is more expensive than the regular bus and has fewer departure options.

That being said, it is more reliable, more punctual (important if you’ve got an early departure Uyuni tour you’re trying to make), and more secure. The “regular” buses in Bolivia have petty theft problems and the La Paz-Uyuni route in particular is known for. The most worrying issue for me, though, was that there is an alcohol problem with bus drivers on the “regular” overnight buses and realtively frequent alcohol-related accidents.

The Todo Turismo bus is also more comfortable (you can actually sleep on it), which could work out to even save you some money, as you overnight on the bus rather than in a hotel/hostel (and Uyuni is one town I would DEFINITELY advise you to skip).

2. Only take taxis called for you by the hostel/restaurant. 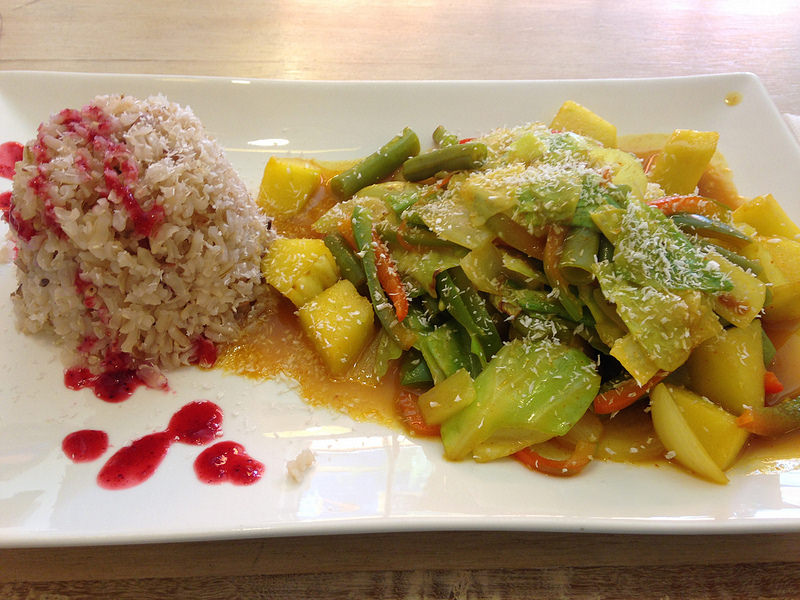 This piece of advice stands in most Latin American countries. Don’t flag taxis off the street.

Have you ever heard of an express kidnapping? It’s where an unscrupulous taxi driver (or faux taxi driver) agrees to take you to your destination but instead busts out a gun, knife, or picks up a few extra friends before driving you to an ATM and instructing you to withdraw all your money, or to hand over your card and code so they can withdraw all your money (which they will do while you wait under duress), steals all your on-person valuables, maybe beats you up a bit, and then kicks you out in a sketchy part of town.

Bolivia doesn’t have Uber (yet – but if you’re in a city with Uber and want to try it out you can get your first ride for free with this link), so the next-best thing is to ALWAYS ALWAYS ALWAYS ask someone to call a registered cab for you. Because the driver, his/her cab, you, and your destination are registered and tracked, this puts a stop to any potential express kidnapping situation, which is a very opportunistic crime.

3. Don’t arrive in middle of night. 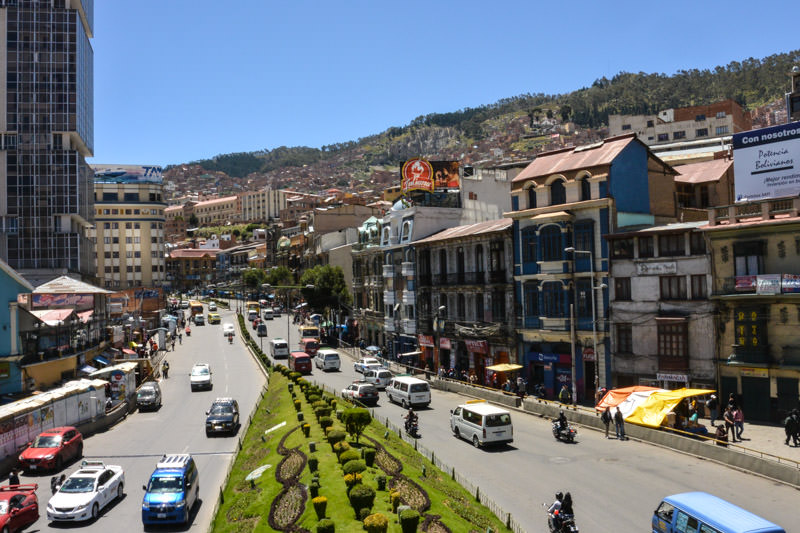 Bright and cheery in the light of day, but it looks a little sketchy and scary at night

Whether you’re arriving into La Paz on a plane, or into Sucre on a bus, it’s best not to arrive to a new city at night, especially late at night.

You know your parents’ advice that nothing good happens after 10pm (or was that just my dad justifying a ridiculously early curfew to 16-year-old me)? Total honesty: I’ve actually found that most fun stuff and exciting stories happen after 10pm… but that this mantra definitely holds true for outside of airports (which are just generally sketchy, in every city across the world), bus stations, and ports (not applicable in landlocked Bolivia but you get my drift).

Night-time is also when taxi drivers jack up fare prices, and when you’ll feel more sketched out, even if it actually isn’t more dangerous.

4. Plan ahead for airport pickup.

Well, what about getting from the airport to my hostel? you might be wondering.

The most preferable option, especially if you arrive late at night (I know I recommend not to do it above, but sometimes you just don’t have a choice, I didn’t), is to have your hostel or hotel arrange a pickup for you. Then, the driver should be waiting for you with a sign with your name on it. Easy peasy. Yes, it’s slightly more expensive, but your safety and peace of mind is SO worth it.

You can take a registered taxi from the airport as well, and that’s what I did because I checked with my hostel and they did NOT offer an airport pickup option. Ask at Tourist Information if you don’t know where the registered taxi queue is or need assistance.

5. Know at least a bit of Spanish. 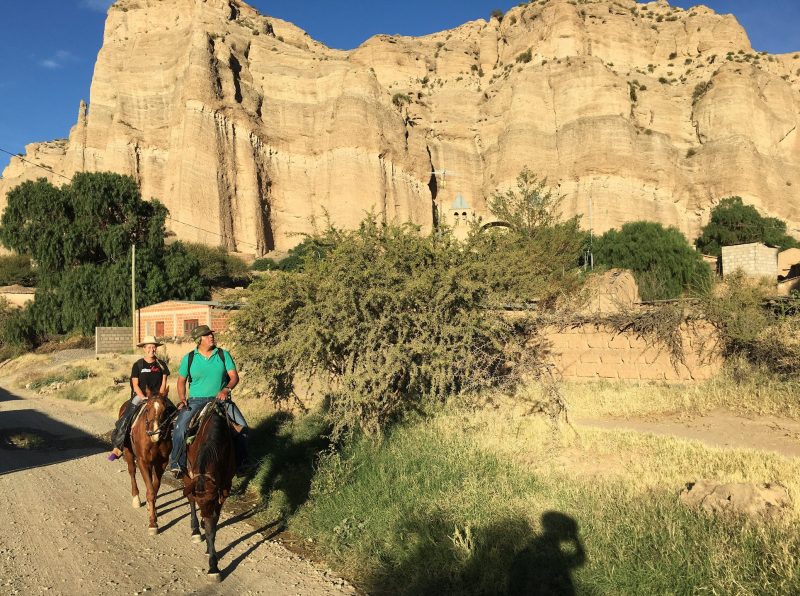 Knowing Spanish will make your trip EXPONENTIALLY more interesting (like when I got my foot stomped on by a horse and had to ride 7 hours with a busted-up foot, drugged out on South African painkillers, at least I could have a very strange conversation about Israelis with my guide). Very little English is spoken outside of hostels and tourist shops.

At the same time, knowing Spanish also makes your experience safer. This is extreme, but do you know how to communicate that you’re having a medical emergency and need to go to the hospital? That you’ve been robbed and need to see the police? That you’re lost and need help finding your hostel, as its about to get dark?

Take some Spanish lessons, download Duolingo, at the bare minimum get a little Spanish-English dictionary to carry with you that you can just point at.

I’ve had my fair share of wild experiences. But when you’re abroad, the best, safest, and most respectful way to behave is how the law indicates.

That means not partaking in drugs or other illegal activities, even when they abound and are plentiful and it seems like EVERYBODY is doing it (I’ll throw in another Dad-ism here: if everybody was jumping off a bridge, would you do it, too?).

There’s a booming coke scene in Bolivia, especially La Paz, with barely underground bars and nightclubs serving up the white stuff like it’s nothing more than a gin and tonic.

If you’re thinking about joining the crowd, first take a minute.

Aside from putting yourself at risk by coming into contact with sketchy people, and ya know – breaking the law: I’d like you to consider for a moment what a severe disrespect you’re doing to the country you’re visiting. Coke might feel fun or trendy in the US (and that is effing debatable), and seem relatively harmless (OMG is it not), but in South America thousands (hundreds of thousands?) of people have had their lives taken and their livelihoods destroyed, their neighborhoods made unsafe, their family members disappear because of this white powder.

Are you going to disrespect the people who have welcomed you into their country by continuing to support this industry?

I so firmly believe that you vote with your purchases and behavior, so buying coke and participating in making it seem okay to fellow tourists is VERY MUCH you supporting the industry, and all that it entails. 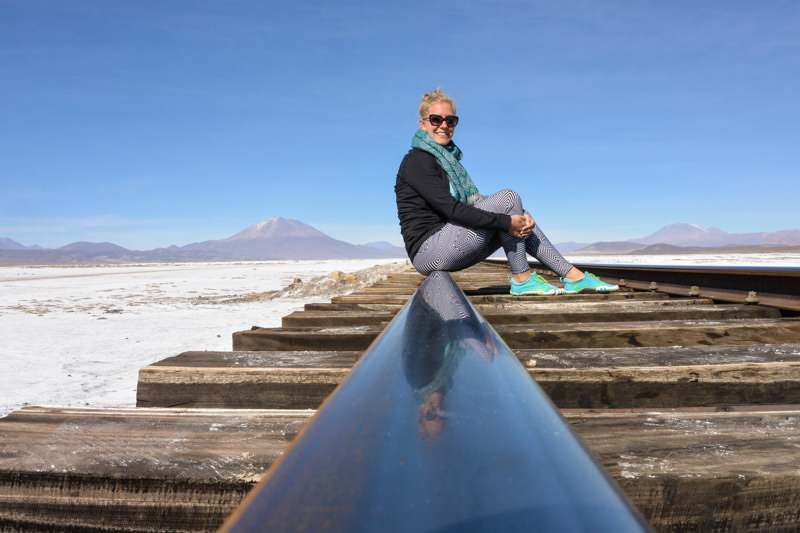 Fully covered, but still being me

Bolivia, in general, is much more conservative than Argentina or Chile. It’s also colder!

When considering your wardrobe, you’ll want to have covered legs especially and keep your shoulders covered.

Aside from being respectful, you’ll also feel less weird and more comfortable. I went out in shorts one day and was 100% the only one in the whole city of La Paz. I never did it again.

Dressing like a local also makes you blend in like a local, which means you stand out less, and look less cluelessly newbie, as a potential target for thefts and scams. 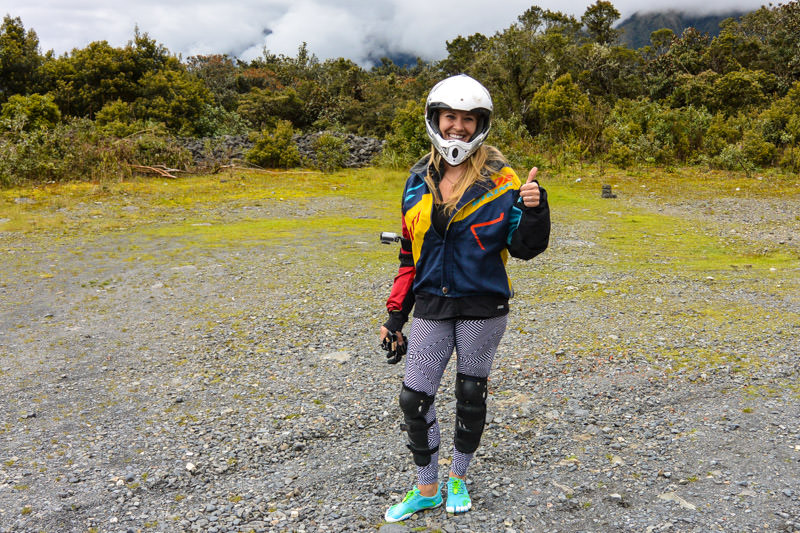 When you’re backpacking, you want to compare prices and go with the cheapest possible option. I get it.

But when it comes to adventure activities, this is NOT the way to go. Read reviews on TripAdvisor, talk to other travelers, post questions in the forum. Don’t just automatically go with the least expensive tour operators. This applies especially to the Death Road biking, Salar de Uyuni trip, and mine tours in Potosi (which I didn’t personally experience).

Go in person, if possible, or send an email if not, and ask all the questions. For Death Road biking: What kind of safety equipment is provided? Is any instruction or practice given beforehand? For Salar: How experienced are your drivers? What happens if the car gets a flat tire? What safety precautions do you have in place?

9. Let someone know where you’re at. 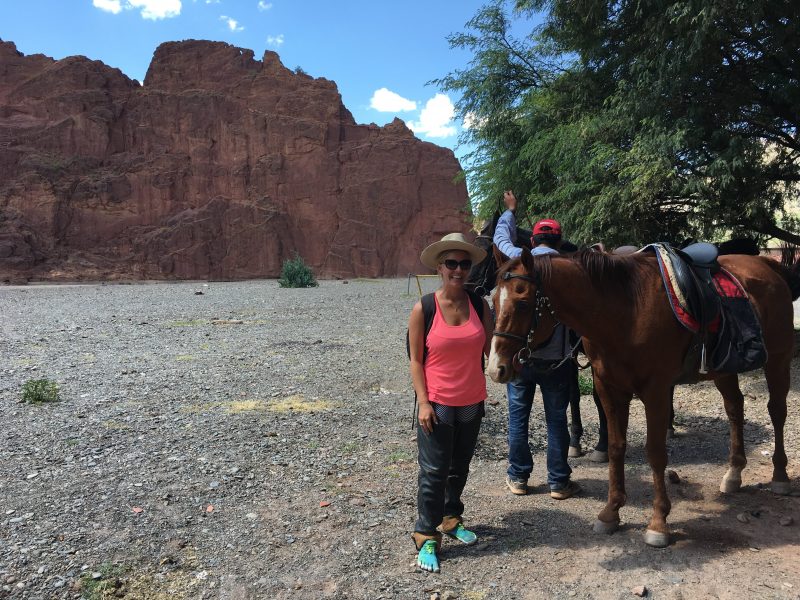 Text before I left: Hey dad, I’m going to be in the land of Butch Cassidy and the Sundance Kid sans-wifi for a few days!

But you’re a free-as-the-wind backpacker and this might throw a wrench in your spur-of-the-moment plans!

It really doesn’t. You’ve always got an extra second or two to send a text to your dad/bestie/sister to let them know what you’re up to (and I’m sure they’ll appreciate it).

Maybe this means booking your tours in advance, so you can take advantage of internet infrastructure to let your loved ones know you’re going to be wifi-less for a few days (like before an Uyuni trip). It’s important, for their peace of mind and your safety. Too many backpackers have gone missing lately, as much of a downer as that may be, if your family/friends at least know where to begin looking, they can get a running start to provide help if needed.

Pin it for Later: How to Stay Safe in Bolivia 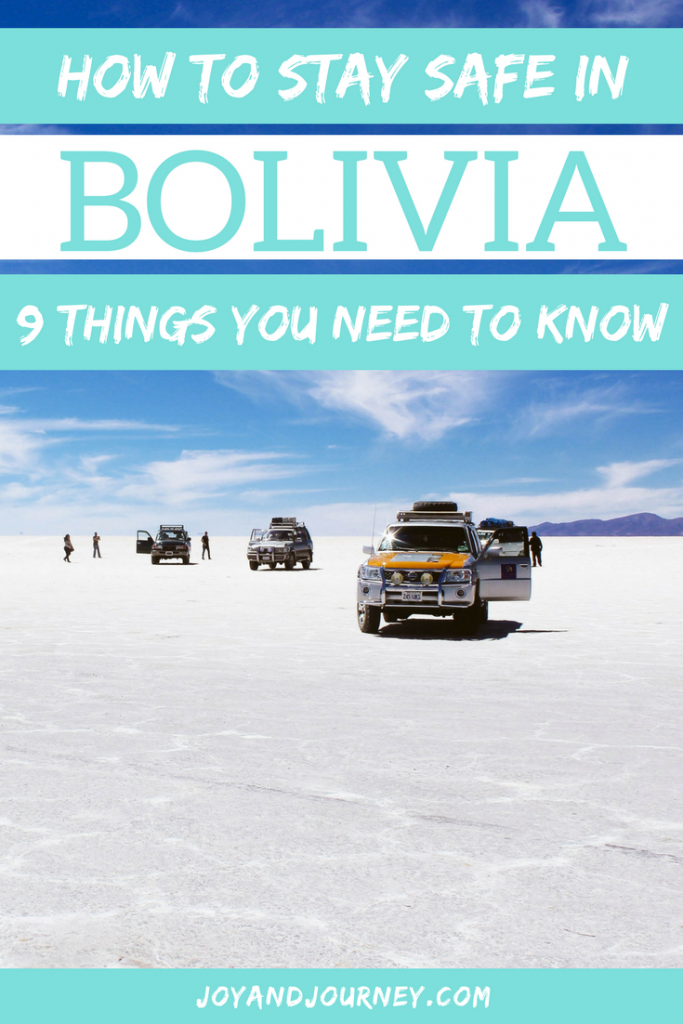 Do you have any favorite safety strategies?